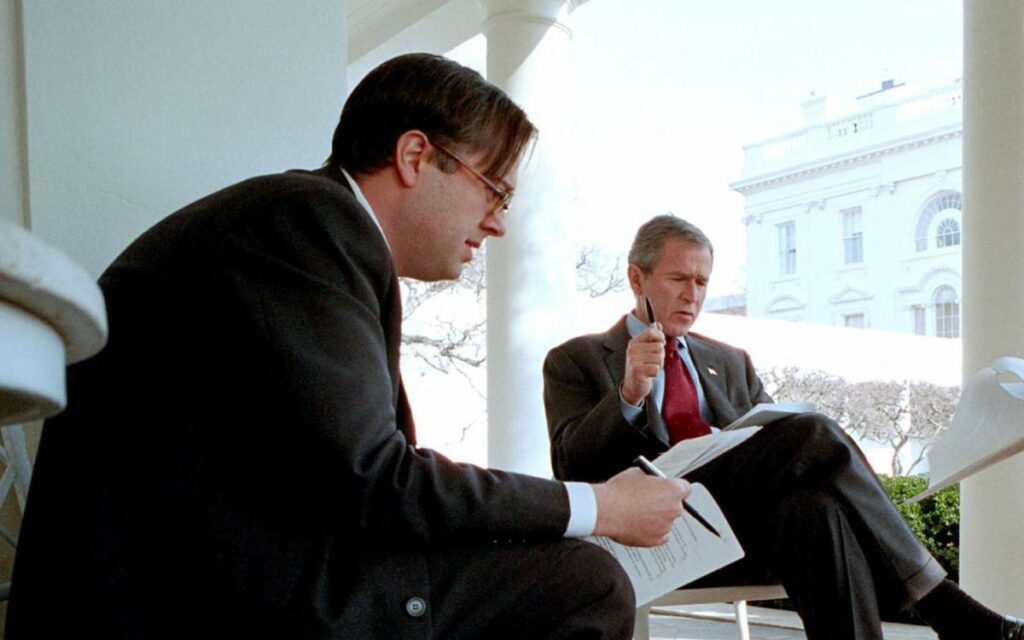 The recent passing of former George W. Bush speechwriter, Michael Gerson, reminds us all that profiles in courage still exist. Gerson, an evangelical Christian, wrote beautifully about life and public policy. More than that, he held strongly to his beliefs in a compassionate conservatism while most in his party followed a different path.

This piece tries not to defend Gerson, nor take a position as to his political leanings. Examining Gerson’s role, however, does interest this writer because his struggle with the changes in the Republican Party has been renewed with former President Donald Trump’s recent announcement that he intends to reclaim his former post.

Gerson, born in 1964 in New Jersey, grew up in St. Louis, Missouri, as middle America as there is. The heartland exudes qualities of responsibility, patriotism, modesty, humility, and a hardy sense of character. Gerson solidly displayed all of these from a young age. His upbringing in an evangelical Christian home included schooling at Westminster Christian Academy.

Gerson began a program at Georgetown University, but after one year transferred to Wheaton Bible College from which he graduated in 1986. His meteoric rise in Republican politics began in the 1990s. After working on some speeches for Bob Dole, the 1996 Republican nominee, Gerson rose to great prominence as President Bush 43’s chief speechwriter.

When 9/11 occurred, Bush faced the task of preparing the nation for war, comforting a country that had suffered loss, and uniting a people for the difficult and uncertain months and years ahead. Gerson’s stirring words helped Bush lift the hurting republic.

For those of age at the time, Bush’s most memorable words remain etched in the nation’s consciousness, “We learn in tragedy that His purposes are not always our own. Yet the prayers of private suffering, whether in our homes or in this great cathedral, are known and heard, and understood. There are prayers that help us last through the day, or endure the night. There are prayers of friends and strangers that give us strength for the journey. And there are prayers that yield our will to a will greater than our own.” And there was more: “This world He created is of moral design. Grief and tragedy and hatred are only for a time. Goodness, remembrance, and love have no end. And the Lord of life holds all who die and all who mourn.”

Mr. Gerson’s later columns for The Post took many shots at President Barack Obama during his two terms, calling his foreign policy undisciplined and the Affordable Care Act — and its bid to move the nation toward universal health care — shambolic. However, with the rise of Trump, Mr. Gerson found himself outside looking in. He bemoaned that many in the Republican Party — including fellow evangelical Christians — shifted allegiances to Trump despite what Gerson called his record of lies, infidelities, and racist remarks.

But Gerson acknowledged that, for the moment, he was on the weaker side as a Trump critic. “It has been said that when you choose your community, you choose your character,” Mr. Gerson wrote in an essay for The Post this past September 1. “Strangely, evangelicals have broadly chosen the company of Trump supporters who deny any role for character in politics and define any useful villainy as virtue.”

Most Trump supporters object to criticism of Trump on any grounds, but the one that I have found most irritates them focuses on his personal life. Their arguments seem to follow a logic hard to reconcile. Although character meant something when Bill Clinton held the office of Chief Executive, Mr. Trump’s past peccadilloes earn a pass because he promises to right the wrongs of the establishment.

The unfortunate part of this thesis withholds the truth that Democrats for many years, including the 2016 election when The Donald faced Mrs. Clinton, excused Mr. Clinton’s excesses because he took the right positions on the issues. Whether Trump’s supporters acknowledge it or not, their rationalizing of Trump’s behaviour sounds strangely similiar to what Democrats did after Clinton used his position of power to gain sexual favours from an intern. Gerson calling them out only pushed him further from the centre of the party into a certain obscurity in the newly Trump-dominated machine. The exile, however, made Gerson more determined, brave, and resolved.

His essay, Trump Should Fill Christians with Rage. How Come He Doesn’t? published in the Washington Post less than two months before his passing, brings clarity to his concerns. In a ringing indictment of evangelical misdirection, Gerson writes, “This view of politics is closer to ‘Game of Thrones’ than to the Beatitudes. Nowhere did Jesus demand political passivity from his followers. But his teachings are entirely inconsistent with an approach to public engagement that says: ‘This Christian country is mine. You are defiling it. And I will take it back by any means necessary’.” He adds, “By assaulting democratic and religious pluralism, this agenda is at war with the constitutional order. By asserting self-interested rights, secured by lawless means, this approach has lost all resemblance to the teachings of Christ. A Christianity that does not humanize the life of this world is not Christianity.”

The more I read Gerson’s writings, the more I reflected inward about my own faith. Too often a vengeful attitude has replaced the forgiveness and grace I confess; too often my willingness to accommodate name-calling, ostracism, and marginalization overwhelmed the need to invite, listen, protect, and invest in those with whom I disagree. As my pastor, Carl Santos, has often reminded his flock, Christians should seek to be ambassadors and reconcilers.

Gerson seemed to not only know that, he lived it. In response he suffered the slings and arrows of the Trump faction. Gerson wore the derogatory title, RINO (Republican in Name Only), despite having credentials that far exceeded most Trump enthusiasts, who in many cases, joined the Republican Party on the shoulders of men like Gerson.

Mourning Gerson’s passing not only brings to the forefront the struggle within our American cousin’s conservative movement, it sheds light on the fact that as Christians within that movement we bear responsibility for what serves as political fodder. The ugliness of insults, the belittling of communities, and the ignoring of long-held traditions debase us further. Christ confronted the leading figures of His day with both correction and forgiveness. He also used the truth to convey a message of hope, selflessness, and humility. Gerson spoke candidly about these attributes as did many before him who the Trumpists have no problem trampling.

More people like Gerson are needed in our politics today and less like those who so readily ignored his writings and his warnings for a movement most often thought of as Christian as conservative.