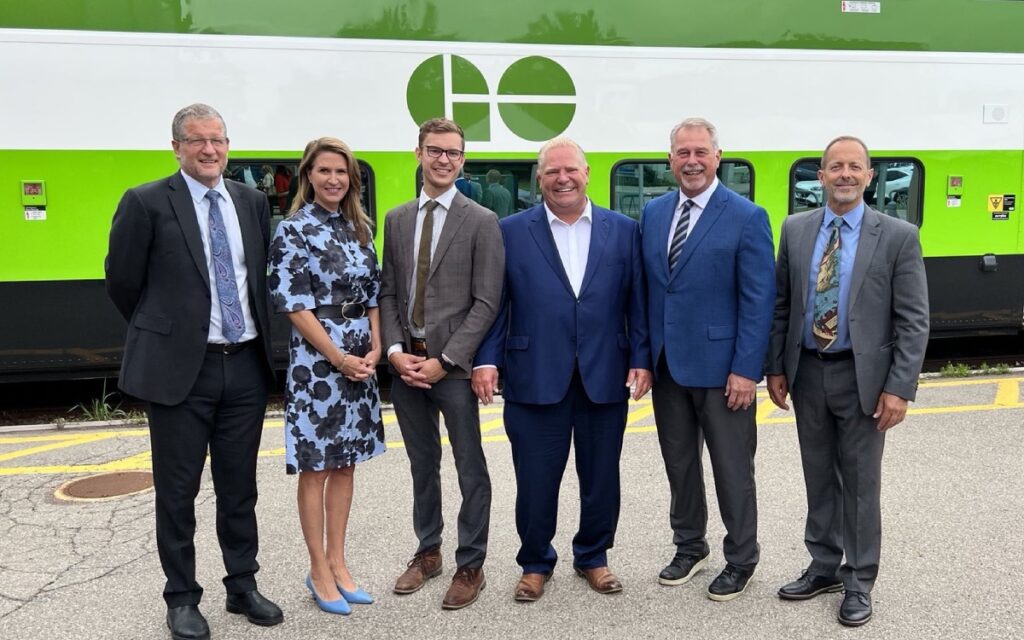 The service was originally introduced at the end of 2019 but was suspended due to the pandemic. Direct rail service on weekends was restored for spring and summer 2022, but was set to expire mid-October. Friday’s announcement extended the direct weekend service year-round. From left to right: Metrolinx president and CEO Phil Verster, Minister of Transportation Caroline Mulroney, Niagara West MPP Sam Oosterhoff, Premier Doug Ford, Minister of Tourism, Culture and Sport Neil Lumsden, and Mayor of Niagara Falls Jim Diodati. Photo credit: Twitter/Doug Ford

After a brief pandemic-induced hiatus, year-round daily GO train service between Niagara Falls and Toronto is set to return Oct. 15, 2022.

The service will include two roundtrips per day, every day of the week including weekends.

Premier Doug Ford, Minister of Transportation Caroline Mulroney, and Minister of Tourism, Culture and Sport Neil Lumsden were all on hand Friday afternoon at the Via Rail station on Bridge Street in Niagara Falls for the announcement.

“Bringing back GO service 365 days a year will make it easier for everyone to access this incredible destination and will boost local businesses all across this region,” said Premier Ford. “Our government is getting it done for transit riders across the Greater Golden Horseshoe.”

The province originally introduced daily GO train service between Niagara and Toronto in September 2019. However, the weekend service was suspended soon thereafter due to an “unprecedented” drop in ridership during the pandemic.

Direct rail service on weekends was restored for spring and summer 2022, but was set to expire mid-October. Friday’s announcement extended the direct weekend service year-round indefinitely.

“As ridership returns to pre-pandemic levels, our government is boosting service to meet demand. GO service to Niagara will unlock access to this key tourist destination and help build Ontario’s economy,” said Minister Mulroney. “This service enhancement is another step towards our government’s mandate of fighting gridlock by delivering more frequent GO rail service across the Greater Golden Horseshoe.”

“No one wants to sit in congested highway traffic and getting back on track with more frequent GO Trains allows people to travel seamlessly between Niagara Falls and Toronto,” said Mayor of Niagara Falls Jim Diodati, who was also in attendance Friday afternoon. “A big thank you to the Province of Ontario for ensuring this remains a priority.”

“We look forward to a regular GO schedule being re-established in the near future, which will change the way that people can live and work between Niagara Falls and the GTA.”

GO rail will become one of the busiest railways in North America with over 200 million annual riders by 2055.

With rider demand increasing every year in Ontario, the province continues to work alongside transit partners including Via Rail for the use of their stations and CN for access to the corridor.