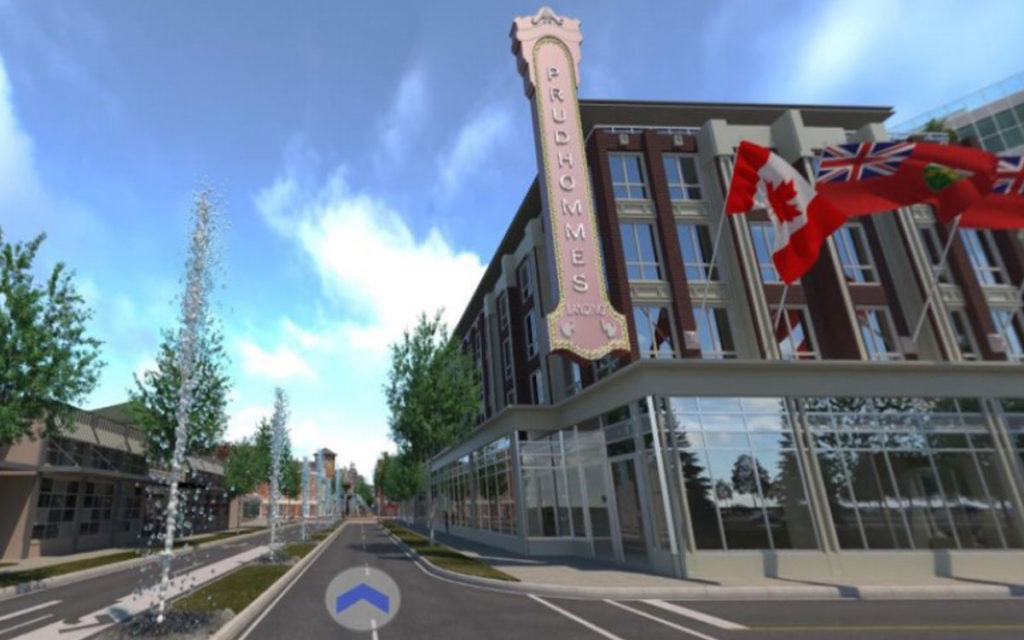 An artist’s rendering of the main street in the proposed Prudhommes development in Lincoln.

This week, members of Niagara Region’s Planning and Economic Development Committee, Chaired by Councillor Selina Volpatti, got a look at what the proposed development on the old Prudhommes land will look like on Wednesday and it was met with overwhelming support.

Presented by John Ariens of project consultants, IBI Group, the planned development is to be diverse and walkable with a mixed use waterfront. Councillor after councillor praised all those involved in the project. Niagara Falls Councillor Bart Maves said; “To have this many groups of people arrive at a generally agreed upon plan in this day and age in Ontario is almost a miracle.”

Fort Erie Councillor Sandy Annunziata agreed with Maves on how impressive it is to see so many groups working together on this project. “The media has a habit of pitting different sectors against each other. For some reason development has become a four letter word in Niagara. It’s not pro-development or pro-environment, it’s pro-commonsense,” he said.

The design incorporates best practices in community building including socially, economically and environmentally. It will be a mixed use development that will incorporate low and high rise residential, commercial space and a streetscape that will be designed to promote walking and cycling which will include a trail network.

Staff reported that the Ministry of Transportation is satisfied with the existing QEW interchange and noted that if improvements need to be made they can be done using the existing infrastructure.

Regional Councillor from Pelham and a Niagara Escarpment Commissioner, Brian Baty, said the project “has the potential to be quite a gem.”

It’s anticipated there will be 1,700 units. The design includes a waterfront park and civic square. The waterfront promenade will be home to condos modest in height – four to six stories.

Ariens said there will be “a huge amount of public open space” and that it will be a complete community, a sustainable environment first community with good urban design. He went on to say that the next steps include a draft plan and zoning early next year, followed by detailed engineering designs. “The earliest we can reasonably expect construction is next fall,” he stated.

St. Catharines Councillor Brian Heit said of the proposed development; “We talk about attracting people to Niagara and by what I saw today, that’s what’s going to attract people to Niagara.”

Heit’s St. Catharines colleague Bruce Timms said he was; “especially impressed by the progress that has been made in reclaiming the waterfront for the public in this project.”

When contacted after the meeting, Regional Chair Alan Caslin said; ““The adoption of the Prudhommes Secondary Plan is a prime example where the Niagara Region, a local area municipality and local residents have come together to work cooperatively in building our Niagara community.  Together, we have created a vision for Prudhommes that will include mixed use developments, public access to waterfront and natural environmental features complimented by active transportation networks.”

One of Chair Caslin’s opponents in the upcoming election was also impressed with the development plans. “It’s a great plan for the area and a great gateway for Niagara,” said Pelham Mayor Dave Augustyn.

Councillor Bill Hodgson who represents the area soon to be developed said he was happy with what the plan looks like. “I’m very pleased to see the urban design that’s been incorporated and the protection of the waterfront for the public.”

The last word went to the Lincoln’s Mayor, Sandra Easton who spoke about the long process getting to this point and recognized the help she had by both Regional staff and consultants in getting to this point. “It’s not a question of development it’s a question of smart development,” she said. “It has been a very good process and absolutely we should be proud of this.”