Reality Check: Let’s Bury the Harris Health Care Myths Once and for all 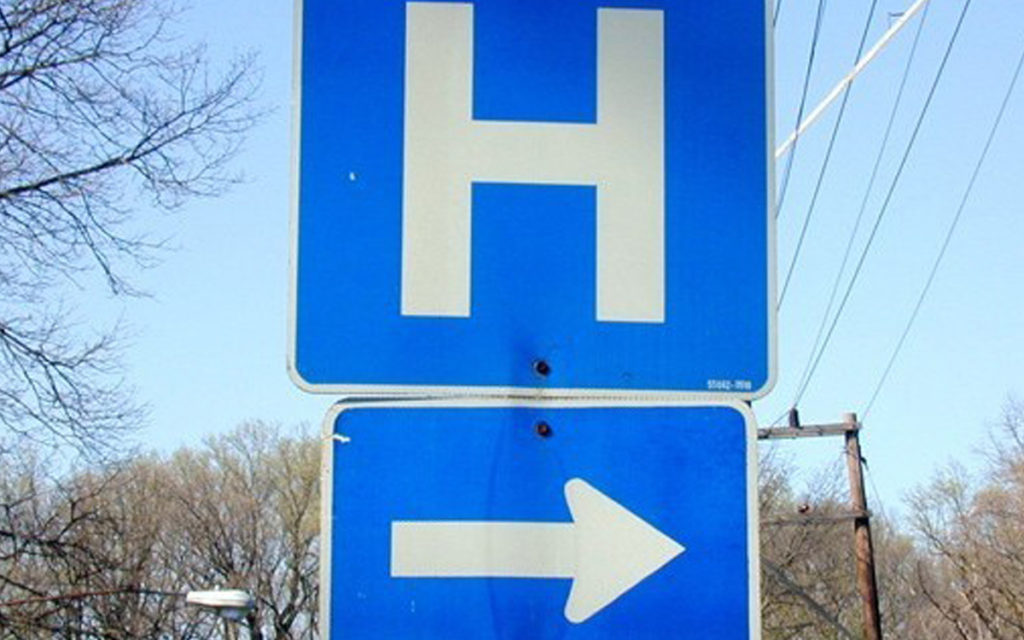 Another provincial election is upon us.  While you would think that political types would have moved on from the distant past and instead be more concerned about telling voters about their plans for Ontario’s future, residents of this province are once again being exposed to horrifying tales of the 1990’s.  It’s like Bob Rae and Mike Harris had both still been in office throughout the last 17 years.  As a reminder Harris retired as Premier in 2001 and Rae was deposed of in 1995.

While time has lessened the Liberal and Tory retelling of tales of tax hikes, financial mismanagement, legislative and regulatory woe – wrought upon the province by Bob Rae and the NDP from 1990 to 1995 – the same cannot unfortunately be said of Liberal and NDP fearmongering and myth telling about Mike Harris.

So let’s revisit the time period, specifically in the health care sector.  Year after year Liberal and NDP leaders and candidates trumpet out the same old Harris government ‘facts’ about the former Premier’s health care record.  The claims will be familiar to all – slashed funding, closed hospitals, fired nurses and so on.  With the help of a former Minister of Health and a health care industry consultant – let’s put some of the mythology to bed once and for all.

Myth 1: Did Harris cut health care funding?  Fact: The Mike Harris Progressive Conservative governments reallocated money within the health care system, but never cut funding one year to the next.  For a quick end to this discussion, the graph below is from the Ontario Ministry of Finance including the figures from the Ontario Liberal Budget of 2004.  Even the Liberal authors demonstrate that Harris never cut health care funding. 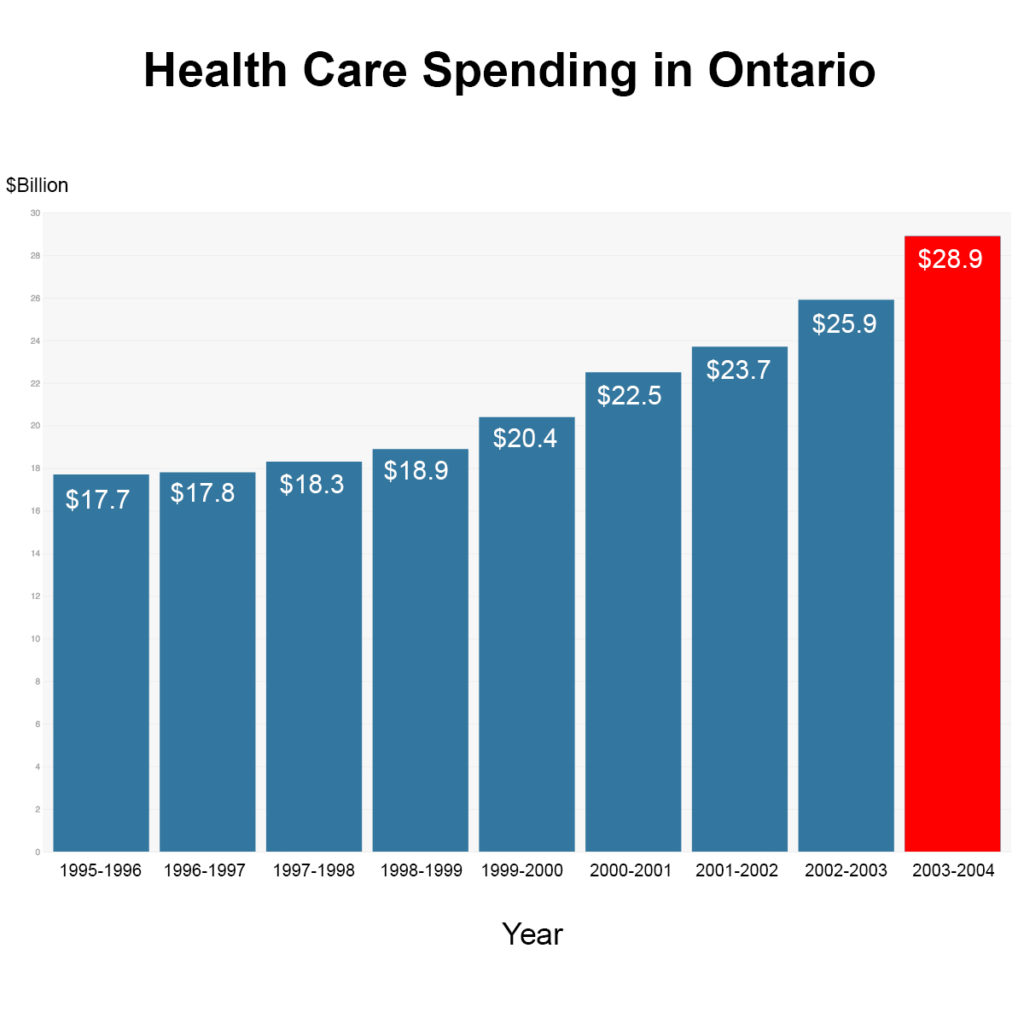 What is true is that Jean Chretien and federal Finance Minister Paul Martin cut health care transfers from the federal government to the provinces substantially starting in 1993 (saddled Bob Rae).  In 1980 federal/provincial funding for health care was 50% federal and 50% provincial.  By 2003 it was 17% federal and 83% provincial.

Myth 2: Harris closed 28 (or 40 depending on the tale teller) hospitals. Fact: Harris rationalized hospitals and hospital administration.  He “closed” some old out of date hospitals and replaced them with modern state-of-the-art new ones and merged many administratively.  If, as the Liberals did in St. Catharines, Harris closed two in a community, he usually built a new one to replace it.  His opponents never cared to talk about the new hospitals.  Also, with the help of the independent Health Services Restructuring Commission, Harris took three separate hospitals, each their own corporation, and put them under the umbrella of one hospital corporation – because the old corporations on paper ceased to exist, his detractors chalked up it up as three closed hospitals.  The hospitals were all still there and operating normally, but under new names.

As one health care consultant noted, “Premier Harris appointed an Independent Commission that made recommendations to his government on how to make hospitals more effective and efficient.  There was no closing of hospitals but amalgamations of corporations in the same city. These amalgamations have worked very well for most regions that undertook the commission’s recommendations.  It made the delivery of health care more effective and that is a positive legacy of the Harris government.  In fact, these amalgamations have continued on with many hospitals in Toronto, Hamilton, London and Kingston choosing to follow the model”.

Myth 3:  Did Harris fire 6,000 nurses?  When Harris came to office in 1995, there was a predominant hospital issue in Ontario known as ‘bed blockers’.  This term mainly referred to the thousands of elderly people who were too frail to go home but not sick enough to be in an acute care hospital.  There were many health care professionals having to look after these folks in hospitals.  Acting on health care professional’s advice; Harris took money from hospital budgets and put it into home care budgets.  There were dramatic increases in home care services and the elderly left the hospital beds, went home, and started to receive home care from nurses who were moved from the hospital system to the home care system.  According to critics, any nurse who changed employers or job description was calculated as having been fired by old Harris himself.

“Nurses were not fired, they moved from one corporation to the new corporation and got severance with the notice and were rehired immediately by the new corporations.  The government does not hire or fire nurses nor do they set their salaries.  Only independent hospitals can to this as they are not-for-profit organizations,” explained the consultant.

The big 3 myths then are just that. They have become truths when repeated over and over and never challenged.  But they are myths.  As a side note, during his tenure Harris:

Now that the writ is dropped and the games have begun in earnest – let’s agree to leave the mythology of two decades ago alone.  Maybe an agreement to debate what has happened in the last decade is fair. But more importantly – candidates should have more respect for voters and just tell us where they want to take Ontario in the future and stop revisiting where we have been in the past.

As the Hon. Tony Clement, Ontario’s Minister of Health from 2001 to 2003 says, “Through the mists of time the fables about Mike Harris’ cuts to health care have grown and grown. This analysis shows factually what happened and how health care spending grew, even as the top heavy administration was reduced.”

Reality Check: Let’s Bury the Harris Health Care Myths Once and for all

By Kevin Vallier Time To Read: 4 min
Provincial Polls are for Dogs
Opinion A Modest Proposal for Hydro One