Region CAO may be headed to China 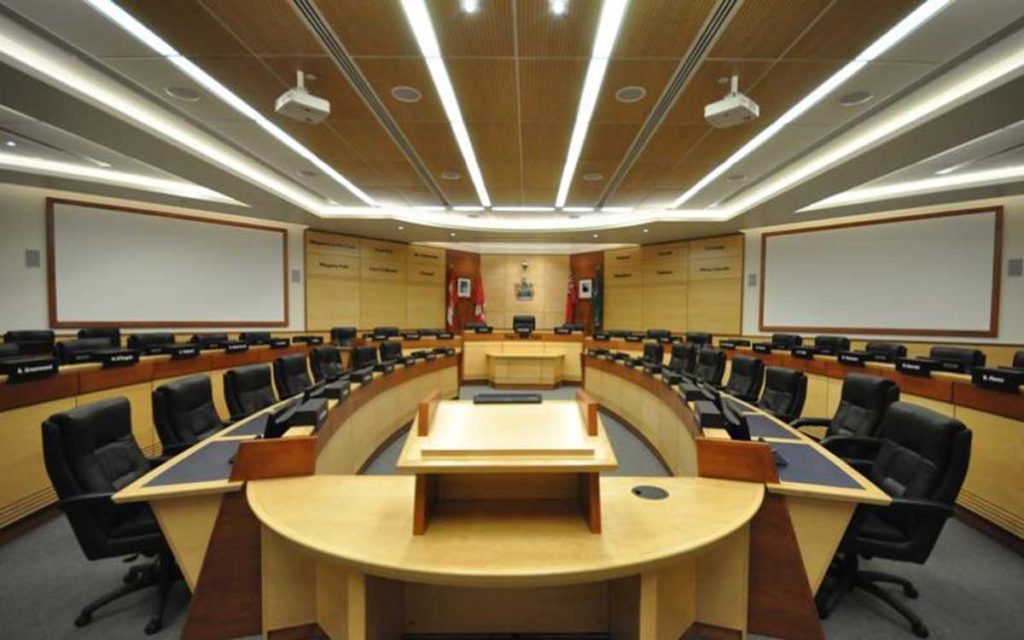 At last night’s regional council meeting, the last for many councillors who chose not to seek re-election or were not re-elected, regional chairman Alan Caslin was forced into casting a tie breaking vote on whether or not to send CAO Carmen D’Angelo to China as part of a trade mission. D’Angelo told council when providing an update on the mission that he had informed the organizers (private sector businesses) that he would not attend for fear of being a distraction to their good work. D’Angelo would be going in place of the Director of Economic Development who was already committed to attend the H2O conference and the Manager of Trade and Investment, whom D’Angelo recommended should attend, will also be out of the country at that time.

It was made clear that D’Angelo did not ask to attend but in fact was invited to attend as the most senior staff person at the Region.

Councillor Bart Maves spoke in support of allowing the CAO to attend, stating that the private sector led trade mission was in jeopardy at one point and that organizers said it may not have happened if not for the quick actions of D’Angelo and the Economic Development staff.  He scolded council for letting petty politics interfere with one of the most important trade missions the Region has ever had the opportunity to participate in.

Maves read a letter addressed to Regional Council from Larry Vaughan, President of CanadaBW who is leading the trade mission and has put up a substantial amount of his own money to make it happen. In his letter, Mr. Vaughan states: “These meetings overseas are crucial to the success of our trade mission and those of us that have been to China will tell you that any conversation must be balanced at the table, ensuring that the level of those attending from the Region have a similar scope of influence as our counterparts from China. This is why it is so important that a senior Regional official travel with us. Their support and influence will open doors to meetings that we would otherwise be excluded from.”

Mr. Vaughan said in the closing comments of his letter: “I trust that the Region will continue to support this private sector initiative and not allow local politics to interfere or cast any negativity on this important opportunity.”

Councillor Rigby said he was not opposed to D’Angelo attending for political reasons but simply that he had concerns about who would run the Region while he was gone given council was in a lame duck status. D’Angelo addressed that concern saying that he is available 24-7 while away and that he would appoint a senior commissioner to act in his place.

With the vote deadlocked at 12 “Yes” and 12 “No” the Chairman broke the tie and voted “Yes” stating; “I think this council has made a statement that we’ve wanted to be open for business from the very start. I think we have encouraged foreign business investment in Niagara and we’ve seen that in a number of cases, we’ve made significant efforts to work with the federal and provincial governments to establish a Foreign Trade Zone in Niagara, I think for those reasons and that the businesses engaged are asking for the CAO to attend, that it would make sense for the CAO to go and in that case I’ll vote yes.”

The motion stated that Mr. D’Angelo would attend only if there was full support of the private sector companies organizing the mission.

Those councillors not returning next term were given an opportunity to say their goodbyes to colleagues and staff at last night’s meeting.

West Lincoln Mayor Doug Joyner was first to speak stating he told his grandfather that one day he would be Mayor. He also said that despite some of the heated debates in council chambers over the years that 99 per cent of the time it was all quickly forgotten as he walked out of council at the end of a night. Joyner listed numerous items he is proud of in terms of the many accomplishments this council has achieved and the one prior.

An emotional Bob Bentley who has been an elected representative of Grimsby for 24 years and a member of Regional Council for 21 of those years, said he has seen a lot of good that has been done at the Region. He commended the “very determined and well intended staff as well as council members who’ve tackled a lot of battles over the years.”

Another long-serving councillor, St. Catharines representative Bruce Timms, who first took office in 1991, thanked the people of his hometown and the staff for all their support during his tenure. Timms specifically acknowledged former Senior Planner George Nicholson. “Without George we would not have the Greater Niagara Circle Route.” Timms was instrumental in making that project become a reality.

Thorold’s representative Henry D’Angela thanked his children noting they were born when he was first elected into political office and have traveled with him on his journey. He said they enjoyed most of it “except the grocery shopping at the local store when the conversations to go buy a loaf of bread take an hour”. D’Angela noted all councillors played a part in making Niagara better and they should all be proud of their work. He said his wife hasn’t fully supported his retirement from politics so he called on his fellow councillors to lobby her to support that motion.

Former MPP turned Regional Councillor for Niagara Falls said his parents, on one hand were so proud of him being in public office, while on the other couldn’t stand it because of what some people would occasionally say about ‘their son’. Maves, whose father recently passed away, said he had thick enough skin to take it but his parents never did. “My dad would be happy I didn’t run again,” he said. Maves pointed out that the majority of the time, particularly in committee, councillors got along and came to a consensus. He joked that even he and Dave Augustyn who were “often at loggerheads” would work together during meetings to craft recommendations and different motions.

Outgoing Fort Erie Councillor Sandy Annuziata thanked regional staff noting: “We have one of the hardest working most professional municipal staffs in all of Ontario.” He also noted that this council has invested the most amount of money in Fort Erie in the Region’s history during this past term.

David Barrick thanked his colleagues for their support for him in his role as Corporate Services Chair and Budget Chair working to keep taxes affordable for residents. He also thanked his colleagues for helping him keep the Port Colborne police station open. Barrick noted that his town actually received more money from the Region this term than it provided to the Region. He said he was glad to see that the smaller municipalities are starting to get their fair share.

West Niagara Councillor Tony Quirk thanked his colleagues for allowing him to take on a wide range of leadership roles, chairing a variety of committees. Quirk said one of his biggest regrets was not having a beer sooner with fellow councillor Kelly Edgar. Councillor Selina Volpatti was quick to point out that she paid for those beers.

Other councillors not returning next term who thanked staff and colleagues and shared their fondest memories of this past term included: April Jeffs, Garry Burroughs, Bill Hodgson, Debbie MacGregor, Selina Volpatti and Pat Darte.

Region CAO may be headed to China

By Kevin Vallier Time To Read: 5 min
Local What it takes to prepare a bid for a national curl…
Local PC’s to scrap Ontario College of Trades