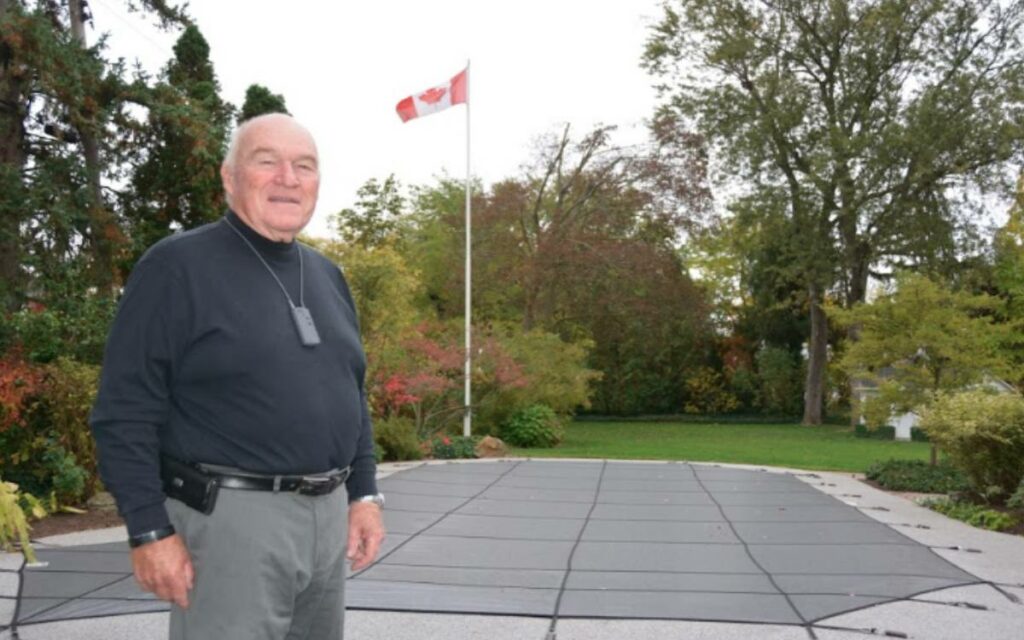 Tim Rigby in his backyard on Rockcliffe Road, St. Catharines

If Alex Trebek’s Final Jeopardy answer was “the still-active grand old man of Niagara politics,” one might reasonably answer “who is Jim Bradley?,” a long-time Liberal first elected to Ontario’s Legislature in 1977, who currently sits as Regional Chair. But if chronological age is the measure, Bradley, at age 75, concedes top spot to political veteran and octogenarian Tim Rigby.

It all started in 1996, when Rigby was an insurance broker in St. Catharines. His major community focus at the time was rowing, as he was a driving force to bring the 1999 World Championships to the Henley Course (a feat he has repeated for the 2024 regatta).

Rigby recalls that the late John Walker, one of Niagara’s most distinguished entrepreneurs and philanthropists, was the instigator in bringing a group of people together to cajole him into an election run as mayor in 1997. “I had some reservations, but my wife Gini was present during the pitch, and she said ‘you watch council meetings every Monday night on cable tv anyway, so you might as well get more involved,’’ said Rigby with a chuckle.

The late Barry Matheson, a lawyer friend of Rigby’s who later served as a superior court justice, sat Tim and Gini down and told them he supported his run at elected office, but wanted them to know exactly what they were getting into, underscoring the loss of personal and family time.

Al Unwin, a retired school principal, sat in the mayor’s chair in St. Catharines at the time. Rigby respected Unwin, and decided that he owed him the courtesy of telling him to his face that he planned to run, so he made an appointment to see the incumbent. “I expect he thought I wanted to talk about rowing,” said Rigby with a grin, “but I told him that I was putting my name forward for his job. His response was ‘Thank God! Would you do me that favour?’ He had decided that being the mayor was not a good fit for his personality, and had no plans to seek another term.”

Rigby took 42 percent of the ballots cast and won the election by 3,000 votes over runner-up Rick Dykstra. He soon discovered that, true to Justice Matheson’s forewarning, it was pretty much a 24/7 gig. “I instituted a rule in my office that on Sundays, that’s my family day, and I’m not doing anything mayoral. Period. And it had nothing to do with religion,” said Rigby.

Persuasiveness is a desirable, even necessary, attribute in a politician, and Rigby had it in spades. His friend and former publisher of the St. Catharines Standard, John Lehnen (now a financial development consultant) recalled coming off the water on Henley Island, having just enjoyed an exhausting rowing workout in his single. He was carrying his boat, balanced precariously on his head, back to the shellhouse, when he was cornered by Rigby, who insisted that the two of them should become co-chairs of the impending 1999 Worlds. Rigby didn’t let up until he got Lehnen to come on board.

“You need to have good people around you to get things done. If there’s something that you believe in, you have to be able to persuade people, otherwise you’re just not going to get anywhere.” said Rigby, matter-of-factly.

It was in his third term as mayor when his world was shaken by the death of his son, Tim Jr., in a 2005 industrial accident. “That did it for me,” said Rigby. “I couldn’t have run another time. There was just too much emotion weighing me down.”

A list of accomplishments under Rigby’s tenure as mayor includes the 2005 merger of the hydro utilities of St. Catharines and Hamilton (the profits from which helped partially fund the 5,300 seat Meridian Centre, according to Rigby). The four-pad arena was built on St. Paul Street West, and the downtown Market Square and new courthouse took shape. He worked to find solutions for homelessness and affordable housing in the city, initiated the conversion to two-way traffic in the downtown core, and engaged Brock University’s administration in conversations which culminated in the downtown performing arts centre a few years later. Rigby’s most controversial decision was leading city council in approval of a high-rise condominium project on the Port Dalhousie waterfront in 2006, which started the historic community on a 14-year development rollercoaster.

“It was a privilege to be the mayor of the City of St. Catharines, and I enjoyed every minute. It was hard on my family…but we survived,” said Rigby.

The allure of the political arena was still pulsing through his veins, and Rigby decided to throw his hat in the ring for a spot on Regional Council in the 2006 municipal election. He was narrowly defeated for the sixth and final seat, but ultimately was appointed to Council when Peter Partington was elevated to the role of Regional Chair.

Rigby admits that the wired world of the internet has added a new layer of complexity, and at times aggravation, to the job. It has become relatively commonplace for councillors to exchange shots at each other publicly using Twitter and other social media, in order to sway public opinion or intimidate the voting behavior of their peers. Those in public service routinely risk shaming and ad hominem attacks on Facebook for their stance on controversial topics.

“There are emails that I get from certain individuals that I don’t even bother opening,” said Rigby. “I just delete them. I know what they’re about.”

Rigby was criticized recently for failing to support a motion in favour of extension of the Region’s mandatory mask bylaw.

“We had a number of presenters at the video-conferenced meeting raising doubts about the efficacy of the wearing of masks to prevent COVID infections from spreading,” said Rigby. “I was queued up to speak, and then the debate was curtailed. I wanted to hear from Dr. Hirji (the Regions’ Acting chief Medical Officer), but didn’t get the chance. I was ticked off about it, so I voted against the motion.”

It wasn’t long before people were lighting up social media sites, claiming Rigby was an “anti-masker.”

The Ontario government had already mandated the use of face coverings in public spaces across the province, but Rigby isn’t satisfied. “Frankly, I think we need to have our own bylaw on the issue,” he said. “We should tell the province to stop putting everybody in one basket,” referring to pandemic levels in Toronto, Peel, and Ottawa far exceeding those of Niagara or other municipalities.

Niagara Region procurement issues have been a concern over the years, primarily in the Public Works department, where Rigby has served as chair or vice-chair for over a decade. Think Niagara-on-the-Lake waste treatment plant, Burgoyne Bridge, and the stink raised by the recent biosolids contract. Rigby acknowledges that work needs to be done on the procurement process, but dismisses as unproven any insinuations of collusion and tendering improprieties.

“In the case of the Burgoyne Bridge, the consultant gave a low estimate in the first place. We had a choice not to do that project, to cancel the contract, and go back to redesign and tender (adding two or three years to the process). The other option was to accept the lowest pre-qualified tender, which is what happened. I took a lot of heat….that’s okay,” said Rigby.

As to possible future amalgamation amongst the Region’s12 sub-municipalities, Rigby responded, “I don’t see St. Catharines and Niagara Falls ever merging, but Wainfleet and Pelham, perhaps. Maybe Lincoln and Grimsby. There are a lot of positive things going on….the communities are talking to each other.” Rigby sees some consolidation of the economic development departments in Niagara, which are “doing a good job and working more closely, which was not always the case.”

As to the current state of Regional Council, Rigby said, “I would like to see Council become more proactive, to start talking in a more positive way. We’ve got to stop locking doors on people.” But he feels that the level of civility amongst his peers is improving. “I think members respect each other. One or two councillors are a little bit over the top at times, but that’s to be expected.”

Rigby has been the recipient of several awards and medals, including the Queen’s Jubilee Medal and the FISA (international rowing federation) Gold Medal, and was inducted into the St. Catharines Sports Hall of Fame in 1996.

Now serving his seventh term at the Region, and at 80 years of age, the question remains as to whether he has it in him for an eighth term.

“I can’t say that I’ve given much thought to running or not running. It’s not something I would rule out, because I don’t know if Gini would let me. She likes me out of the house,” Rigby said with a laugh. 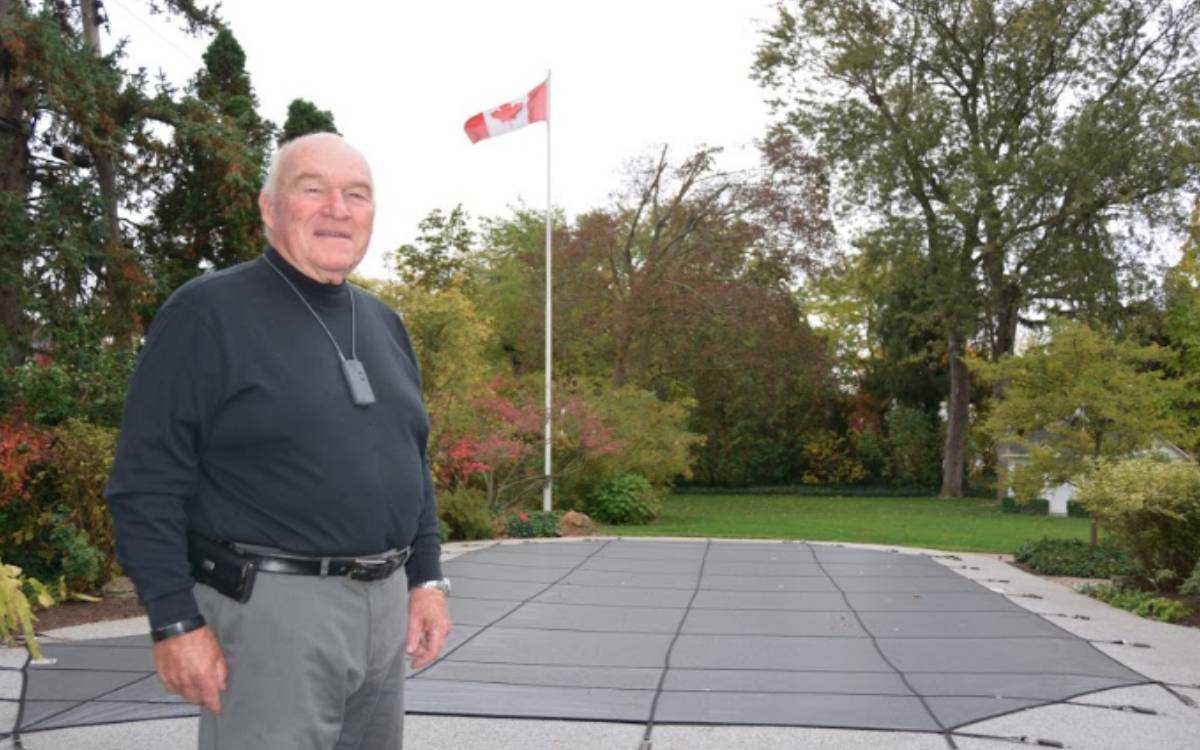