Remembering the Oilers’ 2006 playoff run that rallied a nation 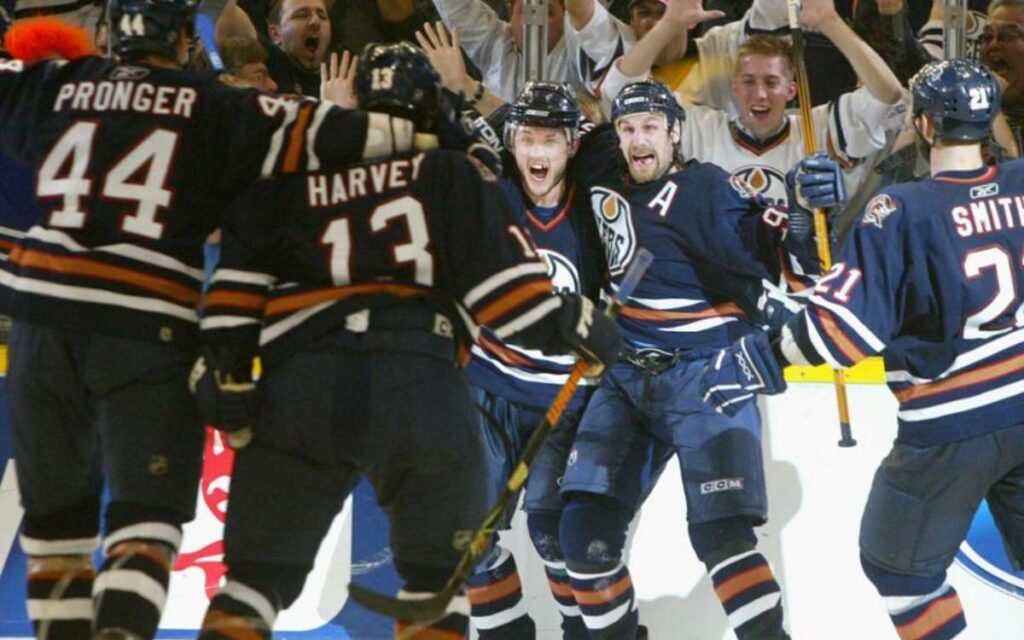 Edmonton Oilers assistant captain Ryan Smyth celebrates with Shawn Horcoff after the latter scored on the San Jose Sharks during the third period of Game 6 of their NHL Western Conference semi-final playoff game in Edmonton, Alberta, May 17, 2006. Photo credit: NHL

It is playoff time again! Many of us are keenly watching our beloved teams compete for the most coveted prize in Canadian sports. The Battle of Alberta, culminating in Connor McDavid’s memorious overtime goal sending Edmonton to the Western Conference Final last week, has taken the energy to a whole new level! The 22’ Oilers bid has many fans thinking back to another historical run.

It has been nearly thirty years since a Canadian franchise won the Stanley Cup. However, the 94’ and 11’ Canucks, 04’ Flames, 07’ and 17’ Senators as well as the 21’ Canadiens embarked upon ambitious quests for greatness. In many of the aforementioned cases, the teams embraced the identity of the underdog and advanced much farther than anyone ever imagined. There is one more team, not listed above, that is perhaps the most remarkable story of them all: the 2006 Edmonton Oilers.

In 2006, I was 7 years old, living the dream in Niagara Falls. It was my first year following the playoffs in depth. In school, I was learning the geography and uniqueness of Canadian cities. I had great fun cheering on Canadian teams from across the country. Unfortunately, Montreal and Calgary suffered first-round exits. Ottawa found itself the victim of an explosive Sabres’ offence in numerous decisive Round Two overtime matches. By early-May, there was only one Canadian team left.

Edmonton was the 8th seed in the Western Conference. Their first-round opponent was the President’s Trophy Champion Detroit Red Wings. Detroit had won three Stanley Cups in eight seasons. Edmonton was a perennial bubble team. This was a David and Goliath match-up.

After a tight Game 1, the Wings prevailed in 2OT. In Game 2, the Oilers nursed goals from Fernando Pisani, Brad Winchester and Chris Pronger to a victory. Game 3 saw Edmonton secure their own 2OT victory. The Wings knotted things up in Game 4. After a scoreless 1st period in Game 5, Edmonton bust the doors open with three goals in 7 minutes, taking a 3-2 series lead. The Wings capitalized on offensive opportunities to go up 2-0 in Game 6. Then, Pisani scored not once but twice early in the third. The Red Wings retook the lead with 10 minutes left. With under 5 minutes to go, Ales Hemsky cashed in his first goal of the playoffs. Then, with a mere minute left, he contributed the winning goal. The fans went bananas. The Oilers had slain a dragon. It was one of the most exciting games millennial kids had ever seen.

Edmonton faced off against the San Jose Sharks in Round Two. The Sharks were coming off a decisive victory against the Nashville Predators. There was no doubt San Jose was a formidable opponent.

The first two games were low scoring. The Oilers struggled to keep pace and dropped both matches at HP Pavilion. A back-and-forth Game 3 saw the Oilers squeeze past San Jose 3-2 in 3OT. San Jose jumped out to an early lead in Game 4. I remember watching the first period on Friday night while we gave my dog a bath. I woke up on Saturday morning and Edmonton had rallied late for a thrilling 6-3 comeback. Game 5 was a nailbiter well into the latter stages. Edmonton would build a lead, yet San Jose always answered. The Oilers stuck to their game plan and capitalized on multiple power-play chances. Another 6-3 victory was secured. Michael Peca and Shawn Horcoff thrilled the home crowd with respective goals in Game 6. Dwane Roloson got the shutout. Edmonton had rallied from a 2-0 series deficit to defeat yet another postseason giant.

The Western Final had the Oilers matched against the Mighty Ducks of Anaheim. Anaheim dropped the 2003 Stanley Cup to the New Jersey Devils in Game 7. They then suffered a disastrous 2004 campaign before a tremendous revival post-lockout. Edmonton knew their work was cut out for them.

Roloson continued his steady performance and limited Anaheim’s offence to a mere two goals in two games. The Oilers, for their part, managed to steer early leads in both matches to road victories. The series shifted to Edmonton with the Oilers in control. In Game 3, Edmonton defended a 1-0 lead going into the 3rd. A crazy final period saw both teams break out with offensive heft. The Oilers came out on top once again with a slim 5-4 victory. The Mighty Ducks were determined to stave off elimination. They built a strong three-goal lead, early in Game 4. While the Oilers attempted to make a comeback, the final score was 6-3. Anaheim had a strong start in Game 5 and got the opening goal… a one-timer from Francois Beauchemin. Edmonton rallied in period two with a pair of their own. Roloson was perfect, from here, and the Oilers secured their first birth in the finals since 1990.

These Stanley Cup Finals were among the most non-traditional matchups in league history. The west, of course, was represented by the Edmonton Oilers. The east, for its part, offered the Carolina Hurricanes. Neither Carolina nor Edmonton had made the playoffs in the previous season. While Carolina was a higher seed, Edmonton had proven itself a worthy adversary.

The Oilers jumped to a 3-0 lead in Game 1. Dwayne Roloson was injured early in the 3rd. This was a crushing blow to Edmonton’s momentum. The Canes capitalized on the Oilers’ rattled spirits and completed a shocking comeback. Final score: 5-4. Carolina built on their confidence in Game 2, dealing Edmonton their worst defeat of the playoffs: 5-0. The Oilers bounced back with a stellar offensive and defensive performance in Game 3 with a 2-1 victory. In Game 4, the tides changed once again as despite scoring first, the Oilers suffered another loss. Game 5 back in Carolina was about as crazy as you could get. After a long back and forth struggle, the Oilers and Pisani prevailed in overtime, denying the Canes a storybook ending on home ice. Game 6 was magical. After a scoreless first period, Edmonton delighted their fans with

I remember the anticipation heading into Game 7. It could be sensed, both throughout Niagara and Canada as a whole, that the nation was rallied behind the Oilers. Even Prime Minister Stephen Harper, a self-proclaimed Flames fan, joined the bandwagon. At school, at work, at church, and on the softball bench, everyone was talking about the Oilers. It was an extraordinary moment.

Edmonton had overcome a lot of adversity in this final. Their star goalie was injured. A flu virus was going through the team. Things were tough. Somehow, they were persevering.

Game 7 took place on Monday, June 19. The atmosphere was amazing. The Canes grabbed an early 1-0 lead. The Oilers were not phased. Despite a ton of pressure, however, Edmonton was unable to level the score. Early in the 2nd, Aaron Ward lit the lamp and made it 2-0. The Oilers kept pressing and cut the deficit to 2-1. I cannot count the number of excellent chances they created to tie the game. Quality Carolina goaltending and defence weathered the storm. Late in the third: Edmonton net empty, Justin Williams wins puck possession and buries it. Just like that, the game was over… the playoffs were over.

I watched the Stanley Cup presentation with great disappointment. As I grew up, I developed tremendous respect for Rod Brind’Amour, Eric Staal and the many Carolina greats. At this moment, however, I was completely flat.

It was a good learning curve, for me and I believe also for many of my peers. Over the decade and a half since, there have been countless times in which to cheer for and play on teams that have not won a championship. But that’s not really the point… it’s the experience, the memories, and the people with whom you share the moment (teammates, parents, grandparents, childhood buddies, pets etc.). As kids grow into this understanding, they are able to appreciate the true richness of Canada’s national pastime.

So, I hope you and your family have been savouring the playoffs. The first two rounds were fantastic. As Canadians, we’re fortunate to have this annual opportunity to connect with family/friends, enjoy the elite talent and actively participate in Canadian heritage/history. This season, we’re seeing a Canadian team run deep under the leadership of the best hockey player in the world. Who knows… maybe this will be another spring to remember!