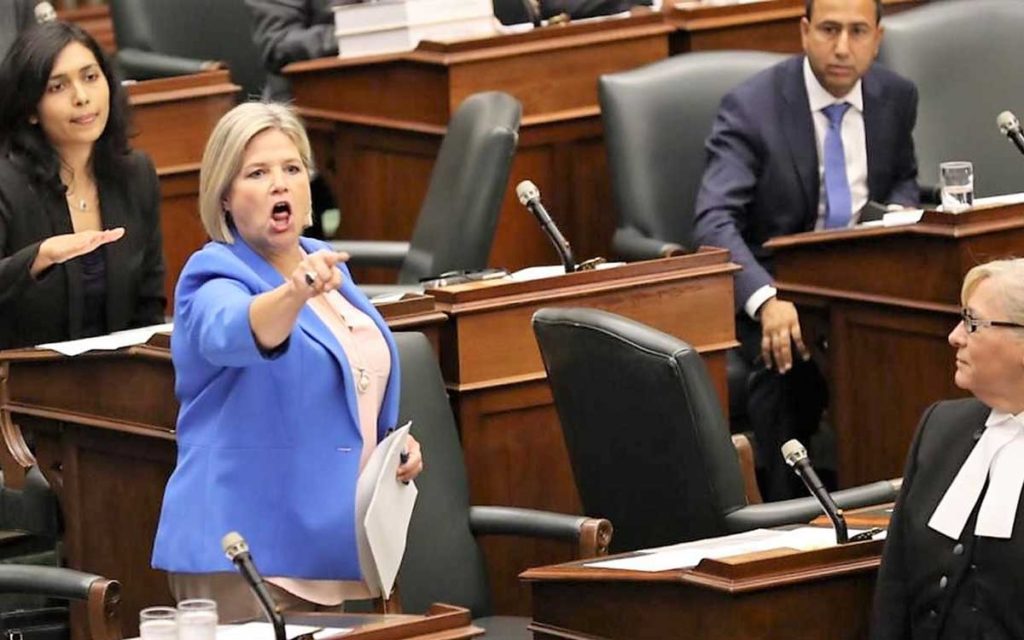 You’ve got to hand it to the left – it doesn’t take too much to get them riled up out of all proportion to the issue at hand.  In their latest attempts to rally opposition to the Ford government’s plan to reduce Toronto City Council to 25 members from 47 – and to employ the Notwithstanding Clause of the Charter to do so if necessary – Andrea Horwath’s NDP was so disruptive in the Ontario Legislature this week that they had to be ejected from the premises.  There were also a handful of protesters in the gallery that were compelled to leave as they would not stop their noisy protests so that the legislature could conduct business.  Although some members of the media tried to make it appear as it this was some kind of massive protest, actual photos of the legislature’s visitors’ gallery and the lawn of Queen’s Park showed that protesters were actually not that numerous.

In 15 years of Liberal rule in Ontario, there was no occasion on which the NDP became similarly exercised.  They didn’t seem particularly bothered when the Liberal government persistently undertook measures that ruined the hydro system in Ontario, thrusting considerable unnecessary expense upon average citizens, or when the Liberals rapidly ran up provincial debt to record levels, or when the Liberals enacted many other policies that damaged the Ontario economy and its taxpayers.  It is interesting that Horwath and her colleagues have chosen this issue on which to go completely over-the-top.  It is more likely that their reaction has everything to do with the fact that a Conservative government is proceeding with this initiative rather than a government of another political stripe, and little to do with the actual issue at hand.

The left in Canada and elsewhere has a long history of excessive and extreme reactions to conservative initiatives, and constantly work to not only disagree with such initiatives but attempt to completely delegitimize any views but their own.  A quote from William F. Buckley Jr. describes it well; “Liberals claim to want to give a hearing to other views, but then are shocked and offended to discover that there are other views”.  Although there are certainly strident voices in all parts of the political spectrum, conservatives typically do not go ballistic to anywhere near the same extent as liberals when they disagree with a government action.

This approach by the left has led to some ridiculous outcomes that we now see every day in regular discourse.  One example is that many people who do not have a liberal perspective on issues are regularly labeled as “far-right” or “alt-right”, when in truth they are merely moderately conservative.  These days, some logical questioning of something like illegal immigration and the mess at our border will get you quickly called a racist in an attempt to squelch discussion on an important issue.  Kathleen Wynne had a habit of calling anyone who criticized her a sexist.  All of this is meant to shut down worthwhile debate and label any non-liberal perspective as not only wrong-headed, but illegitimate,  and portray anyone who holds such views as somehow shameful.

It may be difficult to keep a sense of perspective when people are constantly screaming in your ear, but a review of history indicates that a conservative viewpoint on issues is much more supported by the facts than the many failed leftist experiments.  But that is exactly the point – if everyone is sufficiently distracted by the noisy protests, they will be more likely to overlook the actual evidence and buy into the leftist view of the world despite its many flaws and disastrous history.  The NDP would be better serving the people of Ontario – not to mention actually doing the job taxpayers are paying them to do –  if they would tone down the volume and discuss issues on their merits, whatever the political affiliation of the party in power.  Given their behaviour to date as Ontario’s Official Opposition, it’s unlikely anyone is holding their breath for this to happen anytime soon.