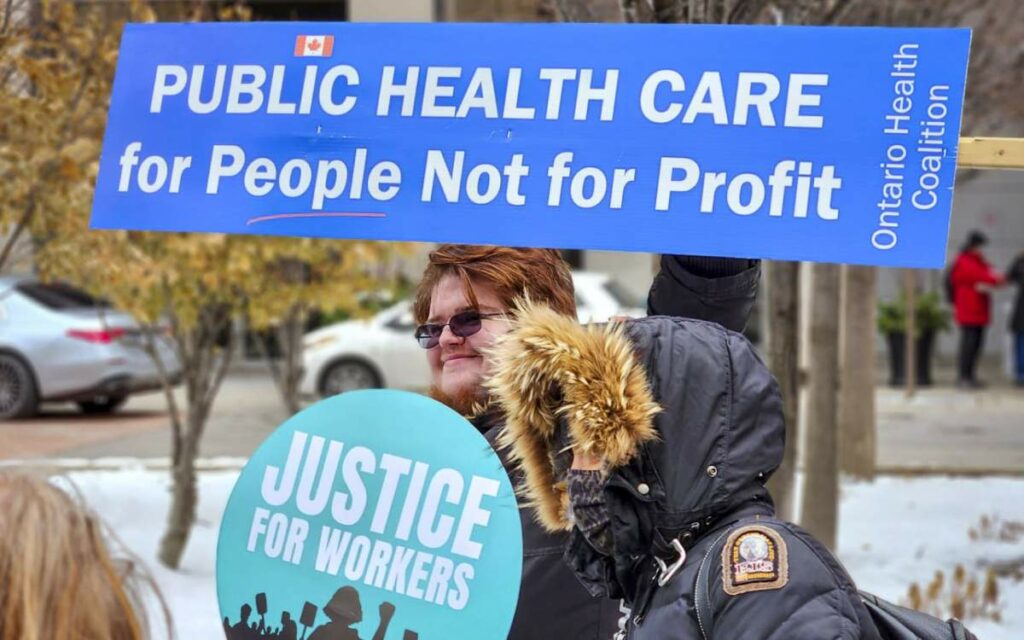 Characterizing private health clinics as “for-profit”, as if profit in any and every form is inherently a bad thing, is all part of the conditioning Canadians experience on a regular basis. Photo credit: Twitter/OFL

The Ontario Federation of Labour (OFL), a federation comprised of 54 labour unions in the province, released the results of a public opinion poll earlier this week on the issue of the state of health care. Not surprisingly, given recent headlines about all of the problems in the system, the survey found that 80 per cent of respondents believe that health care is in a state of crisis. The survey also noted that 55 per cent of respondents blamed the government of Doug Ford for the situation.

The union survey also delved into one of the left’s primary fears – the participation of more private clinics within our health care mix. The survey found 59 per cent of respondents oppose greater private sector participation. Unions always incorporate the phrase “for-profit” into their references to private clinics, as many Canadians have been conditioned over the years to believe profit is a bad thing. Yet without profits no company would stay in business to create jobs and pay the tax revenues to governments that enable the very existence of social services like health care. Unions also effectively make profits, which take the form of generous union revenues and excessive compensation for many unionized workers in the public and private sectors.

Our current public health care system is also famously inefficient. Unionization of a public or private workplace means that underperformers are protected while good employees are not adequately rewarded. A private clinic, focussing exclusively on doing a specific procedure such as knee or hip replacements, can easily be more efficient than the public system and make a profit while still costing the same or less than the equivalent procedure in the public system. The notion that a “for-profit” clinic will cost taxpayers more is simply not true.

The timing of this survey was not accidental, as the OFL had planned a protest at Queen’s Park for the same day, when they delivered a so-called “all we want for Christmas” card to the Premier’s office. As usual, the unions want more money from the rest of us, and for the provincial government to not appeal a recent court decision to overturn Bill 124, which was passed in 2019 and capped public sector wage increases at one per cent annually for a period of three years.

The finding that a majority of Ontarians believe the health care system is in crisis is fully expected, as it is surely true. However, the notion that this is unique to Ontario and that the current Ontario government is to blame is a stretch, to say the least. Sadly, Canadian health care is in crisis right across the country and governments of all political stripes at both provincial and federal levels clearly bear some responsibility. Any informed observer knows the problems have been brewing for decades, and made more acute and obvious because of the extreme demands of the pandemic, coupled with an aging population and an explosion of respiratory illnesses in recent months. Pinning blame on any one government is inaccurate and unhelpful as there’s lots of blame to go around.

Private clinics within a universal system, where no one is required to pay out of pocket, is a hallmark of the most successful systems in the world. Many countries with a universal system manage to provide better health outcomes while spending less per capita than Canada. If throwing more money at our system was the answer, we wouldn’t be facing the problems we do today as we’ve been doing that for years without positive results.

Some provinces such as Saskatchewan have been experimenting with adding more private clinics for some time, with great success. Other provinces including Ontario have started to move in the same direction, putting the fear into unions that they will lose their precious monopoly to gouge taxpayers while not producing service quality improvements for all the added expenditures.

Saskatchewan’s experience has been instructive. That province found that initially people were hesitant to go to a private clinic as they had been bombarded for years with messages about how private provision of health care was bad. Yet once they actually experienced it, realized the cost was still paid for by the public purse and service was often superior to the public system, they became very supportive. Other provinces will undoubtedly find the same, as people realize the warnings they have been hearing for decades have been lies that are intended to bolster the unions’ monopoly rather than improve health care for all Canadians.

Although Canada is already a comparatively big spender on health care, there are certainly ways the overall amount of money spent could be much better allocated. Most health care workers are well compensated, but there is a valid case for spending more in specific areas, with nurses and some other front-line workers being a prime example. Canada is also known to have much more administrative bureaucracy than other countries that have better systems and results.

In reality, the self-serving unions are a key part of the problem. Canada’s structure of a government-only monopoly on primary health care has been very beneficial to the unions while it deprives all Canadian users of health care of the high-quality service they deserve. Only two other countries in the world with universal systems have the same structure – Cuba and North Korea. These are not exactly examples we want to emulate.

The fact that most provinces are encouraging the participation of private clinics, within the universal health care system, is a positive development. It will help deal with the shortage of capacity in the public system and provide healthy competition for everyone to up their game. If this had happened decades ago, we would not be experiencing the health care meltdown we see today.