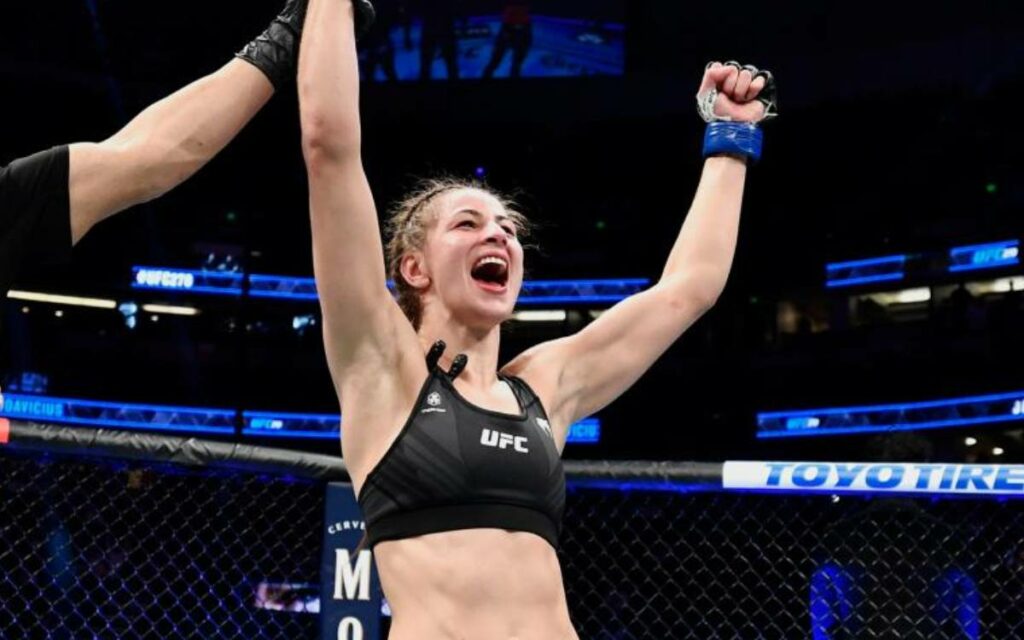 Her last name might not be easy to say, but Jasmine Jasudavicius continues to impress in the mixed martial arts (MMA) world.

After making her Ultimate Fighting Championship (UFC) debut, and winning via unanimous decision back in January, Jasudavicius (jazz-da-viss-ee-us is how it’s pronounced) returns to the UFC octagon this Saturday night in Austin, Texas.

Asked whether her newfound fame and attention of fighting in the premier MMA organization in the world has been daunting, Jasudavicius was candid with her answer.

Jasudavicius earned her way into the organization via UFC president Dana White’s Contender Series, which is known as the ‘world’s toughest job interview.’

She was quick to point out what the sport has taught her outside the realm of fighting.

“Holding yourself accountable. Working hard, especially when you’re tired. There’s a lot of days I don’t want to go to the gym, believe me it’s the last thing I want to do, but I tell myself this is what I chose to do. It’s tough some days.”

Up next for the Niagara Top Team member is fighter Natalia Silva.

“I don’t know too much about her, except she is Brazilian, and that she hasn’t fought in two years,” said Jasudavicius.

“So, I’m just preparing for any style that comes forward, and I feel like I’m back on the regional scene again where you don’t really know anything about your opponent.”

Jasudavicius enters the fight with a professional record of (7-1) and has won three straight fights, while the 25-year-old Silva is (12-5-1) and carries a six-fight win streak into the lone star state event.

Close to twenty members of the Niagara Top Team will be in Texas Saturday night, something Jasudavicius is very proud of.

“Most important in the world are my coaches and my training partners. I think we have the best gym in the world – Niagara Top Team – we’ve got a ton of talent coming out of that gym. It’s going to be awesome to be there with them.

I just want to thank them for all of the support and the hard work that we’ve put in this camp.

I think a nice Texas crowd will be on my side.”

For more information on the Ultimate Fighting Championship, and how to watch Jasmine fight Saturday night, visit ufc.com.