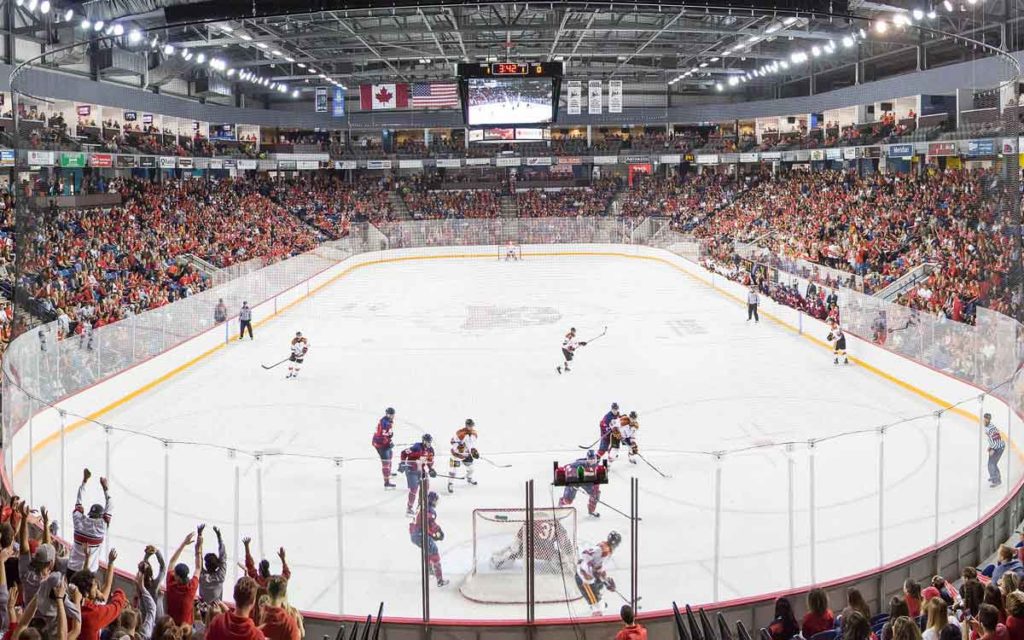 The Brock Badgers are set to take over the Meridian Centre again for one of the biggest shows in Canadian university hockey.

The Badgers men’s hockey team, which made it to the U SPORTS National Championships last season, will open the 2018-19 pre-season with their annual Steel Blade Classic to be held Friday, Sept. 21 in downtown St. Catharines.

This year marks the 20th anniversary of the tournament, a single-game, winner-take-all matchup between the Brock Badgers and Guelph Gryphons.

The annual Steel Blade game has become one of the most well-attended university hockey games in the country with nearly 5,000 fans packing the Meridian Centre in 2017.

“For our athletes, playing in the game in front of a massive crowd is a huge privilege, and something they’ll never forget,” said Neil Lumsden, Director, Brock Sports. “The rivalry with Guelph has reached an exciting level. I’d like to thank their coaches and players for making this a fabulous event.”

As has become the tradition, the Steel Blade game will kick off with the Homecoming Tailgate Party in the parking lot of the Marilyn I. Walker School of Fine and Performing Arts across from the Meridian Centre starting at 4 p.m. The family-friendly event is free and open to the public, and will feature music, a barbecue, beer tent, an interactive game from Warrior Hockey, face-painting and more. From there, the party will move inside the Meridian Centre for the 7 p.m. puck drop.

“We’re extremely proud that the Steel Blade Classic is now in its 20th year,” Lumsden said. “With the addition of the Homecoming Tailgate Party and the move to the Meridian Centre, Steel Blade is an event that Brock students love to attend.”

Returning for 2018 is the Family Zone, an end section in the Meridian Centre that will feature kid-friendly giveaways and visits from Brock mascot Boomer the Badger throughout the game.

Tickets for the Steel Blade hockey game are now available at gobadgers.ca

Prices are $15 for adults, $10 for students/seniors, and $8 for kids 12 and under. A limited number of $5 tickets for Brock students will be available starting Sept. 4 from the Walker Sports Complex Welcome Desk, Thistle Welcome Desk, Campus Store, Vendor Fair and International Open House. For each student ticket sold, $1 will be donated to the Brock University Students’ Union Food First program.