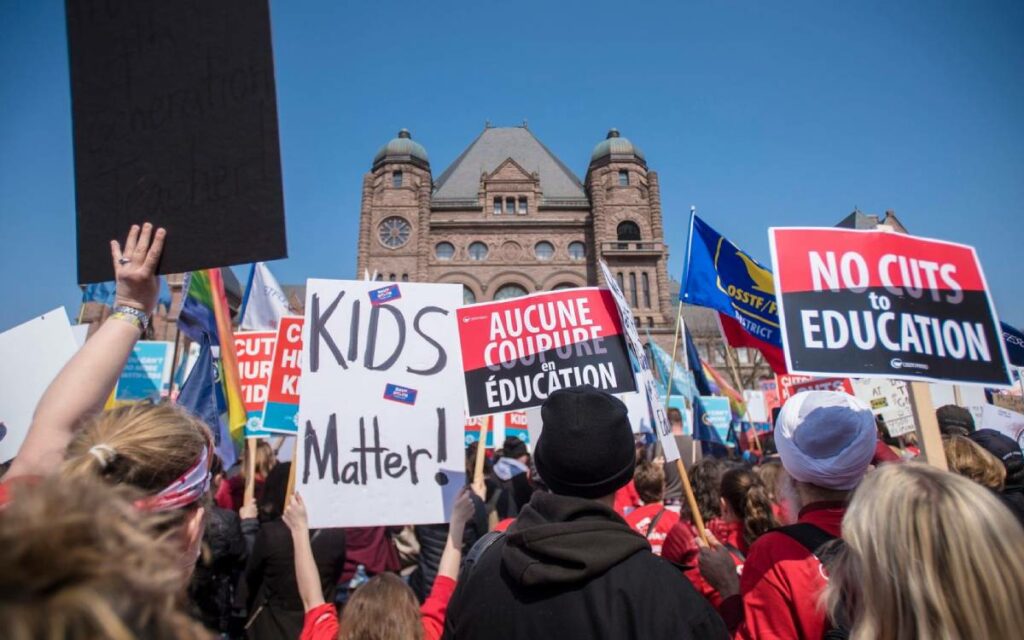 Teachers’ unions and their supporters protest the Ford government outside of Queen’s Park in Toronto, April 6, 2019. Photo credit: The Canadian Press/Tijana Martin

Have you tuned in to a Toronto Maple Leafs’ hockey game lately? Perhaps watched the news, or pretty much any other current affairs show on television of late? If so, you have likely noticed that there were almost constant ads sponsored by various teachers’ unions critical of Ontario Premier Doug Ford in one way or another.

As someone asked recently, why are these ads airing now, when the next Ontario election is more than a year away? The only possible answer is that the Ontario teachers’ unions are doing their best – with lots of their members’ money – to attempt to disparage conservatives ahead of a federal election widely expected to take place later this year, to support the federal Liberal Party.

Since about the mid-1990s, unions in general have taken a much more active partisan role in elections in Canada, with extensive advertising as one of the key ways they have weighed in. It is common in any Canadian election right now that the number one spender on advertising – by a long shot – has been unions, and particularly public sector unions.

The information included in the ads is questionable as well, if not downright misleading. The ads constantly harp on the supposed “cuts” to education the Ford government has made, when in fact spending on education has not been reduced at all, but continues to increase, as anyone who can read a budget can clearly see. Unfortunately, though, more spending does not equate to better quality education, as was apparent during the McGuinty/Wynne Liberal government tenure in Ontario, when education spending doubled yet more students were not meeting math and literacy standards.  Increased “education” spending did lead to more dues for teachers’ unions though, which is what the constant cry for more spending by unions is really all about.

These ads are running in prime-time spots, which means they undoubtedly cost many millions of dollars.  Union members will likely never know exactly how much of their dues are going to such partisan purposes, as there are no financial transparency requirements of unions in Canada as there are in other countries. Prime Minister Harper established financial transparency legislation for unions during his tenure, against the vociferous objection of unions.

The massive opposition to transparency by the unions begs the question: exactly what do they have to hide? Seemingly quite a lot. Following his election, Justin Trudeau quickly removed the need for union transparency to reward his union friends for helping him get elected, to the detriment of union members and Canadians in general.

As Canada also permits unions to levy mandatory dues in a unionized workplace, union members have no choice but to support such partisanship, even if they do not support the party the union favours, as undoubtedly many do. Most public entities that enjoy tax and other advantages in Canada are required to be transparent with how they spend their money, and it is outrageous that this is not required of unions. This is especially the case with public sector unions, who exist courtesy of the tax dollars Canadians are forced by law to pay.

The Ford government recently passed legislation limiting the extent to which third parties (i.e. unions, business groups, non-profits, etc.) can spend on election advertising. Bill 254 limits how much a third party can spend on advertising to $50,000 per month in the year prior to an election.

Currently, third parties can spend an unlimited amount on advertising until shortly before an election when more restrictive rules are applied. Prior to the 2018 Ontario election, over $5 million was spent by third parties – and primarily by unions – in the six months leading up to the election. On the passage of Bill 254, Ontario Attorney General Doug Downey commented, “We strongly believe that Ontario voters should determine the outcome of elections, not big corporations or unions, American-style political action groups or other outside influences.” It is likely most Ontarians would agree with that sentiment. Naturally, the teachers’ unions opposed this bill and have filed a Charter challenge against it.

Of all the unionized workers in Canada, the majority – about 60 per cent – work in the public sector even though government employees comprise about 20 per cent of total employment, as private sector unions have failed to adapt to more competitive market realities despite all the legislated advantages they enjoy. Public sector unions are greatly overrepresented in the union movement as a result, and as there is no competition to government and “customers” (taxpayers) must by law pay taxes, there is no need for government unions to worry about providing quality service.

Unions will always favour bigger government and more public spending, and as such their promotion of leftist political parties works to the detriment of the vast majority of voters who are private sector taxpayers footing the bill for ever-larger government. Most Ontarians viewing the current crop of union ads should recognize them for what they are – inaccurate, partisan opinions that are not in the best interests of most voters – and keep this firmly in mind when election day rolls around.

Besides, watching the Leafs play these days is a lot more fun than tedious, negative union ads.