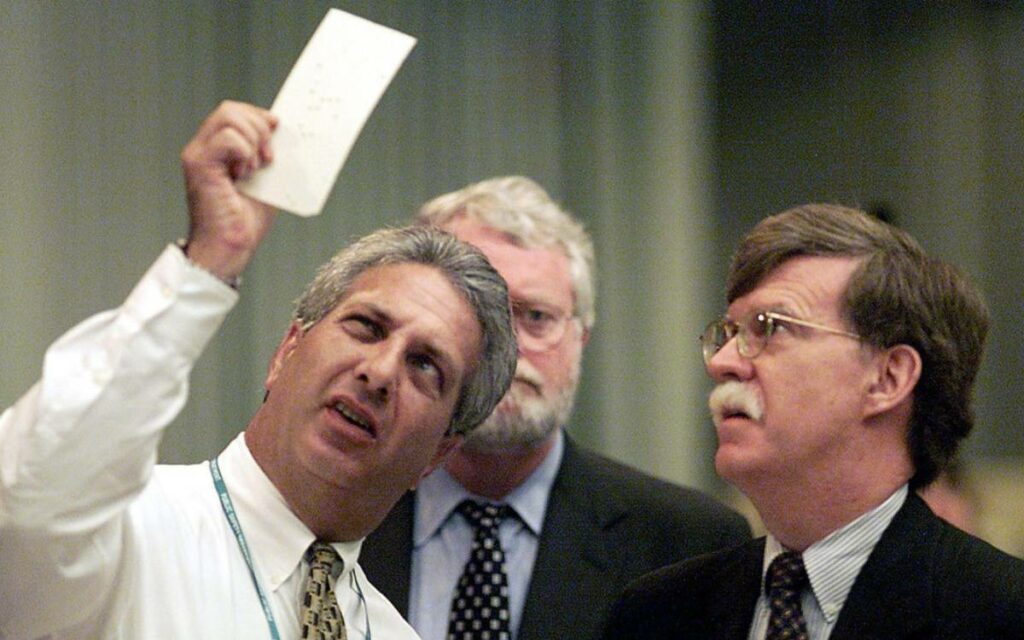 Casting doubt on the American electoral system in an attempt to overturn or invalidate an unfavourable election result hardly began with the political defeat of Donald Trump in 2020. The Democrats have effectively spent the entire 21st century doubting Republican victories and leveling spurious accusations against their political opponents, starting in earnest with the 2000 presidential election results in Florida and the infamous ‘hanging chads’ (pictured). Photo credit: Greg Lovett/AFP

Since the early morning hours of Nov. 4, 2020 Americans and those interested have been told that President Donald Trump concocted a lie, with the help of a few underlings, which tried to reverse the tabulated results of the 2020 presidential election. While truthful analysis bears out many problems with Trump’s assertions, there is something to be said here about Democratic Party shenanigans and elections.

At this point in the US off-year election cycle, the Democratic Party, fearful of being reduced back to minority status in the House and Senate, has cobbled together a strategy they hope will retain some of their power base. The thinking goes like this: If we Democrats don’t rig elections and ensure our side wins, the Republicans may win, which would be the end of American democracy. In other words, Democrats and much of the mainstream media now believe that to preserve American democracy, they must do everything in their power, including cheating, to prevent the Republicans from winning.

When your hubris has reached this level even the word entitlement seems understated. This is full-blown power privilege, an elitist illness as old as the earliest forms of government and endemic as corruption within the body politic.

How did we get here?

The State of Florida was initially called for Democratic nominee Al Gore and appeared to place the incumbent vice-president in the cat’s bird seat for victory. Soon, however, the votes started coming in from Republican parts of the state and the networks reversed themselves, giving the state to Bush and pushing him across the finish line. In an unforgettable twist, the networks, late in the evening, just as Gore was about to concede, reversed themselves again and said the state was too close to call.

This all precipitated a five-week wrangling over voters’ intentions, ballot chads, and court rulings. In the end, Gore wanted to be allowed to keep recounting three of the sixty-four counties in Florida until he got the result he desired. Using the equal protection clause of the constitution, the United States Supreme Court overruled the Florida Supreme Court to stop the counting, resulting in Bush’s victory. From that point on Democrats claimed the Bush presidency was illegitimate, Gore had really won, Bush, in Hillary Clinton’s words, was not “elected, so much as selected.”

The shameless subverting of Bush’s victory again reared its ugly head in the 2004 election when Bush won Ohio by 20,000 votes to secure enough electoral votes. This time Democrats claimed that polls were closed early, voter suppression tactics were used, and thousands of Democratic voters were prevented from delivering a John Kerry victory in Ohio, and in effect, the presidency. For eight years the Democrats undermined the Bush presidency on these specious arguments, casting doubt on the American electoral system, and repetitively insisting that elections were not fair, were rigged, and favoured one side. But there is more.

In 2012, after claiming a post-racial American victory in 2008, President Barack Obama decided on a strategy of polarizing racial politics. Mitt Romney, former governor of liberal Massachusetts, and perhaps the most centrist Republican candidate to run as the nominee since Dwight Eisenhower, became the target of the Obama campaign.

In August 2012 at a campaign event in Danville, Virginia, then-VP Biden claimed that Romney and the GOP wanted to place African-American voters “back in chains” with their regulatory and economic policies, highlighting racial language referring back to slavery. This, along with CNN’s Candy Crowley intervening on behalf of President Obama during one of the nationally televised debates, is cited as the catalyst for turning many previously moderate Republican voters into MAGA supporters. The thesis asserts that if a nice guy like Romney can be caricatured as a racist, then obviously some heavy rhetorical ammunition would be needed to defeat a party willing to go this low.

Four years later, Donald Trump and his wrecking crew assumed the presidency and set the stage for what Democrats now claim to be the greatest threat to democracy in the country’s history.

Perhaps they need to be reminded of their own 2016 nominee’s response when asked about the election results. Beginning shortly after her loss to Donald Trump, Mrs. Clinton began to publicly question the legitimacy of the 2016 vote, consistently sticking to this story right into a 2019 interview with CBS News and then just prior to the 2020 election, appearing on The Atlantic’s podcast The Ticket, the former nominee said: “There was a widespread understanding that this election [in 2016] was not on the level…We still don’t know what really happened.” In a stunning admission, less than a month before the Biden-Trump election, here is a former First Lady, Secretary of State, and presidential nominee throwing doubt on America’s elections.

If Donald Trump needed any fuel to fire up his election fraud imaginations, nothing crystallizes the motive like a word from Hillary Clinton, an entitled creature of the American Left who to this day believes she should have been president if not for some vast right-wing conspiracy that first tripped up her husband and then 25 years later came to collect its final payment, blocking her from her rightful post as President of the United States.

Meanwhile, in Georgia in 2018, Democratic gubernatorial nominee Stacey Abrams, who lost to Governor Brian Kemp by 50,000 votes, claimed victory. In 2020 at the Democratic National Convention, she sat on a panel of elected Democratic governors and was recognized as an elected governor in complete denial of Kemp’s election having been certified and having held the office for over a year and a half.

All of this and more provides the backdrop for what the mainstream media relentlessly call the “big lie” when Trump falsely claims election fraud stole his victory in 2020. Undoubtedly Trump is wrong and his Jan. 6, 2021 antics have yet to be fully owned. Nonetheless, when Chuck Todd on Meet the Press, George Stephanopoulos on This Week, or Margaret Brennan on Face the Nation, week after week bitterly claim Donald Trump, and by association, all Republicans, are a threat to democracy, perhaps a reminder of how this all started may shed some light on reality and calibrate the issue back to the fact that democracy always has to be protected and no one party is above reproach and no one party at total fault. A modest reassessment of the coverage is due, but I for one will not be holding my breath.