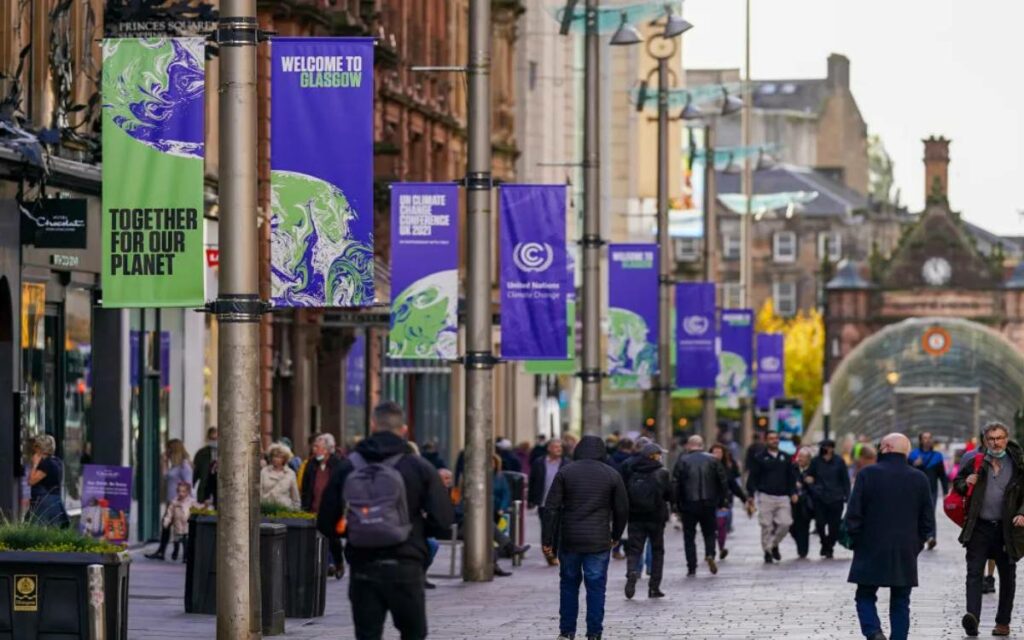 Banners advertising the upcoming COP26 Climate Change Conference line the streets of Glasgow. Trudeau and his Canadian delegation are currently on route to participate in the summit and tout Canada’s many alleged environment achievements. But should the world really be celebrating Canada’s environmental record under Trudeau? Photo credit: Time Magazine

For the next two weeks Canadians can anticipate foreboding forecasts on the world’s dire environmental condition. Thousands of world leaders and environmentalists are jetting their way to Glasgow, U.K. to take part in a two-week United Nations Convention on Climate Change. The understood objective of the COP26 Climate Summit is to get participating countries to commit to an immediate plan of action to save the planet.

Canadian state-subsidized mainstream media will be reporting on every statement and promise made by the country’s Glasgow delegation. Expect to hear opinions from every corner of Canada’s environment industry: from the David Suzuki Foundation to Simon Fraser University, to a bevy of organizations funded by the Open Society Foundation Canada.

The Trudeau government will be leading a discussion – both in Glasgow and at home – on the necessity to reduce greenhouse gas emissions. Canada is committed to reach net-zero emissions by 2050. So, there will be a great amount of analysis on how Canadians can ensure the country’s emissions will be significantly reduced. In essence, the government’s dialogue is focused on validating a mathematical formula that will demonstrate we have done our part.

Our Canadian delegation’s proclamations at COP26 Climate Summit aside, the CO2 mathematical equation in no way reflects the ‘green’ record of the Trudeau government. Let’s consider four dirty secrets of Canada’s green agenda.

Quebec municipalities routinely flush their sewage into the St. Lawrence River. The very first act of the newly elected Trudeau government in 2015 was to sign off on a permit for Montreal to dump its sewage into the seaway. With this government, there has been 900 billion litres of raw sewage poured into Canada’s waterways. CTV News reports that this disgusting figure is equivalent to filling an Olympic-sized swimming pool more than 355,000 times.

It is especially disturbing what is happening in La Belle Province. Foundation Rivers, an environmental watchdog group, recently reported data on the amount of sewage being discharged daily in Quebec – more than 60,000 “spills” in 2019 and 52,000 in 2020 (a rate in excess of one thousand a week). CBC reported earlier this month that the St. Lawrence River is polluted with high concentrations of E. coli. Apparently, the City of Montreal has caused E. coli plumes that drift as far downriver as Trois-Rivieres.

On the same wavelength, this past summer, the Trudeau government secretly granted municipalities a twenty-year waiver to continue dumping raw sewage into fish habitat. Canadian municipalities now have until 2040 to comply with stringent wastewater standards set in 2012 by the Harper government. Remarkably, Trudeau had already exempted cities and towns in Quebec from these national water quality standards.

Canada is exporting increasing amounts of coal to China and India

Figures released this month show Canadian coking coal exports to China and India are on the rise. The Vancouver port is receiving increased amounts of coal from the United States and shipping increasing amounts to China. Meanwhile, coal exports to India have tripled in the first half of 2021.

It is perhaps our country’s dirtiest of dirty secrets – B.C.’s Roberts Bank Super-Port and Westport Terminals. This is the largest, busiest port in North America, shipping millions of tonnes of coal each year, which in turn produces millions of tonnes of CO2 annually. In fact, the Sierra Club has factored an emissions formula that reveals the annual coal exports from Vancouver produce 99.8 million tonnes of CO2 over their lifetime.

So, while the federal government bears down on Canadians to change their travel and heating habits in order to reduce CO2 emissions, it turns a blind eye to the coal trade with China and India – two countries that have publicly stated they will not sign on to emission targets set at the COP26 Climate Summit.

Two years and millions spent – and not one tree planted

As part of its green agenda, the Trudeau government announced a tree planting program as part of the lead up to their re-election campaign bid in 2019. The promise was to spend $3.6 billion to plant two billion saplings across Canada in ten years. The program was announced in summer 2019; Trudeau campaigned on it in 2019; it was in the 2019 Throne Speech and the 2020 Budget; and, the promise was remade in the 2021 election campaign. The sad reality of this promising program is that not one tree has yet to be planted.

However, there is a budding hope that the federal government will eventually turn ground on this initiative. The government is sketching out a new plan that would pay private landowners and other agencies to plant the trees. As witnessed earlier this month, Liberal MPs will be pressed into action to hand out cheques in their constituencies (Brampton was just presented $1.3 million to implement a local tree planting program next summer). This new twist to Trudeau’s promise is estimated by the Parliamentary Budget Office to increase the cost of the program to $6 billion.

Whatever the taxpayers’ price tag, this green item amounts to nothing more than tokenism when factored against data that shows Canada currently has 318 billion trees and forestry companies are planting 600 million trees annually.

Canada’s CO2 emissions are rising (but do as we say, not as we do)

All green rhetoric aside, Statistics Canada data reveal that under the Trudeau government CO2 emissions have risen. In 2019 (the latest figures available) emissions were 730 million tonnes – up from 723 million tonnes in the last year of the Harper government. Under this government’s environmental stewardship, Canada missed its Copenhagen 2020 targets and, today, the U.N. estimates Canada will miss its next emissions target in 2030 by 15 per cent.

Still, the Trudeau government is insistent that Canadians must do more. Catherine McKenna, who has been the green face of Trudeau’s climate crusade for the last six years, logged a remarkable 22,600 kilometres by air in just 10 days this summer to fight climate change across our land. Blacklock’s Reporter exposed McKenna’s high-flying, swansong tour where she chastised Canadians on “the need to reduce air pollution.”

As incredulous as this is, Canadian hypocrisy pales in comparison to what we are about to witness with the COP26 Climate Summit. In preparing to welcome the hundreds of world leaders and thousands of climate change experts, U.K. media reports that there are two airports in England designated to cater exclusively to private jets. It is currently unknown how many in the Canadian delegation will make use of this courtesy service.