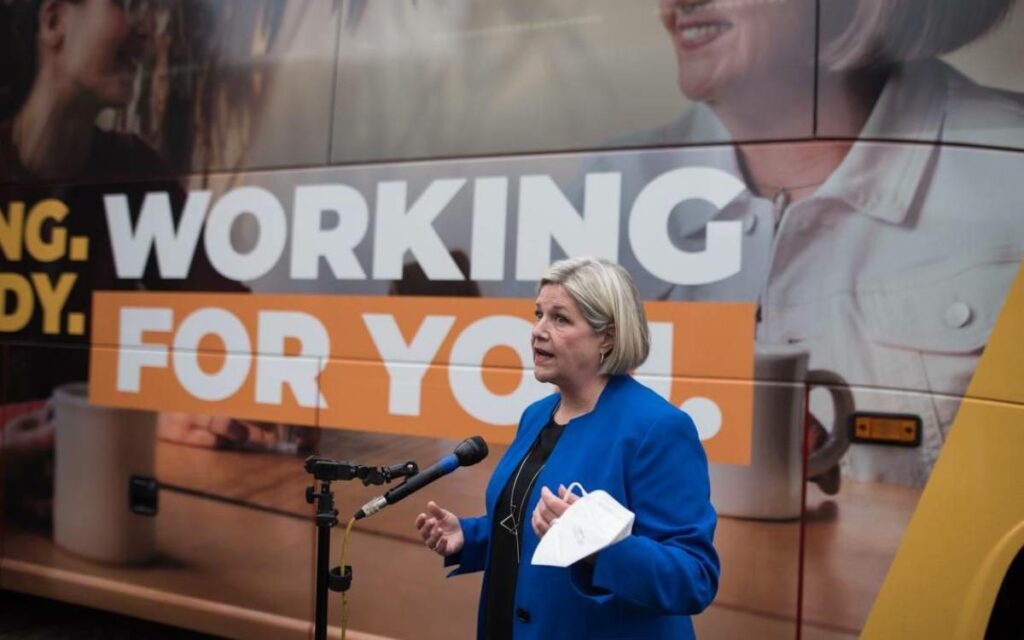 Both the provincial Liberal leader Steven Del Duca and NDP leader Andrea Horwath (pictured) have committed to exploring the idea of shortened work week. While it’s a debate well-worth having, any government would be wise to engage with caution and avoid any kind of top-down imposition. Photo credit: The Canadian Press/Tijana Martin

The concept of a four-day work week has surfaced yet again in the context of the Ontario provincial election. Both the Liberal and the NDP have included the concept in their platforms. The Liberals have promised to conduct a trial “demonstration” to show the value of a four-day work week. They have promised to consult with labour groups and businesses in the process. Liberal leader Steven Del Duca said the pandemic has reinvigorated discussion around work-life balance. There is no question that the work-life balance issue was paramount under the exceptional circumstances of the pandemic, but now that life is hopefully returning to something close to normal, this is an odd time to be changing something as fundamental as the work week using the pandemic as an excuse.

As well, Del Duca stated that workers found themselves to be falling further and further behind even though they were working hard. Although this may well be true, the reason people feel this way has nothing to do with the length of the work week. Instead, it is because of things like runaway inflation which Liberal government policies have worsened, and things like excessively high hydro rates which were a main policy thrust of the previous Ontario Liberal government that Del Duca was a part of. To claim that a four-day work week is somehow the solution to problems Liberals themselves have created is a pretty dubious proposition.

For their part, the NDP have said that they will establish a four-day work week commission that the party initially proposed in 2021 to oversee a year-long pilot project. NDP leader Andrea Horwath noted that she wanted to ensure that a shorter work week would not impact negatively on people’s income, considering current inflation pressures. As with the Liberals, it is pretty hypocritical that both parties express their inflation concerns while still supporting the carbon taxes and other so-called green policies that are a main driver of the sky-high inflation that is plaguing middle class families currently.

The history of experiments with a four-day work week is mixed at best. The principle usually involved is that employees would work the same number of hours as in a traditional five-day work week, but that work would be compressed into four days with the employee enjoying a three-day weekend. Advocates for the four-day work week claim that not only does it increase employee satisfaction, but also economic productivity. In practise however, the conclusion is that there are very different reactions to the concept from both employers and employees.

Some jobs are physically demanding such that an eight-hour shift is manageable but adding more hours would be punitive. As well, some employees enjoy being able to get home after an eight-hour work day to deal with family issues rather than working a longer shift and getting home later. Employers often have difficulty scheduling hours for employees trying to work around a four-day week, and co-ordinating those schedules with suppliers and customers that operate on different schedules. Although the notion of a four-day work week and long weekends all year round may initially be seductive, the details suggest they are more difficult to implement than they appear.

The pandemic has demonstrated that some changes in work practices can successfully be accommodated. As they emerge from the pandemic, many companies are experimenting with a hybrid model where employees stay at home a day or two during the week and are physically present in the workplace otherwise. Of course, this works better for some companies and some industries than it does for others. Many companies in Ontario are closely integrated with businesses in the US and other jurisdictions and have to co-ordinate their operations accordingly.

Businesses in many industries, such as the retail sector for example, need to be open seven days a week.  A small retailer with only three or four employees would have a difficult time accommodating a four-day work week and still remain successfully in business. Small businesses in general – and they represent about half of our economy – would have a much more difficult time implementing a four-day work week than would a large corporation with thousands of employees.

The four-day work week is a worthwhile concept to investigate. But looking at its history in places it has been tried, and the severe difficulties some business would have in implementing it, suggests that no government should ever attempt to impose it on workplaces. What would be preferable is for governments to provide incentives for businesses to experiment with different working arrangements and leave it up to the businesses and workers themselves to determine what works best for them.  What must also be avoided is for government workplaces, which already work fewer hours, with public employees taking more sick days and retiring earlier than everyone in the private sector, to implement four-day work weeks which would burden taxpayers and diminish the quality of public services even more than they are now.

The four-day work week is well worth investigating, but with carrots, not sticks.