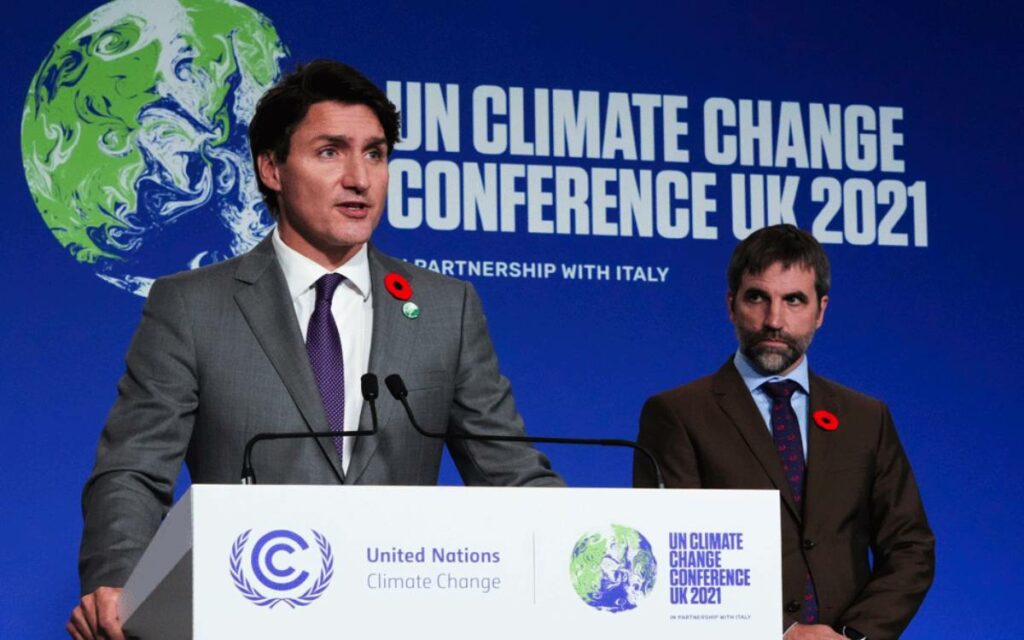 Prime Minister Justin Trudeau used his two minutes on the world stage at the United Nations Climate Change Summit (COP26) to urge other countries to follow Canada’s example and impose an escalating carbon tax on their citizens and businesses. Trudeau called for other countries to join together and introduce a series of carbon taxes that would cover 60 percent of global carbon emissions by 2030. His solicitation went unanswered.

Yet, PM Trudeau made a rash of pledges on behalf of Canadians. Canada is the only oil-producing country to announce that it is imposing a hard cap on emissions at today’s levels for the oil and gas sector. It is also phasing out all coal-fired electricity and will halt Canadian exports of thermal coal by 2030. The Canadian government will withdraw billions of dollars of its financial support for Canadian companies and pension plans that are invested in oil, coal, and natural gas projects internationally. Trudeau also gave away tens of millions of additional dollars to the treasure trove that Canadians have already pledged to U.N. climate change programs.

Trudeau also took every opportunity to highlight his government’s intent to increase the federal carbon taxes through the decade in order to meet Canada’s CO2 emission targets in 2030. In a 2020 government document on the country’s environmental agenda, the Canadian carbon tax is explained: “The principle is straightforward: a carbon price establishes how much businesses and households need to pay for their pollution. The higher the price, the greater the incentive to pollute less, conserve energy and invest in low-carbon solutions.”

Bottom line: the carbon taxes are meant to adversely impact Canadians. These are punitive measures to alter our behaviour and energy habits.

So, Canadians are to pay dearly. Dan McTeague, president of Canadians for Affordable Energy, predicts that Canadians will soon be paying $2.00 per litre at the pumps and suggests some Canadians will need to manage heat-or-eat scenarios through the cold winter months.

Every April through this decade there is a schedule of tax hikes that will increase pump prices annually by approximately a dime, and home fuel prices by $20 per month. The current price on carbon is $40 per tonne and this is set to rise to $170 per tonne by 2030. So, carbon taxes paid at the pump on each fill-up by 2030 will account for an additional $27 for a minivan, an additional $45 extra for a pickup truck, and truck drivers will pay an additional $204 to fuel their transport trucks. Consider what this means for commuters each week.

This tax will hit farmers and truckers hard and Canadians will experience hidden tax increases with groceries and merchandise bills. It will be difficult to factor and track these tax increases as they will be unseen, folded into the cost of goods.

Canadians will also experience increased taxes on their home heating, natural gas and propane bills. The Canadian Taxpayers Federation (CTF) factors that a home using 2,700 cubic metres of natural gas per year would be dinged an extra $240 in taxes annually as the carbon tax is hiked.

Apparently, it makes no difference that these carbon taxes are a greater burden for lower-income Canadians. A Finance Canada analysis on the carbon tax recently concluded that “increases in transportation fuel and home heating expenses would disproportionately impact lower and middle-income households [and] those living in single detached households or those without control over the energy efficiency of their dwellings that use heating oil.”

Remarkably five weeks from now, on Jan. 1, the Trudeau government is introducing a new Clean Fuel Standard (CFS) carbon tax on the country’s business community. By the government’s own estimates, the new CFS tax will increase energy costs by an additional $208 annually for households by 2030. There is no CFS rebate system planned to defray these increased taxes.

AND THERE IS MORE… the GST is collected on top of all of the various carbon taxes. The federal government is taxing its carbon taxes – and pocketing it. In 2019, the CTF estimates Ontarians paid $243 million in GST on top of carbon tax charges.

In a recent Globe and Mail column, Andrew Coyne questioned the premise that escalating carbon taxes will ensure Canada meets its 2030 emissions targets. In reviewing government estimates, he calculates that the changes brought about through “carbon pricing” will only result in about one-third of the reductions the country needs to get to by 2030. Coyne points to the fact that the federal government will need to introduce other subsidies and industry regulations to meet its goals.

By logical extension, the massive investments promised in the Liberal green agenda to transition our resource-based economy away from fossil fuels will require new sources of revenue. This past year Finance Minister Chrystia Freeland and Finance Canada had floated a series of trial balloons: a wealth tax on high income earners, increase the capital gains rate, a new capital gains tax on the sale of primary residences, and an inheritance tax.

It is not surprising that Chrystia Freeland, who sits on the Board of the World Economic Forum (WEF), and globalist Michael Sabia, who has been parachuted in as the finance department’s Deputy Minister, are taking pages from the WEF playbook to produce the federal government’s plan for financing its green agenda. Canadians can expect to see new economic policies introduced “to fight climate change” that are detailed in WEF documents and presentations:

In this way, “paying for pollution” is a Trojan Horse for an onslaught of new taxation.

It remains to be explained what will replace the wealth generated by Canada’s energy and natural resources sectors. Deputy governor of the Bank of Canada Toni Gravelle recently predicted that whole sectors of Canada’s economy will “shrink significantly,” that there will be “sharp declines” and untold job losses with the climate change programs. The billion-dollar question is, “How will we pay for the losses in jobs, businesses and investment, in transitioning away from the economic sectors that have served to underpin Canada’s prosperity through the ages?”

Freeland was recently before a Canadian Chamber of Commerce audience where she made this comment, “None of us can understate the magnitude of the transition that the global economy is beginning now when it comes to moving from using fossil fuel energy to renewable energy. I think that is a shift comparable only to the Industrial Revolution itself. It is going to take so much hard work from all of us.” 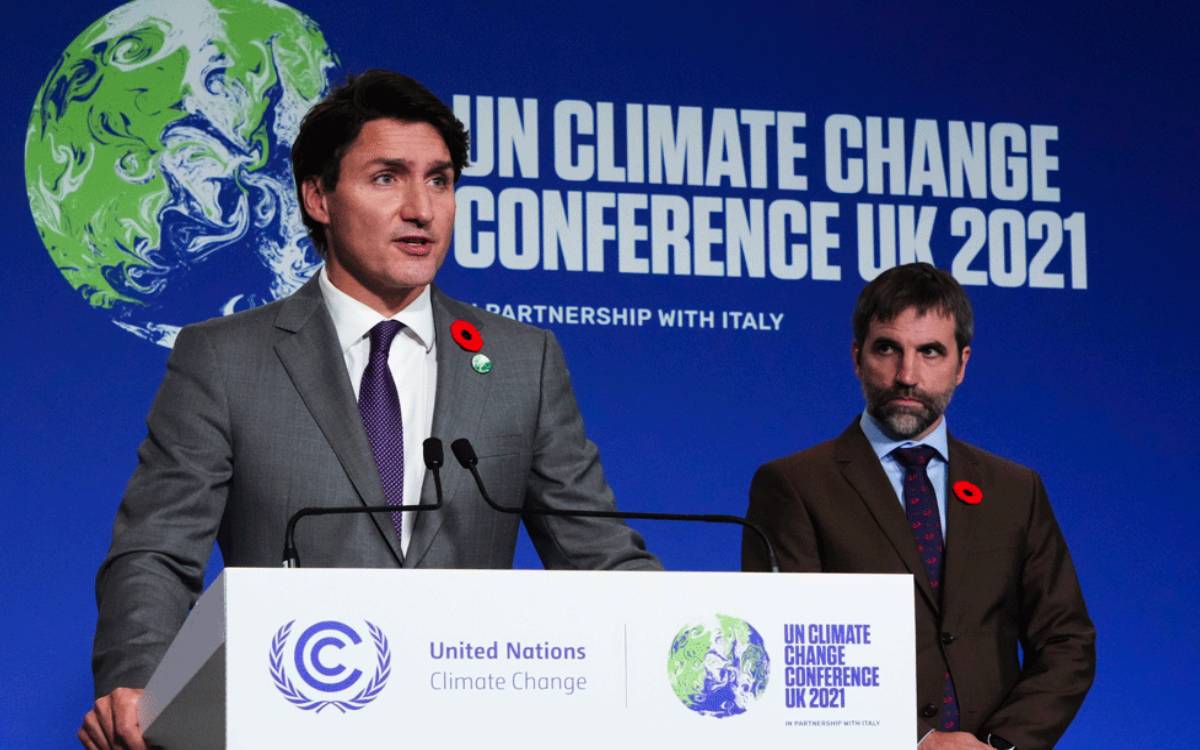