The NDP wants to make Ontario a “Sanctuary Province” 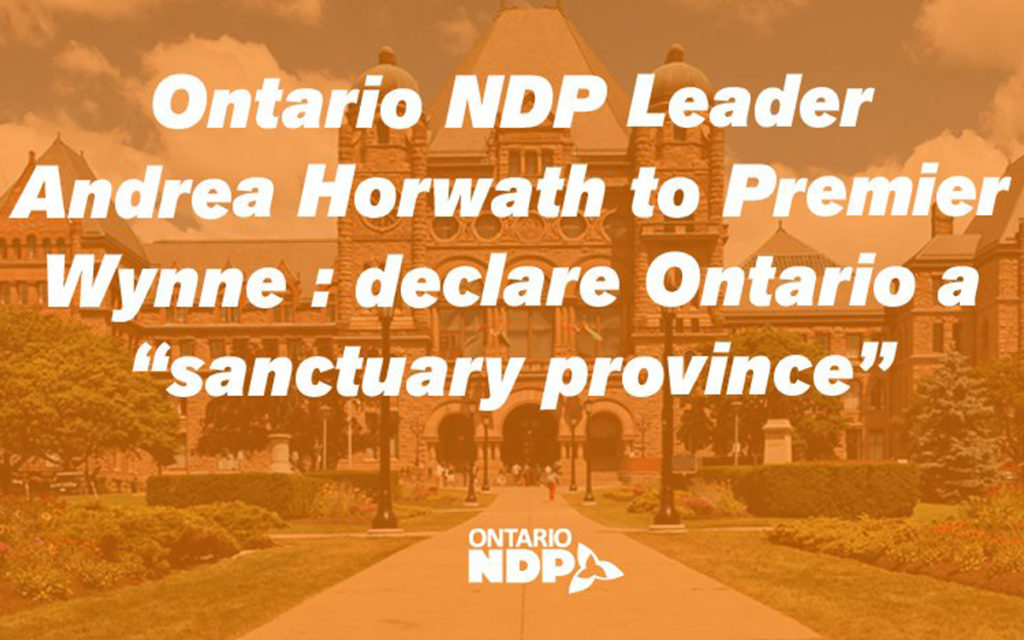 The NDP has been a protest group on social, economic and political issues, for most of its years and electing the NDP will be very dangerous for Ontario. With many solidly socialist policies they have proclaimed that Ontario should be a Sanctuary Province. Essentially, this means that illegal immigrants will be flowing uncontrolled into the province and will be allowed to stay outside of the existing immigration laws.

The huge costs of implementing a sanctuary policy have been brought to light with the actions taken by the City of Toronto to deal with the influx of immigrants. Longer term problems will continue to flow from creating an unrestricted and unsupervised flow of illegal immigrants.

The NDP are sending a message to the organizations they are hoping will rally to elect them in the upcoming election.

The Sanctuary Province stance is part of the DNA makeup of the NDP party. It’s who they are and what they stand for. A protest group, with now a real chance at winning this election, they truly believe that socialism is the way to a better future for Ontario and Canada. A significant majority of candidates running for the party are union organizers. Unions are the main supporters of the NDP and word is a number of unions have given the NDP private union membership lists to use for the campaign in the election.

As part of the philosophical belief many NDP candidates believe in their major platform, the Leap Manifesto, which essentially states that the current system needs to be destroyed to make way for their utopian socialist future.

The danger for Ontario is that the NDP will be elected as protest vote to the Liberals who are at the end of a long reign of economic and social destruction that has left the province weak and wobbly.

Sanctuary Province is an issue that is global in nature and a signal to progressive voters that one candidate or party is onside with the socialist cause. NDP have taken up the issue as a way to signal to those voters the virtues of voting NDP.

Sanctuary Province has been imported from the America vernacular where immigration is a hot button issue, and has since become one in Canada too, as Team Trudeau in Ottawa refuse to enforce laws around illegal immigrants.

Many Canadians are seeing how open doors policies to immigrants have created havoc with countries around the world. In a recent Angus Reid poll, half of Canadians disagree with Trudeau government actions on illegal immigration and 40 per cent fear that it makes Canada a less safe country.

Ontario is the magnet for immigration and Ontarians are the ones having to deal with the costs and the issues arising from it. It creates a range of challenges including crowded schools, increasing healthcare costs for people who have never paid into our fragile system and job market pressures where immigrants challenge Canadians for jobs in a market that is doing very poorly.

The Mayor of Toronto just this week called the refuge situation in Ontario a crisis and declared an emergency bringing in the Toronto’s Office of Emergency Management to deal with the adverse effects. This was the result of Toronto becoming a Sanctuary city about a year ago.The city is becoming overwhelmed by the number of illegal immigrants and the chaos and challenges associated with trying to provide them all with free housing, food and healthcare.

These are dangerous times in politics for Ontario. The progressive socialists, supported by billion dollar union dues funds, millions in foreign money and thousands of highly motivated activists see the current election as a battle.

The outcome will be disastrous if the NDP get elected. Voters have seen it recently in BC and Alberta. Let’s hope this nightmare does not arrive in Ontario.

The NDP wants to make Ontario a “Sanctuary Province”