The problem with subsidies 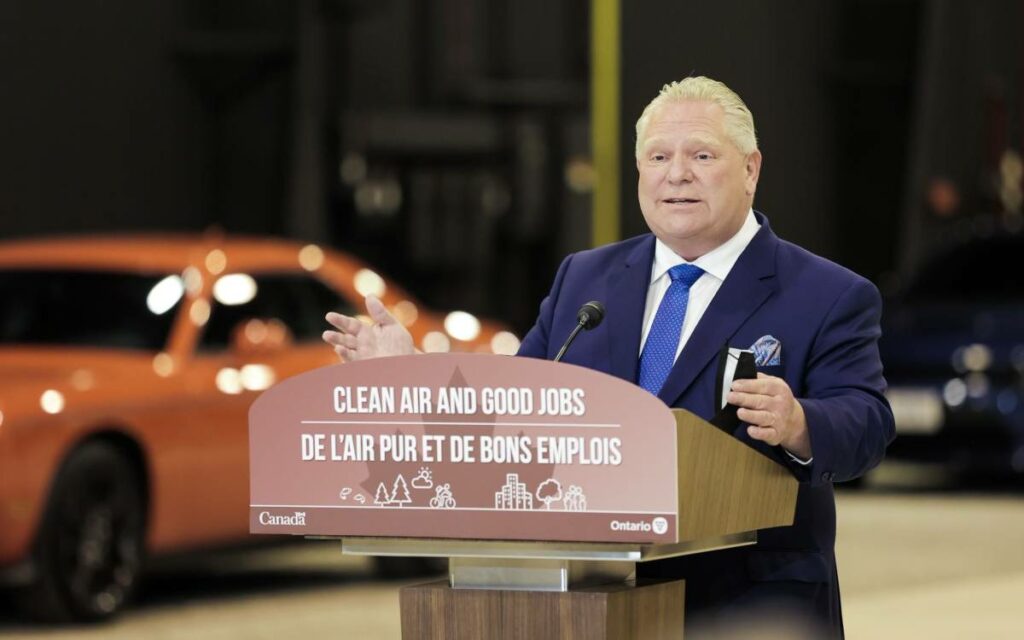 While spending large sums of someone else’s money may be attractive and politically expedient for those in power, more often than not taxpayers end up with a bad deal. Pictured Doug Ford announces a massive public investment in automaker Stellantis in Windsor, May 2, 2022. Photo credit: Twitter/Doug Ford

In recent months we have seen a number of announcements regarding various large industrial projects to be undertaken in Ontario in the coming years. Just this week, Premier Ford appeared delighted to attend the announcement of a $3.6 billion investment by automaker Stellantis to convert an existing Chrysler plant in Windsor to manufacture electric vehicles (EVs). Just under a third of this total amount will be coming from taxpayers, split between the provincial and federal governments. Interestingly, Prime Minister Trudeau was also at the announcement, appearing to team up with Ford mere weeks before the upcoming Ontario election. Liberal leader Steven Del Duca could not have been too happy about this scenario, but Trudeau seemingly found the ribbon-cutting too tempting to worry about local political realities.

Large new business investments in the province are surely good news, but taxpayers should always question whether the subsidies involved are justified or necessary at all. If an investment is a good business proposition, there should be no need for government funds to sweeten the pot. Subsidies are also motivated primarily by politics, not sound business or economic principles. Many billions of taxpayer dollars are spent because some special interest group or other is a good lobbyist or because a particular issue is trendy, not because public money is required for a worthwhile project. We need only look at all of the money devoted to environmental causes with little or no positive impact on the environment to witness that truth.

Subsidies are often used to bail out failing industries. The auto sector is a prime example, as it seems to regularly appear at the government trough for one reason or another. The massive bailout of a number of auto companies in 2008 was a case in point. In this type of situation, the companies that were well run had their tax dollars devoted to the incompetent, with governments effectively rewarding failure. Much of these subsidies went to shore up unfunded liabilities in the generous defined benefit pension plans of autoworkers. So basically, taxpayers, most of whom have no pension plan at all, were asked to sacrifice funds for their retirement so others could enjoy benefits they will never have. Subsidy advocates claim in such circumstances that the loss of jobs and industry would be too drastic without the bailouts, yet what actually tends to happen in such circumstances is that companies reorganize themselves such that they are more viable going forward, albeit following a period of disruption.

In the case of these auto sector bailouts, it was also interesting to see that the so-called Big Three unionized automakers were the ones that sought the bailouts, not the non-unionized companies such as Toyota or Honda. The fact that the same automakers repeatedly come to the table for public money suggests there is something inherently wrong in this sector if so many companies cannot succeed in business without ongoing taxpayer assistance.

Another issue is that the lion’s share of subsidy dollars always goes to large corporations at the expense of the small- and medium-sized business sector. This is mostly due to the fact that big companies have the resources to navigate the complexities of government rules and bureaucracies to qualify and advocate for the subsidies. It is also much splashier from a political standpoint to announce a big-ticket project rather than hundreds of smaller dollar value ones, even though the smaller projects may cumulatively be much more beneficial for job creation and the economy than the one big project.

After their time in politics is done, most politicians enjoy sitting on corporate boards and being paid sizeable fees for doing so. Small businesses cannot offer that perk, so they tend to have less political clout. A much more fair and economically sensible approach would be to take the billions spent on subsidies and use the funds to reduce tax rates and other government costs for all businesses.

Subsidies also usually have a political motivation that overrides whether the project is actually the best use for the funds spent. Data have shown for decades that ridings that have elected politicians from the party in power at the time always attract more government spending than those who dare to support another party. Just look at how the current federal Liberal government treats Alberta for proof of this assertion.

Defenders of corporate welfare always say that we have to engage in this kind of thing because other countries/jurisdictions do and if we didn’t match their efforts we would lose out. Although it is certainly correct that other governments also engage in this, research has shown for years that in most cases the investment would have proceeded without the subsidies.

Although the weight of economic evidence does not support the case for corporate subsidies, political realities suggest that the practice is here to stay. At a minimum, taxpayers should demand that governments follow up regularly on subsidy recipients to ensure their promises as to job creation and future tax revenues generated justify the monies spent. Governments of all political stripes are notoriously negligent with this kind of follow-up for good reason, as it will show in most cases that taxpayers are not getting a good deal and that frequently subsidy funds are a complete waste.

It’s no wonder politicians love subsidies – they get to cut ribbons, make nice announcements, and take credit for spending someone else’s money. But taxpayers should hate them.