The Problem with Unions 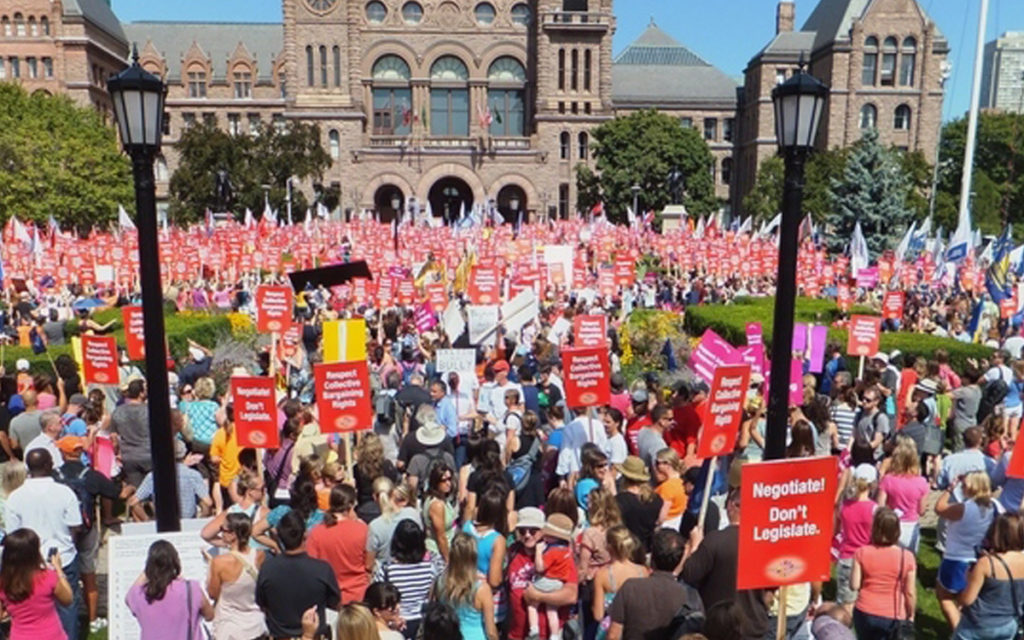 There was a time when labour unions actually did care about all workers and advocated policies that were geared to give average people bargaining power in the workplace.  Those days are long gone.  Although today’s unions still claim to be the voice of the average worker, they have instead become merely another self-interested lobby group that is all about lining their own pockets at the expense of others.   There is of course nothing wrong with any group advocating for their own interests in a free society, but all such groups should be on a level playing field to do so.  Yet unions in Canada have a highly privileged status not enjoyed by other interest groups or even by unions anywhere else in the developed world.  Therein lies the problem.

Canadian unions can force workers in unionized workplaces to pay union dues by law, and there is no requirement for any transparency as to how those forced dues are spent. Virtually all other countries in the world either permit workers a choice as to whether they want to pay union dues or not, or if dues are mandatory unions must publish their financial statements and demonstrate how the dues are spent.  In many countries, unions are permitted to enforce mandatory dues but they must prove they have been spent only for collective bargaining purposes.  Any union expenditure on political causes or other non-bargaining purposes can only be sourced from voluntary contributions from members.  Unions in Canada also have considerable tax advantages, in that dues are tax-deductible, unions themselves don’t pay taxes nor do they pay taxes on investment returns.  In short, unions have a highly privileged position in Canada not accorded to any other group, predicated on the belief in their noble calling of representing the interests of all workers.  It has been clear for some time that unions do not represent all workers – in fact they represent fewer and fewer workers as time goes on – so it is past time their immensely privileged status was questioned and ultimately changed.

A few decades ago, about 30 per cent of workers in the private sector in Canada were union members.  As a result of technological change that made many industrial jobs obsolete and increased global competition that unions found impossible to contend with, the rate of unionization in the Canadian private sector is now about 14 per cent and falling.  This is happening despite employment standards legislation in all Canadian provinces that favours unionization. But the real problem is in the Canadian public sector where the unionization rate is almost 80 per cent – the highest in the world.  As the public sector doesn’t operate in a competitive marketplace, it can continue to impose cost increases on the taxpaying public ad nausea.  And that is exactly what it has done, with the result that government employees have much higher compensation levels on average than the private sector, and rich benefits such as defined benefit pensions and early retirements financed by the private sector worker who has none of these advantages. This is not only profoundly unfair, but financially unsustainable.  And those unions who profess to care about all workers are perfectly happy with this situation as union bosses earn salaries comparable to corporate CEOs and the revenue flows in unabated via mandatory dues.

This is all bad enough, but the fact that public sector unions are increasingly active in our elections adds another dimension of concern.  We are seeing this in spades in the current Ontario election campaign. As unions devote their sizeable war chests to electing governments that will perpetuate the union gravy train, it is inevitable that government spending and debt will grow and an ever-increasing burden will be placed on the beleaguered private sector taxpayer to fund this endless largesse.  It is a vicious cycle that is bound to end badly.

There are two possible outcomes.  One is that the public sector unions will bankrupt the rest of us and we will become like Greece, Detroit, California and so many other jurisdictions where public sector union greed has finally become so excessive that it beggars the ability of everyone else to sustain it. The other alternative is to put unions on a level playing field with every other interest group and get rid of mandatory dues and the unique tax advantages before they are permitted to impoverish everyone else and undermine the entire economy.  The second option is clearly preferable, but until a majority of the electorate wise up to the union game plan and refuse to support governments that enable unions to continue their pillage, we may well end up with the Grecian Formula.