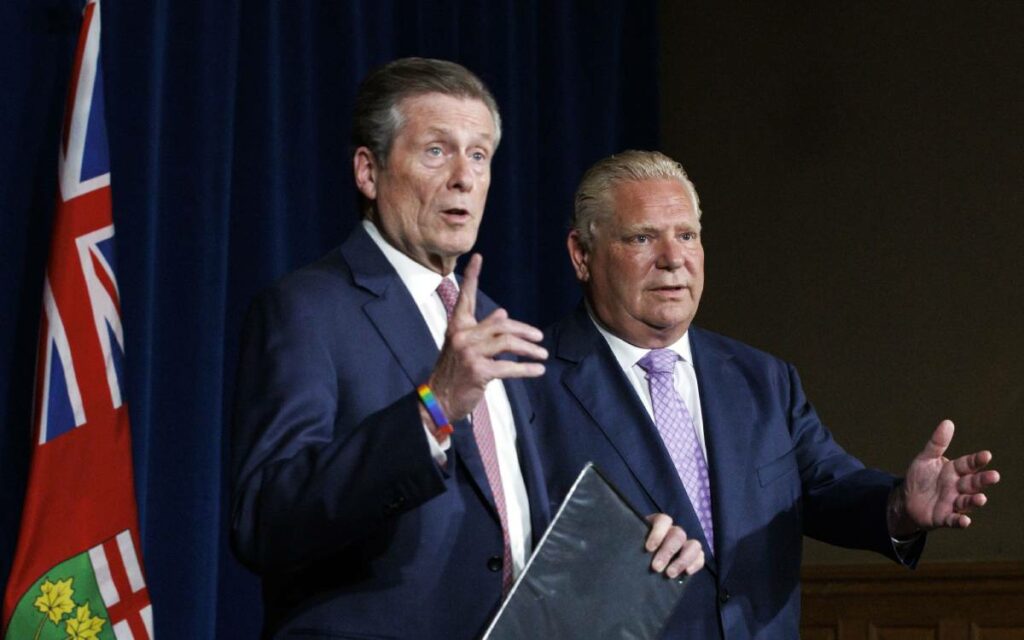 New legislation introduced by the province would give the mayors of Ontario’s two largest cities, Toronto and Ottawa, the ability to streamline important decisions. Mayor of Toronto John Tory (pictured left, beside Premier Doug Ford) said he is in favour of the change. Mayor of Ottawa Jim Watson (not pictured) said he doesn’t see the benefit of increased mayoral power. Photo credit: The Canadian Press/Cole Burston

As the Ontario legislature returned for a rare August sitting, one of the more interesting – and surprising – pieces of legislation proposed is the “Strong Mayors, Building Homes Act”. Introduced by Municipal Affairs and Housing Minister Steve Clark, this Act is intended to give the mayors of Toronto and Ottawa the ability to veto bylaws that can be seen to conflict with priorities of the provincial government, notably building housing.

The minister said Toronto and Ottawa were singled out as they are expected to be the locations in most need of new housing for the foreseeable future, but that more Ontario cities could be added to the legislation in future. The legislation would permit a mayor to overrule council approval, and council would be able to override the mayor’s veto if two-thirds of councillors were in favour. The legislation also puts the responsibility for the municipal budget squarely in the mayor’s hands, as opposed to the council as a whole, as well as giving the mayor the authority to hire and fire some senior government officials.

Mayor John Tory of Toronto, who is running for a third term in this year’s municipal election, declared himself in favour of these increased powers and said he believed the changes would enable city hall to function more efficiently. Mayor Jim Watson of Ottawa, who is not running for another term, stated that he did not request increased powers and did not believe they were needed. Other cities in the province have expressed interest in these powers in the past.

This change was not mentioned by the PCs during the recent provincial election, although there has been some discussion on the topic in past years as some mayors – notably John Tory – had expressed frustration with the fact that mayors had only one vote just like any councillor. The reaction by other players was mixed, as councillors predictably did not like their powers being diminished and provincial opposition parties claimed the change was an “attack on local democracy”.

The principal target of the legislation is to streamline the process for building more housing as well as critical infrastructure. Studies have identified municipal zoning rules, and particularly those which mandate only the construction of single-family dwellings in many neighbourhoods, as a major barrier restricting the supply of housing and driving real estate prices through the roof. Although recent interest rate increases have started a price correction in the market, the medium- to long-term outlook for demand in urban centres, especially with record-high immigration levels in Canada, indicates that considerable additions to the housing stock will be needed.

Whether this increase in mayors’ powers will end up having much of an impact on housing construction is yet to be seen. There is no doubt that current municipal zoning restricts housing supply, but that is because existing homeowners like it that way. Ultimately, politicians respond to votes and once a few multi-storey housing units get built in neighbourhoods that were previously populated only by single family dwellings, there is likely to be a giant blowback against the politicians that supported the changes. Much of the opposition to new housing developments is based on not wanting to develop regions like the Greenbelt and other environmentally protected areas, and that opposition is unlikely to change in future. The mere act of giving mayors more power may lead to little change, as political factors mitigate against those powers being exercised.

On the other hand, mayors with the new authority lose an excuse for inaction, which could increase accountability as a mayor overriding councillors will not be able to shirk responsibility for that decision. The same goes for councillors who choose to band together to override the mayor’s veto. Anything that could increase accountability at any level of government would be a welcome change. However, the prospect of being held accountable could also serve as a disincentive to use the power.

Overall, the new policy hands off potentially significant new authority to Ontario’s mayors. Only time will tell if they choose to use it.