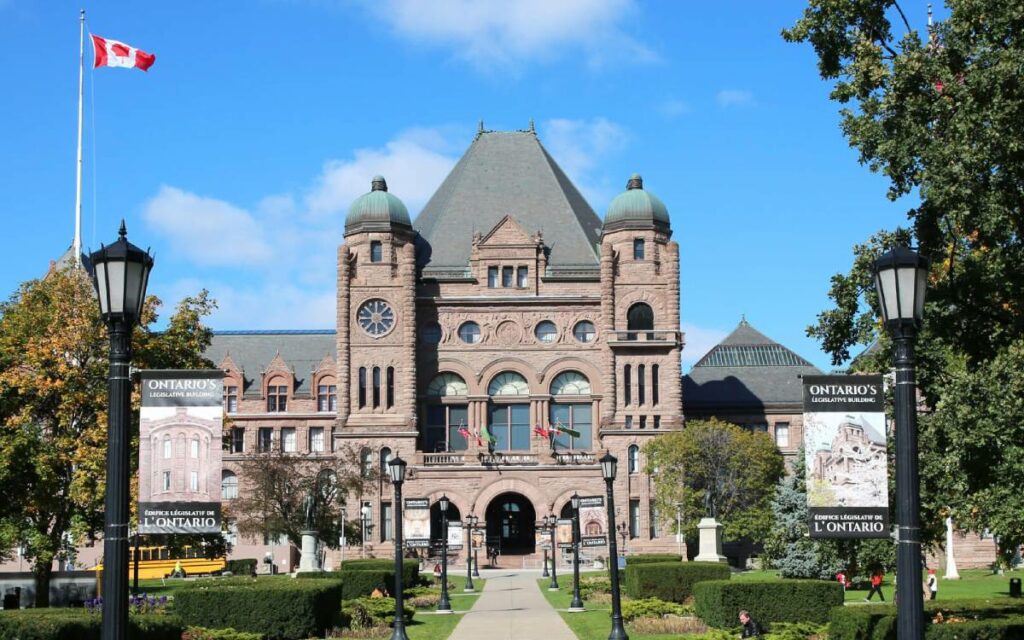 Ontario Legislative Building in downtown Toronto. High cost and poor performance are hallmarks of the public sector, and they are brought about and maintained across the country by a single phenomenon: unionized government monopoly. Photo credit: OLA

The hits just keep on coming. Blacklock’s Reporter, an independent media organization that does not take bailouts from government and is therefore free to expose the disgraceful extent of taxpayer abuse in the federal government, regularly documents some of the worst instances of waste. Reading Blacklock’s Reporter daily is a masochist’s dream for private sector taxpayers.

Some recent stories include the awarding of a medal to every single employee at the federal Public Health Agency of Canada (PHAC) to honour them for pandemic performance. This was the group that couldn’t manage to provide personal protective equipment (PPE) properly during the pandemic, paid no heed to previous reports on SARS although that was one of their principal jobs, and received a scathing assessment from the Auditor General in 2021 that the Agency was woefully unprepared for the pandemic, failed to properly document travellers that had been ordered into quarantine, were accused by scientists working for the government of ignoring or downplaying early warnings about Covid, and generally performed abysmally throughout the pandemic. But every single one of them received medals.

It’s hard to make this stuff up.

Another recent Blacklock’s story documented how the number of federal government managers making $100,000 or more annually grew from 69,007 in 2019 to a record 114,433 by 2021, an increase of a whopping 66 per cent, based on information from the Canadian Taxpayers’ Federation. Federal government employment has grown like mad in recent years, leading to the total payroll reaching almost $60 billion in 2021, a jump of $4.4 billion from the previous year.

Provinces cannot be left off the hook either. Virtually all provinces increased their hiring significantly during the pandemic as well, even though there were large numbers of government employees at all levels that were working from home on reduced hours if at all. Although some politicians have been boasting about the recovery of the overall employment numbers in Canada, labour force statistics show that by far the largest proportion of job creation has taken place in the public sector, not the productive private sector that finances government. In terms of private/public sector compensation levels, research has shown for decades that jobs in government pay anywhere from 25 to 40 per cent more on average than comparable positions in the private sector if generous pension and other benefits are included.

Private sector taxpayers may grudgingly find this situation acceptable if they were enjoying high-quality public services. Yet at a time when government size and cost are increasing dramatically, we see exactly the opposite in terms of public services. Recent warnings from medical professionals in several provinces state that our public health care system is collapsing, and horror stories abound about emergency room closures, ridiculous wait times for basic treatment and people suffering and even dying when unable to receive timely care.

Although some politicians and health care workers claim all we need to do is throw more taxpayer dollars at health care, international comparisons show Canadians are already big spenders without the results to match. In addition, health care spending already takes up almost half of provincial budgets right across Canada and all government are heavily in debt, so you have to ask yourself where the added money is going to come from and which other government services should be cut to fund even more health care spending.

Another area of significant provincial spending is education, which is currently a mess of politicized infighting about such controversial teachings as Critical Race Theory and gender identity in the lower grades while students graduate from secondary school with such poor literacy, numeracy and problem-solving skills that universities find they now have to offer remedial courses in these subjects. And once again, although we are already spending large amounts on education compared to other jurisdictions around the world, recent inflationary trends suggest we’re in for more taxpayer pain. For example., Ontario is facing contract negotiations this autumn with the teachers’ unions, and one education workers union has already taken a shot across the bow by asking for a wage increase of 11.7 per cent.

The dysfunction in our very expensive Canadian governments is widespread, and I haven’t even mentioned passports, the mess at our airports, record long immigration backlogs and other ongoing disasters. Although many suggestions have been made as to how to fix the problem, there has not been mention of one of the key underlying problems that can be summed up in three deadly words: unionized government monopoly.

We know that unions protect the incompetent while the best workers are not rewarded for excellence, encourage practices such as taking lots of sick leave, early retirement and other things that mean more people must be hired to fill the gaps leading to more union dues and higher revenues for unions. We know unions fight the adoption of technology that could make government more efficient as such change typically entails reducing the employee complement. Unions are declining in the private sector as their outdated practices don’t work within a modern, globally competitive economy. Yet they continue to thrive in government where there is no competition, and the customer (taxpayers) is forced by law to pay.

Something has got to give, and if money was the solution Canada would already be enjoying top-notch public services. Fundamental structural changes are what is really needed in the delivery of so many public services at all levels. That change should start with consideration of the three deadly words.