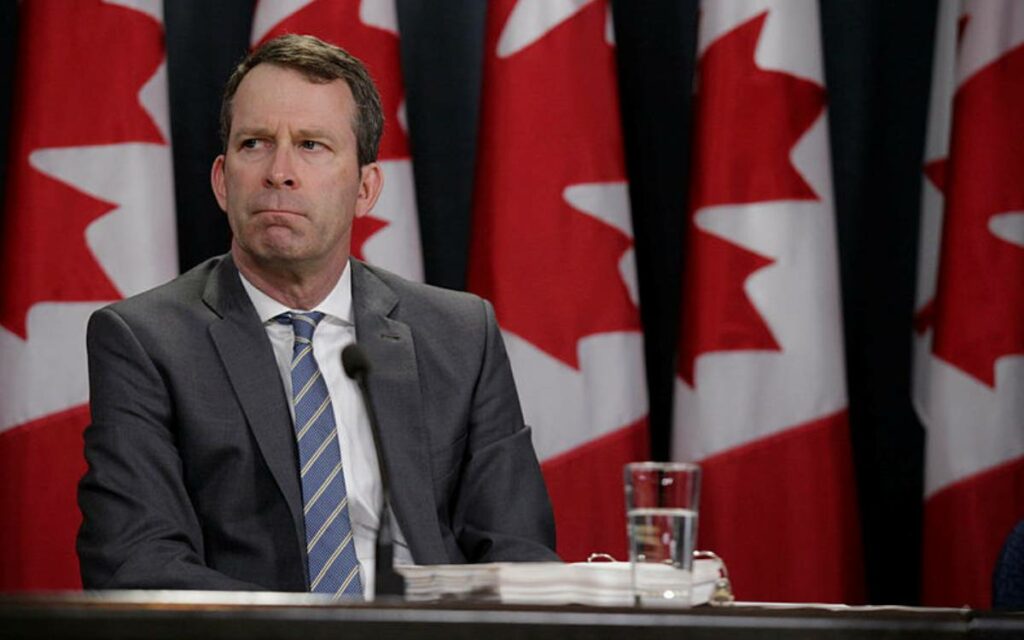 In the wake of the Liberal’s economic statement, Finance Canada Deputy Minister Paul Rochon tendered his resignation offering no reason for his hasty departure.

The 237-page document was wonderfully wrapped in recycled, biodegradable paper, sealed with red tape and ribbons, and adorned with an oversized crimson bow. With her usual exuberance, Freeland explained she would provide details of the gift’s contents sometime in the future – and in so many words alluded to the idea that, in such troubled times, Canadians should be thankful for such a thoughtfully wrapped gift.

There were a few specifics revealed in the Finance Minister’s statement. The Liberal government is prepared to spend up to $100 billion over three years to kick start the economy, spending “whatever it takes” to help Canadians and businesses stay safe and solvent. Freeland reported a deficit projection for the fiscal year ending in March 2021 of more than $381 billion (and possibly ballooning to over $400 billion).

Freeland made none of the anticipated major structural spending announcements, only offering “down-payments” on the Liberal promises of national child care, job training and green initiatives. She threw money at new federal secretariat bureaucracies: $4.3 million for national child care and another $15 million for Indigenous early learning and childcare. She pledged $447.5 million to implement a youth job program that will deliver 40,000 summer jobs for students (presumably not administered by the WE charity). And there were the Liberal’s hallmark green promises restated by Freeland: the $3.6 billion tree planting initiative that will plant saplings at $1.50 + per tree; and, another $1.5 billion on top of the billions already spent in the last five years to go towards clean tap water in First Nations communities.

With this economic statement the Trudeau Government also introduced a new “free form approach” of “fiscal guardrails” to guide its stimulus spending through the post-COVID economic recovery. These guardrails were not clearly defined but mention was made of assessing labour market indicators such as the employment rate, the unemployment rate, and total hours worked. Kevin Page, Canada’s former parliamentary budget officer commented, “I think the minister is breaking new ground.” In an interview with iPolitics, Alexandre Laurin of the C.D. Howe Institute warned, “… they’re not credible because they haven’t been described… We do not know what those fiscal rules are. We don’t even know the precise indicators they are following or what level would trigger anything.”

With Monday’s ministerial statement and the subsequent debates in the House of Commons through the week, Canadians have learned more about the country’s economic standing.

Given the flood of red ink and uncertain times, the Trudeau Government’s fiscal approach has been met with dismay and a feeling of loss. Canadian Taxpayers Federation Federal Director Aaron Wudrick lamented Canada’s debt will hit $1 trillion within weeks. Wudrick stated, “Alarmingly, there are no fiscal targets, and the government actually pledged to add another $100 billion in debt after the pandemic ends, effectively committing to spend money before it even knows what to spend it on. There doesn’t seem to be any place where the Trudeau government has even tried to save money and there’s no tax relief. A pandemic isn’t a free pass to cynically increase spending on everything, especially when taxpayers are struggling.”

John Ivison of the National Post captured the sentiments expressed by many financial analysts and political pundits with his sobering observation about the fragile state of the Canadian economy. Ivison wrote, “The sad truth is, Canada is no longer where you want to be, if you are going for gold. We are consuming more than we are producing; we are swimming in debt and even companies based here prefer to invest somewhere else. The government’s fall-back is that interest rates are rising more slowly than the economy is growing, so we can keep expanding programs without having to pay for them.”

In the wake of Freeland’s Monday performance there came an announcement on Tuesday that reverberated through Ottawa’s corridors. Finance Canada Deputy Minister Paul Rochon tendered his resignation offering no reason for his hasty departure. Rochon provided no comment on his political bosses through the past six years – and perhaps his silence speaks volumes. In the last four months, the Trudeau Government has lost both its Finance Minister and Deputy Minister and a new finance brain trust is left to chart a course clear of the pandemic and debt pressures.

PM Trudeau followed-up this bombshell resignation by serving notice that the economic statement will be subject to a confidence vote in the House of Commons. Insisting he is not wanting an election anytime soon, the PM said he felt his pandemic relief measures should have Parliamentary approval. So, MPs will be forced to accept the Liberal fiscal plan unwrapped lest force a federal election in the cold of January. And as Tim Powers suggests in his Hill Times column, weary Canadians are sure to accept the Liberals’ generosity for “there is a chicken for every pot.” Therefore, we can expect in the coming weeks that Liberal politics will trump any sense of fiscal reality.

It appears the PM and his chief financial elf, Finance Minister Freeland, have delivered an extraordinary Christmas present.