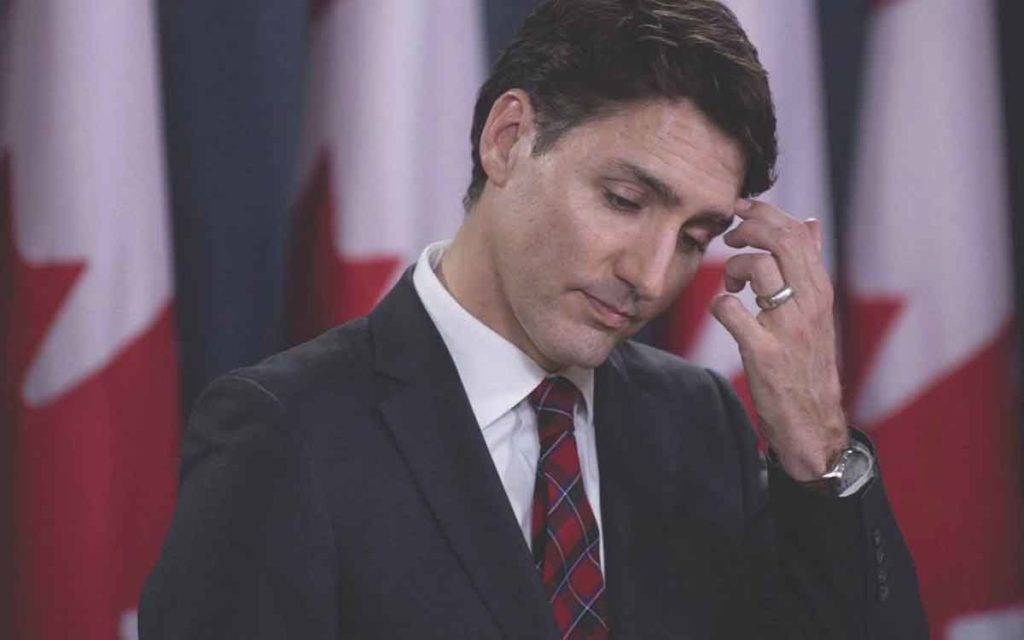 Bloc Leader Yves-Francois Blanchet threatened to trigger a Fall election if the PM, his Chief of Staff Katie Telford, and Finance Minister Bill Morneau do not resign.

Though he was hiding away at an undisclosed summer holiday rental on Georgian Bay, this week proved particularly bad for Prime Minister Justin Trudeau as a steady stream of stories emerged relating to multiple scandals that threaten to swamp the Government’s agenda.

On Wednesday, Bloc Leader Yves-Francois Blanchet threatened to trigger a Fall election if the PM, his Chief of Staff Katie Telford, and Finance Minister Bill Morneau do not resign. Blanchet said, “Keeping people in office who are “mismanaging” the government would be more dangerous than sending Canadians to the polls in a pandemic.”

In the House of Commons, Conservative MP Candice Bergen received a standing ovation from the Opposition benches when she criticized the Liberals for “evasive non-answers.” Bergen stated: “Six months into this pandemic, and six years into this government, and the Prime Minister will be remembered for a $343-billion deficit and for setting the lowest bar ever for a prime minister’s conduct in the history of this country….  With the Liberals, it really is about who one knows, not what one knows. This makes the Liberal sponsorship scandal look like child’s play, actually. Can the Prime Minister tell us – oh sorry, he is not here. Can somebody on that side tell us why the Prime Minister thinks the rules do not apply to him?”

From the week’s headline news, there are many outstanding questions to be answered. Foremost, there are on-going revelations of misdeeds involving the $912 million WE charity scandal: questions about $43.5 million in administration fees, WE’s $300,000 payment to Margaret and Trudeau family members, and the government’s due diligence in approving the sole-sourced contract. Bardish Chagger, Minister of Diversity, Inclusion and Youth, told the House of Commons Ethics Committee Tuesday that an initial payment of $30 million was paid to the Kielburger brothers and she did not know whether they had returned the money upon the cancellation of the contract. This raises important questions as to how the government paid the Kielburgers before approval from Treasury Board and Cabinet? Who wrote the $30 million cheque to them and under whose authority?

PM Trudeau and Finance Minister Morneau are being investigated by the Ethics Commission for not recusing themselves from the Cabinet approval of the $912 million contract, though both their families have pecuniary interests with the charity.

Then there is potential wrongdoing in an $84 million contract outsourced to a company tied to PM Trudeau’s Chief of Staff’s family. The story this week is that neither the PMO nor Finance Minister Office will disclose whether Katie Telford’s husband Robert Silver communicated with them since becoming senior VP of a mortgage company in January 2020. NDP MP Charlie Angus is seeking answers on how this $84 million contract was sole-sourced, “That’s very disturbing, considering that both the prime minister’s and finance minister’s offices are already under serious investigations for ethical lapses in conflict of interest. We have ethical standards, and if they can’t answer that question, it really raises the question whether or not the Liberal government believes that the laws actually apply to them.”

Also this week, two more questionable contracts made headlines. News broke that a Montreal-based company owned by Frank Baylis, a former Liberal MP, was given a lucrative contract to make 10,000 pandemic ventilators by October 21st, even though Health Canada flagged the Baylis Medical Company’s machine had not been approved by any jurisdiction. There was also news of a $381 million sole-sourced contract to produce medical masks to a Quebec firm Medicom Inc, despite the fact that this firm had no manufacturing facilities in Canada and will be producing masks in factories in China, Taiwan, the U.S. and France. Medicom has yet to deliver any surgical masks.

There’s more. MPs are pressing the Trudeau Government to reveal details of $5.8 billion worth of federal contracts awarded during the pandemic response through the last few months. However, senior bureaucrats in Public Services and Procurement Canada are refusing to make public any details on the basis of protecting Canada’s supply chains. So, $5.8 billion of taxpayers’ dollars has been given to private companies and there will be no public accountability. Furthermore, the latest figures provided by the federal department reveal that less than 40% of these contracts were given to domestic suppliers – in other words more than 60% of this money is going to foreign-owned companies offshore.

And further to this, we are now aware that there are tens of billions of dollars in infrastructure projects that are unaccounted for by Infrastructure Minister Catherine McKenna’s department. The Parliament’s Budget Office (PBO) has been unable to find any evidence of roughly 20,000 projects totaling approximately half of the program’s $57.5 billion budget. Head of PBO Yves Giroux reported to MPs that he is perplexed how 20,000 records of infrastructure projects are nowhere to be found.

Conservative MP Pierre Poilievre summed up the MPs’ frustrations with the Liberal Government’s cone of silence. “Our economy will take a $100 billion hit this year. And what is the Prime Minister focused on? Not on getting Canada through this crisis or rebuilding our economy, but on helping his friends, helping his cronies and creating programs that are so complicated that only the most sophisticated, with the best lobbyists and consultants, can benefit and profit.”

Warren Kinsella, long-time Liberal party strategist and former PMO staffer to PM Jean Chretien was more pointed in his criticisms of the Trudeau Government’s modus operandi. Kinsella stated: “… the allegation is that Trudeau’s cabal sought to enrich themselves during a pandemic that is impoverishing millions of Canadians… the governed were losing their homes, losing their jobs, losing their futures. While Trudeau’s gang were apparently making out like bandits. That is not merely wrong, it is actually evil. It is beyond the pale. Beyond words.”

Kinsella’s blog post this week concludes: “It goes on and on and on. It never stops, this fetid, foul stew of corruption and moral blindness. Even during a pandemic, the Trudeau government’s descent into the muck continues unabated. So, there’s a name for what we’ve now got. There’s a name for a government like Justin Trudeau’s – a government run by those who seek status and personal gain at the expense of the rest of us. It’s a kleptocracy.”

It was indeed a horrible week for the scandal-plagued Liberals in Ottawa — a fine time for the PM to be enjoying the sunny skies over Georgian Bay.