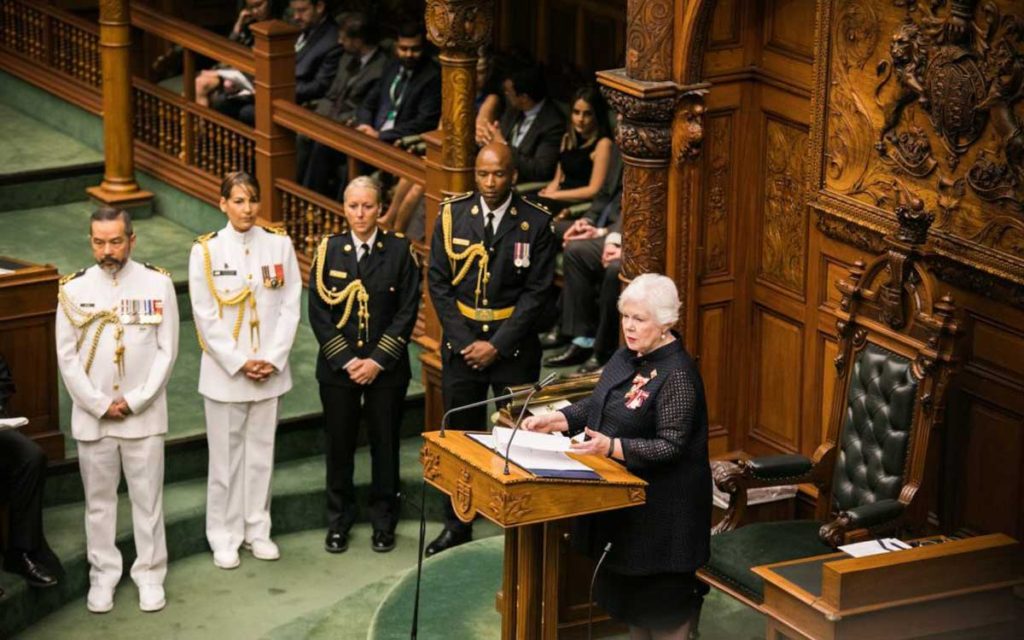 The Lieutenant Governor, Elizabeth Dowdeswell, delivered the Speech from the Throne to open the 1st session of the 42nd Parliament of Ontario.

Last week’s inaugural Throne Speech of the new Ontario government demonstrated a sharp change in direction for the province from the last 15 years of Liberal rule.  The theme of the speech was very much a continuation of the Progressive Conservative’s election campaign, as it reiterated the “government for the people” mantra and the intent of the government to reduce the burden it imposes on the lives of average Ontarians.

Virtually all of the Speech’s content was consistent with promises made during the election campaign, including such elements as the elimination of the cap-and-trade program and opposition to any form of carbon tax, a focus on tax relief, a reduction of the regulatory burden on business, a drop in gas and hydro prices and an overall plan to leave more money in the pockets of taxpayers instead of the coffers of government.  The Speech reiterated the Ford government’s earlier statement to remain united with its federal counterparts on trade issues that could threaten the economy.  Other topics noted in the Speech were various health care spending items and a “back to basics” approach to the public education system.  One item that was somewhat of a surprise was the plan to permit the sale of beer and wine in convenience stores and other retail outlets, a change long overdue. As with all Throne Speeches, there was little specific detail into how the various commitments were to be implemented, although the announcement of a Commission of Inquiry into the financial practices of the Ontario government accompanied by a thorough audit did give some idea of how the new government will approach this important issue.

Despite the fact that most Throne Speech content was merely a continuation of commitments made over the past couple of months, all of the usual suspects in the opposition parties, left-leaning media and elsewhere were highly critical and seemed surprised that election promises were being acted upon.  The consistent hot-button of sex education was naturally a focal point for critics, who claim that the new government’s plan to revert temporarily to the older sex ed curriculum while they conduct comprehensive consultations with parents and educators would be a terrible disservice to students.  Critics emphasized that since the older curriculum was created in 1998, it was woefully out of date.  What they failed to note was that the “old” curriculum had been in use in classrooms as recently as 2015 with no devastating results, although it surely does need a substantial update.

In addition to the anticipated change in direction, it is also noteworthy that the new government has chosen to conduct a legislative session during the summer months.  Typically following a summer election, a new government would take a couple of months off and reconvene in the fall.  The fact that Premier Ford and his colleagues have chosen to get right down to work is a good indication that they understand the seriousness of the many problems plaguing  Ontario, and the urgent need to work on solutions sooner rather than later.