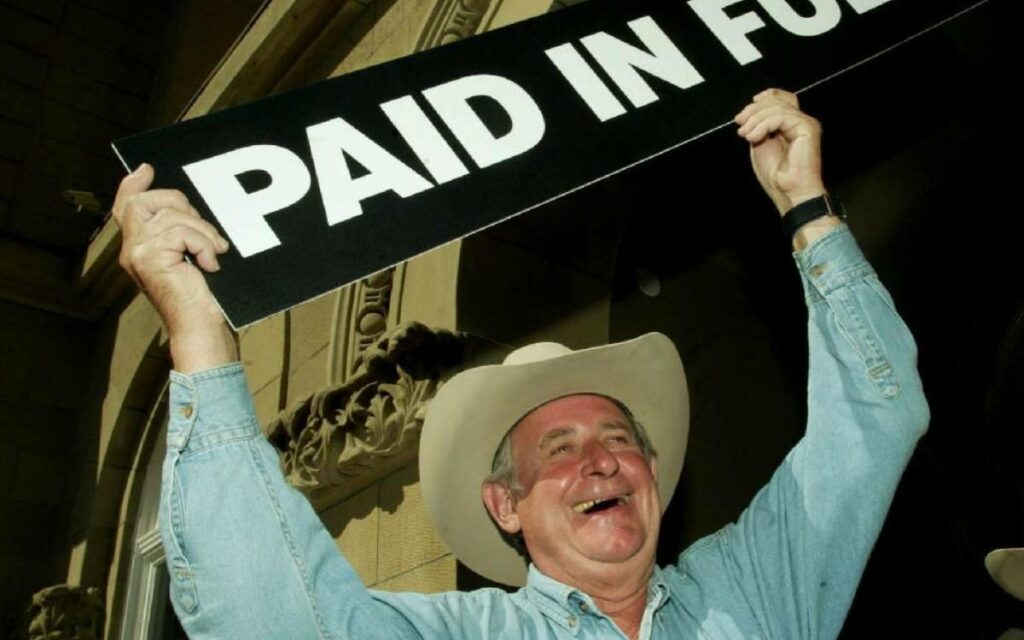 In July 2004, Alberta Premier Ralph Klein held up a Paid in Full sign after announcing that the province’s debt had been paid off. PHOTO BY COLLEEN DE NEVE /Calgary Herald

On July 12, 2004 then Alberta Premier Ralph Klein announced “never again will this government or the people of this province have to set aside another tax dollar on debt.”

The declaration was following news the province had paid off its debt in full. The result of several years of balanced and surplus budgets aimed at ridding Alberta taxpayers of the credit card balance.

To be fair, service cuts were part of that. However, having lived in both Alberta and spendthrift B.C. in the 1990s, it was the latter whose services were lacking, more so than the former. And B.C. had to go through a lot of cuts as a result.

Regardless, Mr. Klein’s strategy was a three-pronged attack, reduce spending, reduce taxes thereby increasing revenue though income growth. It was the holy grail of 1990s politicians, where balanced budgets were found not only in conservative Alberta, but also Liberal Ottawa, Democrat Washington, Labour London and yes Conservative Queen’s Park.

Going back to the age of King Ralph, Alberta political historians will tell you it was a diversified economy and not the then struggling oil and gas sector that was the key to balancing the books. Stockwell Day, Alberta Treasurer from 1997 to 1999, remarked about how if oil ever reached $16 a barrel Alberta would be “in clover.”

A lot has changed since Alberta was lowering its debt and deficit whilst reducing taxes – a provincial flat tax as an example. Free spending governments from the left and right side of the house, business killing red tape and regulatory costs and, the most damaging of all, historically low interest rates.

Historically low interest rates have allowed governments of all stripes to rationalize spending. Running up massive credit card debts all the while telling us not to worry, they have tons of room on their cards.

Here is the thing, regardless of the amount of room on the cards, having to maintain the balance or at the very least pay the interest charges, cuts deeply into spending power.

As I have written here on multiple occasions, if debt servicing – interest paid on the debt – was a ministry of the Ontario Government, it would be the third largest after Health and Education. This year it would be behind the Urgent Covid-19 Response – $15.2 billion – but only barely.

I know austerity is the last thing any of us should be talking about in the height of a pandemic, but here is the thing, it is $37.9 billion less for the people who will lose their jobs and go bankrupt. Less for the mental and physical health complications inherent with job loss and family break-up often caused by the same.

My belief of how a government should function is simple. Proper financial controls so there is the money needed to support the things people rely on government for.

I know the NDP believes we just need to raise taxes on the very rich and that will solve all the problems. Liberals seem to think businesses just need to be more environmentally friendly and they will grow. Conservatives – well they used to believe in reducing taxes to grow the economy and overall costs.

I am not sure any government can claim they support the steps taken by governments across the spectrum in the 1990s and respect the money they are given.

Yes, we are in the middle of a pandemic and people need government supports now more than ever. I would argue, the support people need will be just as important in the recovery as it is in the survival phase.

In fact if you look at the number of boarded-up shops, for lease signs and the sheer prices of rentals in Canada’s largest and most heated real estate market, the recovery may be even more painful.

All of this is to say governments need to start getting back to the basics, the essentials. As I once wrote for a certain MPP from just west of St. Catharines, there is a difference between ‘must have’ and ‘nice to have’.

Job loss, business and personal bankruptcies will lead to less tax dollars. The challenges to physical and mental health will mean more demand on what is remaining. Right now we might not have much of a choice than to keep running up the credit cards.

Doubling down on the important things and stretching every tax dollar is what is essential. Governments will need to put their hobbyhorses away if they are going to have the revenue necessary to pay for the programs we all need.

A concerted effort to focus on what is needed, reduce the demands on people’s paycheques – tax relief – and develop a real plan to tackle debt and deficits to appease the rating agencies is what is needed.

Think about this for a moment, the quickest impact the debt and deficit could have on budgets is a change in credit rating. A reduced credit rating could result in increased interest rates.

Every point increase in interest rates equals between $500 million and $1 billion in increased payments in Ontario – double for Canada.

That is your money going to service debt and not toward the services we all rely on governments for.

At present, it has been two years since the last federal budget. Meaning, as a country, we have no plan. Just like the response to Covid-19.