Too many young people attend university 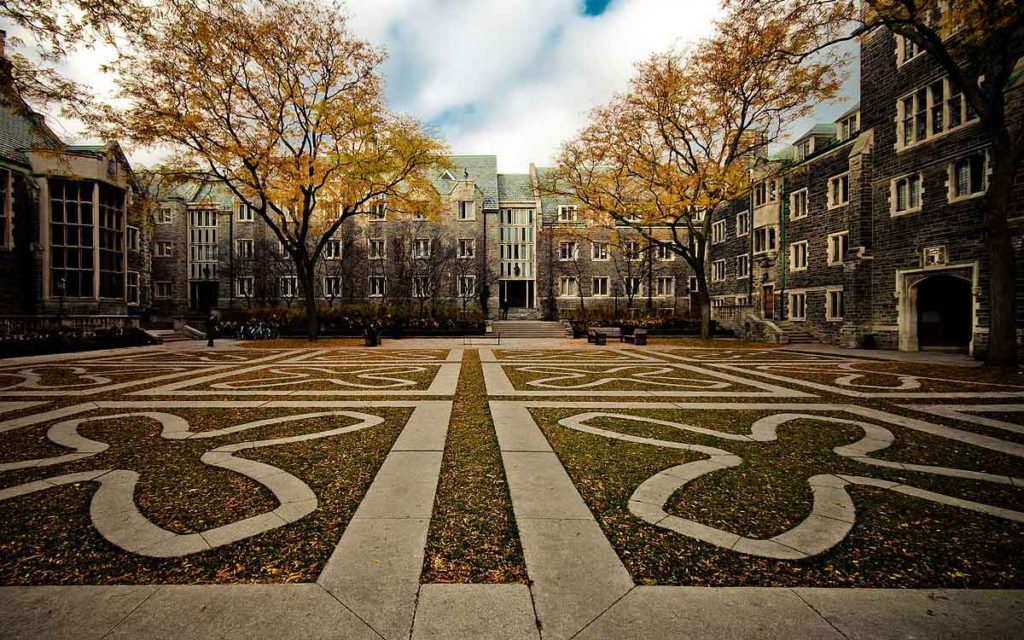 Trinity College quad at the University of Toronto.

Of the some 165,000 private, public, and Catholic high school students in Ontario who graduated in 2016 (based on an 80% four-year graduation rate), around 89,000 applied to university in-province, with close to 67,000 formally registering as full-time students.

Based on these numbers, approximately 41 per cent of all local graduating high school students enrolled in first-year, full-time study at one of Ontario’s 21 universities in 2016.

And that figure just includes Ontario institutions. If one factors in local students who chose to attend university out-of-province or internationally, the number approaches half of Ontario’s 2016 secondary school graduating class.

Some may look at such a statistic and be delighted: the hallowed halls of academia still hold an air of advanced achievement.

Entering an apprenticeship, attending community college, or simply pausing to work and figure out one’s future goals are all avenues that suffer from enduring stigma.

When an 18-year-old honours student says she wants to be a carpenter instead of an economist, her friends and family are more likely to laugh than offer words of encouragement.

But the reality is, Ontario does not need more economists, it needs more carpenters.

The arts, humanities, and most of the social sciences have become a racket.

Unless a student intends to become an engineer, doctor, registered nurse, lawyer, or something of the like, a bachelor’s degree (today) is hardly worth the paper it is printed on.

CNN’s Anderson Cooper once chimed that when he was contemplating future careers at a young age his mother told him: “follow your bliss”.

But, following your bliss, or dream, or passion is a lot easier when your mother is a wealthy heiress. For most, however, doing what makes you happy is simply not possible, in demand, or financially viable.

Speaking to Entrepreneur Magazine in 2015, Rowe said instead of following your passion, look to the “cold, hard, unglamorous calculus of practicality” to drive your job search.

In place of passion, according to Rowe, many successful people simply find, exploit, and master an opportunity, and later “[figure] out how to love it”.

If one wants to learn about ancient Roman fresco painting, he or she can easily do so independently online or in a local library. Academia no longer holds a monopoly over information.

Yes, a humanities degree will teach you how to read and write a little bit better. Though, an instructor and assignments are not required for self-betterment. Any driven person with a baseline education can consume more books and improve their compositional skills from home.

That being said, should no one attend university in 2019?

The world even needs the occasional historian and journalist.

However, too many disinterested and, frankly, under-qualified young people continue to attend university because they feel like they have to.

Since 2000, university enrolment in Ontario has grown by 69 per cent.

Despite this dramatic spike in education level, the province’s unemployment rate has, in fact (depending on one’s dataset), steadily increased — or, at the very least, remained constant.

It is true, though, that when employed university graduates do make more money on average than their less-educated counterparts.

However, these figures are misleading.

Most students who choose university over any other alternative are, generally speaking, determined, intelligent, and already likely to be successful. In other words, they did not necessarily need a degree to end up financially comfortable.

As the old statistical axiom goes: correlation not does imply causation.

So, what’s the solution?

Seeing as it is unlikely that universities will stiffen admission standards and decrease enrolment (academia is a business, after all), any change will have to emerge at a sociocultural level.

Parents, teachers, employers, and government agencies must all come together in concord to fairly promote the entire spectrum of post-secondary possibilities to today’s youth. Widespread participation is needed to slow the cognitive inertia.

University is great, for some. The trades, technical college, entry-level opportunities, and entrepreneurial ventures are just as good (if not better), for many others.