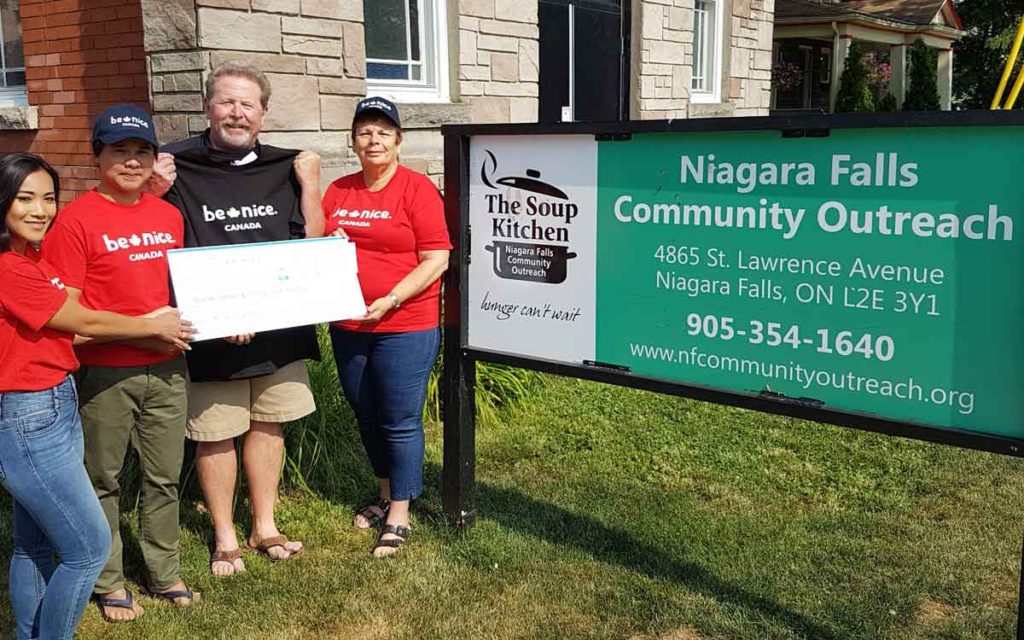 It’s a simple message printed in white on a bright red t-shirt: Be Nice. But it’s resonated with tourists in Niagara Falls and now across Canada.

Hugh Hockton, owner of the Niagara River Trading Company came up with the idea of putting the two words on a t-shirt while south of the border. “I was down in Florida and I saw something with ‘Be Nice” and I thought what a great simple message. It’s Just a nice thing to say and do.”

When he returned home he got to work on creating the t-shirt that includes a white maple leaf and is branded for Niagara Falls specifically. He partnered with the HOCO a local company that owns, among other things, Canada Trading Company, a large souvenir shop on Clifton Hill. The shop set up a display in the middle of the store with the Be Nice shirts and on Canada the staff all wore them. Customers loved them and they were flying off the shelf. It’s a great story for two local businesses partnering up but it doesn’t end there.

There’s a tag on each t-shirt. On one side displays the logo for the Niagara Falls Soup Kitchen. On the other is a brief paragraph that states what the soup kitchen’s mission is and how they will receive a percentage of every t-shirt sold. The message ends with, “Thank you for being nice.”

The HOCO staff not only purchased their own shirts but also donated additional money. On Thursday they presented a cheque to Chris Watling of the Soup Kitchen for $631.35. Watling was thrilled and as she thanked the HOCO staff who visited the soup kitchen along with Hockton, she explained how the organization serves138 to 150 meals per day using a team of volunteers. They only have one paid employee. She said it’s local businesses like HOCO and Niagara River Trading Co. and many others that keep the soup kitchen going. She said the Casinos, Soctiabank Convention Centre and all the hotel owners have been massive supporters over the years providing food, volunteers and funds to keep the lights on and the food being served to those in need.

Hockton plans to spread the Be Nice message across the country and already has shirts in Vancouver, Montreal and Banff. He said he will be travelling to those cities to find a local charity so that they can set up a similar program to what’s being done in Niagara Falls. In fact, the soup kitchen wasn’t the first choice but it turns out to be the best one. “I tried calling a couple of national charities to partner with and nobody got back to me,” explained Hockton.  So Hockton called his friend Cliff Sexton, a retired Niagara Regional Police officer who volunteers at the soup kitchen. “Cliff was instrumental in making this connection happen.” Hockton also praised Cate Wood and Erin Zupan from HOCO. “Without them none of this would have happened.”

Niagara Falls regional councillor Bob Gale whose family has supported the Soup Kitchen for years said it’s a great gesture with a great message. “I think it’s awesome,” said Gale. “Local businesses like HOCO and Niagara River Trading Company do so much for this community and most of it goes unnoticed. They’re supporting a great cause and spreading a great message.”

Hockton said selling in a tourist market will hopefully mean more sales and more benefit to the charity. “It’s unique because they are being sold in tourist areas there are different customers constantly coming and going so there are new people seeing the shirts every day,” explained Hockton. “For example, in Vancouver, a cruise ship comes into port and 3,000 people get off, shop, maybe a Be Nice t-shirt, get back on the ship and sail away. A little while later another ship docks with 3,000 more people.”

Winter items with the Be Nice logo are already in the works including toques, hoodies and long-sleeve t-shirts. Baseball caps are going into production soon too. “Our goal is to be across the country by February next year,” said Hockton.

Be Nice; It’s a simple message that’s having a big impact. 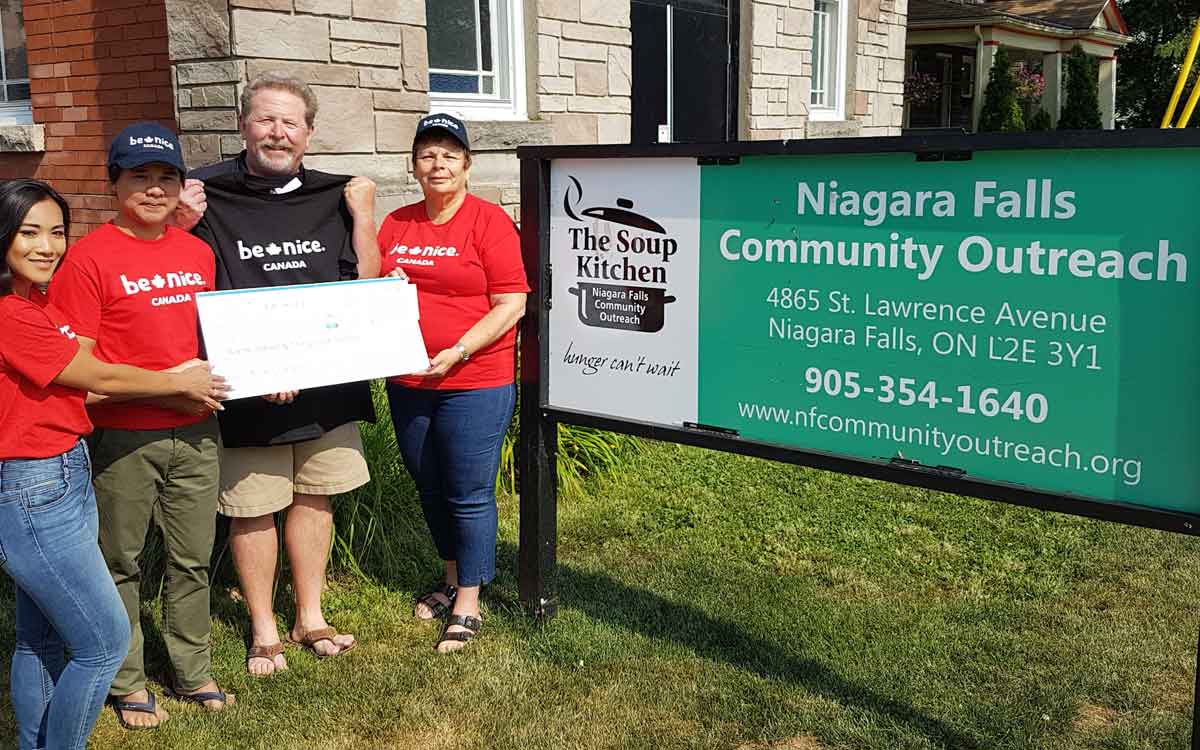