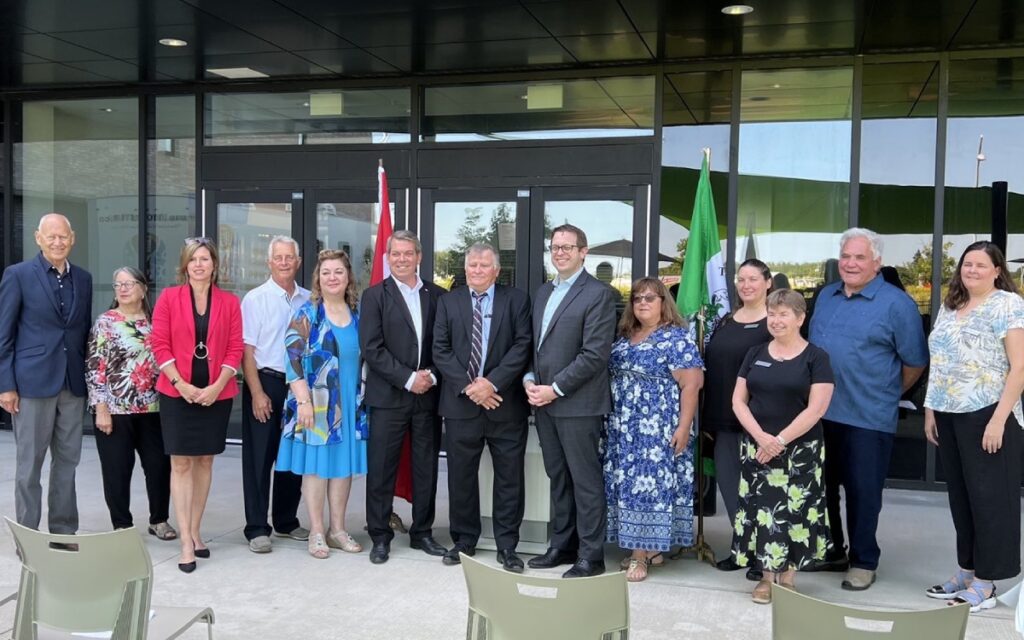 After successfully applying through a competitive intake that closed July 2021, the Town of Pelham has been awarded $5.4 million from the federal government’s Green and Inclusive Community Buildings program to construct a brand-new library.

Dignitaries were on hand at the Meridian Community Centre in Fonthill Friday to announce the funding, near where the new facility will be located.

“This announcement is a great example of what government can do, working in partnership,” said Mayor Marvin Junkin, who is running for a second term as head of Pelham council this October.

“With generous federal support, the Town of Pelham will now be able to replace a facility that while beautiful, has aged badly. The community can look forward to high quality library programming and materials in a comfortable, convenient environment at the MCC (Meridian Community Centre). I think of this as the cherry on top of the sundae that is the MCC. A great day for Pelham.”

The $5.4 million will help support construction of a new 18,000 square foot, three-storey library. The zero-carbon facility will include accessibility features and green energy components, such as solar panels, glazing, and abundant natural lighting.

“Investing in community and recreational infrastructure is essential to creating communities that are welcoming, inclusive, and sustainable,” said Niagara Centre MP Vance Badawey, who was present last week on behalf of federal Minister of Intergovernmental Affairs, Infrastructure and Communities Dominic LeBlanc.

“(This) announcement for the new Pelham library will ensure that all residents have access to a modern facility where they can safely connect and learn for many years to come.”

Once complete, the new facility will replace the old Fonthill branch at 43 Pelham Town Square across from the bandshell.

The Fonthill location is one of four branches in the newly merged Lincoln Pelham Public Library system, which brought together the resources and staff of the Lincoln and Pelham communities’ respective library operations on Apr. 1, 2022.

“We are thrilled at the opportunity to have a new 21st century library that will serve the needs of our community into the future,” said the amalgamated library system’s CEO Julie Andrews. “We will move forward with lots of opportunities for staff and customers to provide input along the way.”

It’s anticipated that the new Fonthill branch will be complete by 2025.

Pelham’s Maple Acre library in downtown Fenwick just underwent a $1 million renovation and expansion project in 2016, reopening to the public in early 2017 with over 3,400 square feet of additional space.

Regional councillor for the town Diana Huson, who was also in attendance for Friday’s announcement, said it was a “very exciting day” for Pelham on Facebook after the event.

“This new facility will be built green friendly with net zero emissions. Very happy news for our community. Can’t wait to see more details on this new facility!”, said Huson, who, like Mayor Junkin, is currently vying for a second term to represent Pelham at the regional level this October.

Provided via Infrastructure Canada, all funding is conditional on the signing of a yet-to-be announced contribution agreement.