Trans Mountain is not a ‘white supremacist’ project 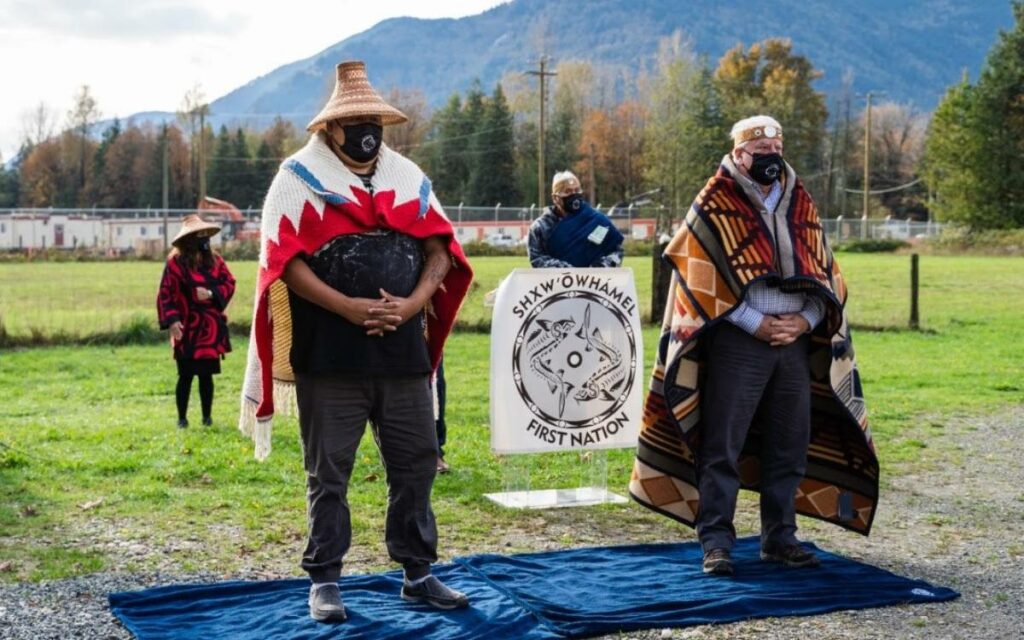 Expansion of the project demonstrates for all to see how Indigenous communities are exercising self-determination. Pictured: Trans Mountain executive participates in a cultural ceremony with the Shxw’ōwhámél First Nation near Hope, B.C. Photo credit: Trans Mountain

Certain environmentalist organizations will say anything to stop certain pipeline projects, even at the expense of Indigenous communities seeking to secure a future through partnerships with energy companies.

Case in point is a recent tweet by 350 Canada against the Trans Mountain expansion project. The Canadian arm of Boston-based 350.org, 350 Canada describes itself as being part of a “international movement of ordinary people standing up to the fossil fuel industry to end the age of fossil fuels.”

In this tweet, the author confidently asserts that, “Trans Mountain was always a white supremacist project.”

This, of course, would be news to the 73 Indigenous groups in Alberta and British Columbia that have signed 66 mutual benefit agreements with the expansion project as of January 2021.

One would also think that white nationalist organizations in Canada would be interested to know that a project that benefits Canadians of all racial and ethnic backgrounds and demonstrates multicultural co-operation is being portrayed as somehow part of their plans.

Of course, nowadays we are seeing certain activists and academics throwing out these ideologically charged jargon words all the time to the point where they lose any meaning.

But the real question is how a project that demonstrates for all to see how Indigenous communities are exercising self-determination is somehow “white supremacist”?

Mutual benefit agreements signed between Indigenous communities and resource companies involve employment and training opportunities for the community, as well as procurement that will employ local Indigenous firms. These are all beneficial to the community and its members.

However, these agreements also represent that resource companies are obligated to approach Indigenous communities, listen to them and address any issues they have. These projects and their protocols flow from the duty to consult and accommodate Indigenous communities that derives from our constitution.

These companies can’t just do whatever they want. They must consult and accommodate the right holders to the affected lands. This is anything but “white supremacist.” These environmentalist organizations are not living in a Canada where Indigenous rights are front and centre.

These projects are exercises in Indigenous economic self-determination that can throw a monkey wrench into the plans of government or resource companies. There are documented examples of Indigenous input affecting hundreds of pipeline route changes. While the duty to consult is not a right of veto, there are some instances where Indigenous interests can be negatively affected enough that they can obstruct or even kill certain projects.

For instance, Suncor Energy recently signed an agreement with eight Indigenous communities from the Fort McMurray Wood Buffalo region (where the Alberta oil sands are located) to buy a 15 per cent stake in the Northern Courier pipeline.

The benefits of the $40-million partnership will be spread out over the eight different First Nation and Metis communities in northern Alberta, which were able to purchase the stake with a loan from the Alberta Indigenous Opportunities Corporation. The funds will allow these communities to protect their culture and their elders and build necessary infrastructure.

Environmentalist activists who live in large urban centres don’t see how their standard of living is built on natural resource wealth because the extraction and production processes are invisible to them in their high rises.

Thus, it is easy for them to throw ideological jargon words like “white supremacist” at a pipeline project like Trans Mountain while ironically ignoring that these projects are assertions of Indigenous rights and title against the mainstream state.

If Canadians are interested in advancing Indigenous rights and self-determination by ensuring that their interests are taken into consideration every time a resource project is contemplated, they will hope for more Indigenous involvement in pipeline projects such as Trans Mountain.