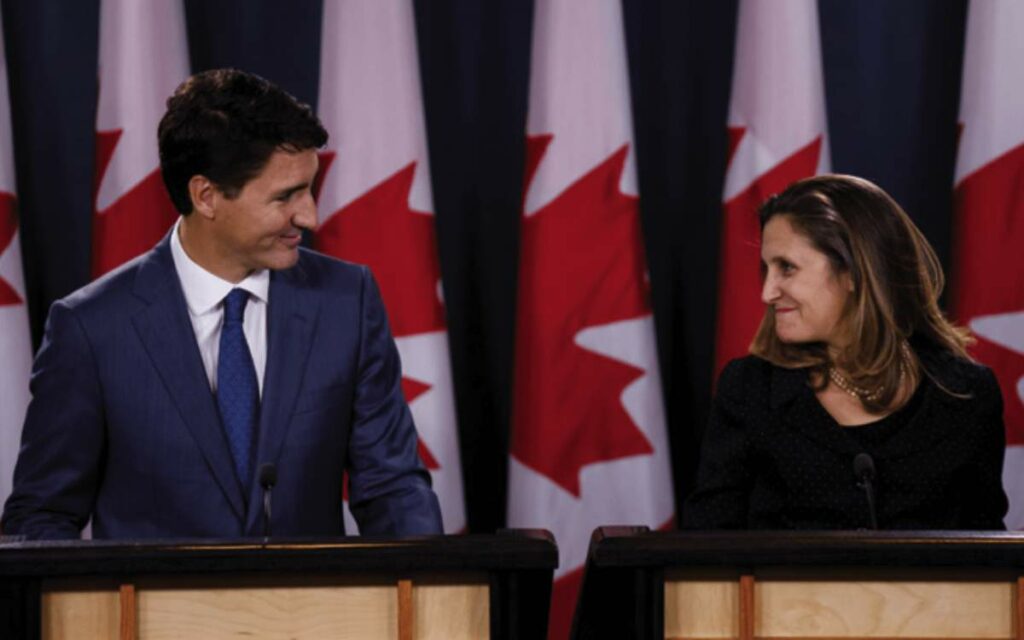 The Liberals’ excess and imprudence is making the country and its citizens increasingly poorer. Photo credit: PMO/Adam Scotti

The enabling legislation for the government’s Fall Economic Statement was before the House of Commons Finance Committee this week. On Monday finance minister Chrystia Freeland waxed on about the government’s new programs and increased spending in support of Canadians. In spite of her enthusiasm for the tax and spend approach the Trudeau government is championing, many in Canada’s financial community are critical of where her fiscal plan will take the country.

In early November the finance minister delivered the government’s fiscal update to its spring budget. Freeland forewarned of tough economic times and a caring government introducing new measures to help Canadians cope. Highlights of the Fall Economic Statement include:

In total the finance minister outlined approximately $11.3 billion in new spending this fiscal year and next, adding to the $11.6 billion of new measures already announced for 2022-23 since her April budget address. That 2022 federal budget announced $31 billion of new government spending over the next five years.

In commenting on the government’s COVID spending and her post-pandemic fiscal plan, Freeland said, “The spending, it was the compassionate thing to do. It was also economically the smart thing to do, and the numbers show it. Once the main COVID emergency was behind us, we moved to a really responsible fiscal path.”

Canadians have accepted the extraordinary expenditures in COVID relief spending in 2020-21 and 2021-22. It is the tens of billions of dollars in new post-pandemic spending, at a time when most financiers are forecasting a downturn in the economy, that is drawing cautionary notes and criticism.

Yves Giroux, the federal parliamentary budget officer, told MPs on the finance committee that the government’s increased spending does not “spell fiscal restraint” nor “keeping one’s powder dry” for future tough times, as Freeland has repeatedly stated. By Giroux’s accounting, since April, the government has earmarked $52.2 billion in new spending in the coming years. Giroux made a special note of $14.2 billion of unspecified spending that is buried in the latest documents.

Giroux’s concern is echoed by others. Economists at the Royal Bank of Canada observed that “program spending in the current fiscal year is the highest in nearly three decades outside of the pandemic” and suggested any government revenue boost should be applied to its bottom line. BMO Capital Markets flagged in a note to its investors that the debt-to-GDP figure Freeland has stated is a guardrail for government is only marginally being reduced with her fiscal plan. Today the debt-to-GDP is 42.3 per cent, well above the pre-pandemic level of 31 per cent.

Conservative leader Pierre Poilievre’s main criticism of finance minister Freeland’s fiscal approach is that it fails to curtail government spending to pre-pandemic levels. Poilievre states: “We did not have to increase government spending by 30 per cent from pre-COVID to present, now, when all of the COVID programs are supposedly lapsed. We didn’t have to have a rate of permanent growth in spending, unrelated to COVID, that has left us in this precarious situation.”

Poilievre is often quoted slamming the Trudeau government’s fiscal approach: “We do not have a finance problem – we have a spending problem.”

The Trudeau government’s continuous, unbridled spending is impacting taxes and the country’s inflation and interest rates. Regarding taxes, Canada has the dubious notoriety of being the only country in the world to have raised taxes during the pandemic. Research compiled by the Canadian Taxpayers Federation reveals that other countries cut consumption taxes, personal income taxes, business taxes, and/or fuel taxes. Meanwhile during the pandemic, the Trudeau government maintained its GST rate, provided no tax relief to individuals or businesses, and it has hiked its carbon tax on pump gas prices and home fuel – and will do so again in 2023.

On Canada’s rising interest rates, both the Bank of Canada Governor Tiff Macklem and Senior Deputy Governor Paul Beaudry have intimated in recent public statements that the federal government stimulus spending (and now its post-pandemic spending) has fueled the country’s inflation and prompted the necessary hike in interest rates. The Bank of Canada’s assessment is that Canadians feel the global inflationary pressures to a greater degree because of the government’s fiscal approach.

Economists John Cochrane and Jon Hartley of Stanford University make a similar observation when analyzing the country’s fiscal record: “The most important source of Canada’s inflation is simple: starting in 2020, the government borrowed more than $700-billion, and mostly handed it out. People spent it, driving up prices… Canada can borrow an immense amount without an impact on the price level if the government has a believable plan for repayment. But the government had gone too far in borrowing and spending, without such a plan.”

And international economist Daniel Lacalle has provided a succinct and sobering explanation of the inevitable outcome: “Every single unit of government spending is paid by you, with more taxes, more inflation, or both. All government excess makes you poorer. The government doesn’t give you free money – it gives you expensive destruction of your options for a better future.”

So, putting Finance Minister Chrystia Freeland’s enthusiasm aside, it is clear the Trudeau government’s fiscal approach is failing Canadians – and we will be sure to pay for this.