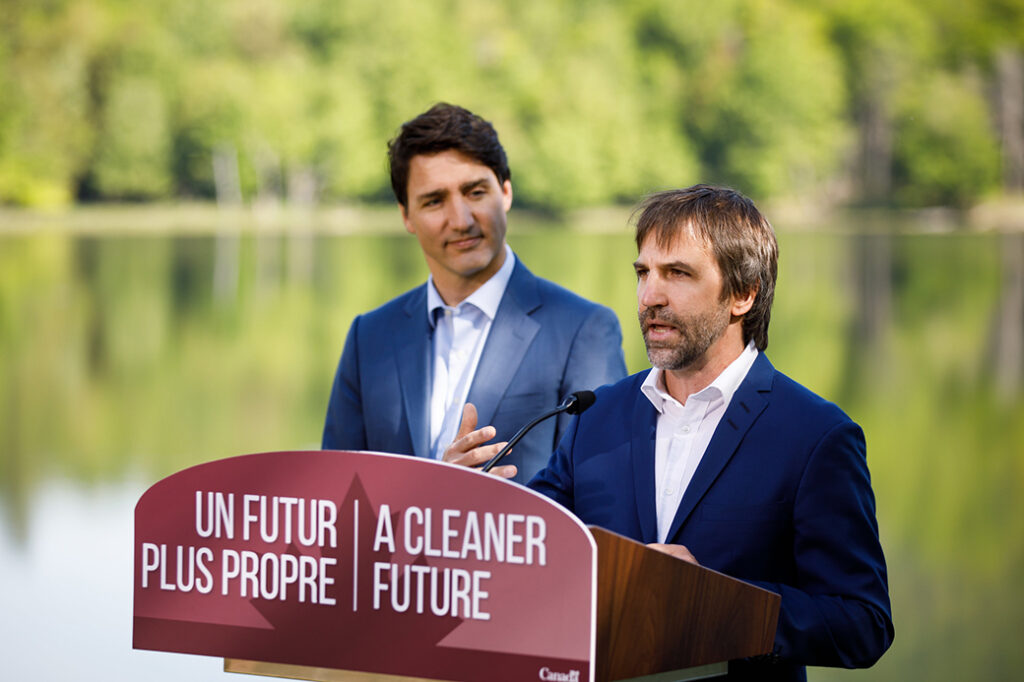 The irony was not lost to many Canadians (and even mainstream media) that Prime Minister Justin Trudeau was jetting across the country to deliver his dire warnings about climate change and how Canadians must do their part. The PM, his Minister of Environment Steven Guilbeault and a cadre of Liberal ministers and MPs spent July sharing the paramount objectives of the Liberal green plan that will get Canada to “net zero” carbon emissions by 2050.

The age-old adage may be “the devil is in the details,” but already there is mounting evidence to conclude the Trudeau government’s green plan is hurting Canadians and failing the global community.

First and foremost, when it comes to being responsible for one’s own carbon footprint, it is hard to reconcile the PM’s July tour that was, in part, to highlight the Liberals’ green plan. Last month the PM spent 20 days in the air flying 26,238 kms aboard CanForce One. His 20 flights took Trudeau from coast to coast, touching down in some locations for only a few hours to plant a tree, gladhand on main street, or visit a local business – and then there were the trips coordinated to include a Liberal fundraising event. What is most noteworthy is Justin Trudeau’s flights in July released nearly 120 metric tonnes of carbon dioxide into the environment (and for comparison, a Canadian’s average annual emissions total is 4.1 tonnes).

PM Trudeau capped his Canadian tour with the revelation that his family would be holidaying in Costa Rica. More irony: the day the PM jetted off for the south, CBC News featured a piece prodding Canadians that we have a moral responsibility to give up personal ownership of vehicles for the good of the planet’s environment.

Central to the Trudeau government’s green plan is a schedule of carbon tax hikes on gas pump prices and home fuel, purposefully designed to raise energy prices and cause a behavioural change in Canadians’ lifestyle habits. The government has proved regimented to their tax hikes; Canada was the only country in the world to hike taxes during the pandemic.

Carbon taxes have raised the price of all goods and services in Canada and, in this way, has contributed to the country’s inflation rate. Yet rising fuel costs, inflation and the financial stress bearing down on Canadians is “good,” as Finance Minister Chrystia Freeland explained at one of her recent tour stops, for it will help speed along Canadians’ transition to green energy choices.

With this rationale, Trudeau and Freeland are soon to double down on taxing Canadians by introducing a second carbon tax, estimated to drive up gas prices 13 cents per litre and cost an additional $220 annually on an average home fuel bill. The government’s own estimates forecast that this new tax will shrink the Canadian economy by $9 billion and the Fraser Institute estimates it will result in the loss of 184,000 jobs. (To paraphrase Freeland: no pain, no gain.)

The Trudeau government’s emissions reduction plans have adversely impacted domestic and foreign investment in the country’s natural resource industries, most strikingly the oil and gas sector. The regulatory straight jacket placed on all resource development projects – new mines, oil and gas projects, and pipelines – has had serious repercussions in Canada as well as beyond our borders. The most recent case in point is how Canada responded to the call for energy resources from Germany.

Europe is in the grips of an energy crisis brought about with the Russian invasion of Ukraine and Putin’s threats of turning off the flow of natural gas to Europe this winter. Germany turned to Canada to request liquified natural gas (LNG) exports. Though Canada is one of the world’s largest producers of natural gas, the country currently has no capacity to export gas anywhere other than the U.S. So, Canada was unable to assist with the requested LNG exports. Instead, PM Trudeau made a closed-door promise with Germany that would have Canada break with the solidarity of the international community and violate our country’s own sanctions against Putin. Trudeau promised to return a gas turbine to Russia so Putin could then export his gas.

On a related matter concerning the development of LNG export facilities in Canada, this week Enbridge CEO Al Monaco stated the Trudeau government needs to “get out of our own way when it comes to energy and building infrastructure… We need a sense of urgency and clarity around regulatory and permitting certainty to make sure we attract capital.” Monaco is quoted in the Globe and Mail to say that this is important for Canada and the world: “Our ability to export low-emission natural gas can have a massive impact on global emissions.”

Still, the Trudeau government’s zeal for its environmental objectives remains unyielding. Steven Guilbeault continues to suggest options for Ottawa’s Emissions Reduction Plan, which is to cut oil and gas emissions by more than 40 per cent by 2030, and emissions from electricity generation by almost 80 per cent. With the government’s heightened rhetoric about Canadians doing their part for the existential global climate challenge, the government’s green plan has effectively put a chill on all Canadian energy projects.

Canada’s former Finance Minister Joe Oliver summed up the government’s green plan with this frank assessment: “Trudeau’s fixation has become an obsession. His preoccupation with a climate emergency has morphed into a moral, quasi-religious imperative that tolerates no dissent and justifies policies, irrespective of their harm to Canadians and people around the world.”

This places the Canadian energy sector on the sidelines – at a time when international bodies would welcome Canadian resources. Consider what is happening in the world:

Fatih Birol, the executive director of the International Energy Agency, assessed the current global energy requirements, “We will still need oil and gas for years to come. I prefer that oil is produced by countries… like Canada who want to reduce the emissions of oil and gas.”

With respect specifically to China, former Canadian envoy to Indonesia, Malaysia and Pakistan Randolph Mank, suggests Canada could make a significant contribution on geo-environmental issues if they were to change tact and encourage development of LNG facilities. Mank stated, “We account for 1.5 to 1.7 per cent of global emissions, and China is 30 per cent. So it would seem a natural way to contribute to the global effort to reduce emissions.”

However, this type of international contribution would require the Trudeau government, as Al Monaco put it “to get out of the way”; something that will not occur as Freeland introduces the Liberal’s new carbon taxes and Guilbeault details his Emissions Reduction Plan.