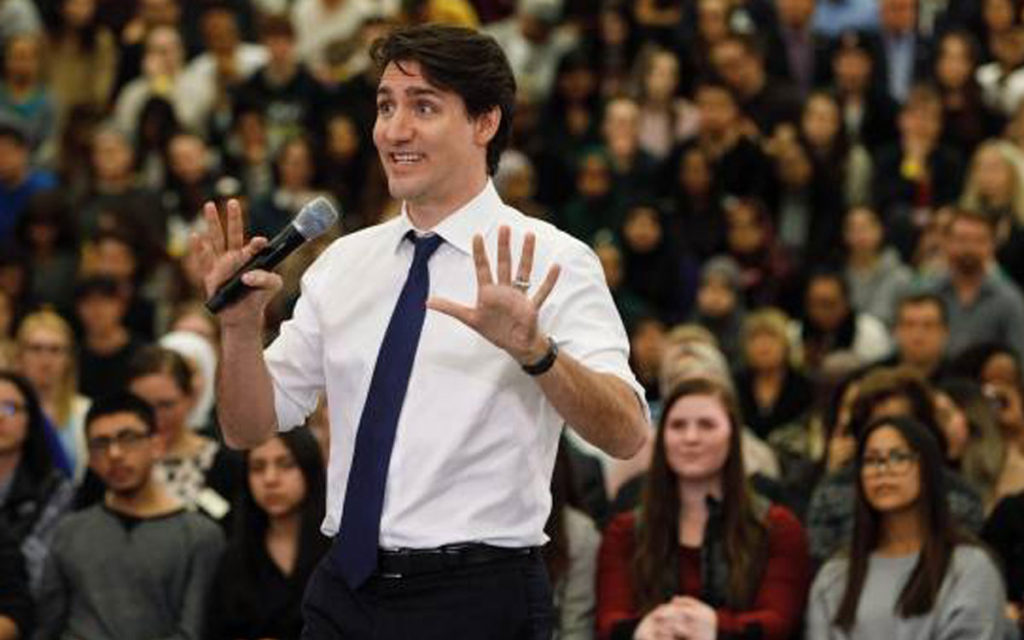 For the longest time in Canadian politics, Justin Trudeau ascending to the office of Prime Minister just seemed to be a fait accompli.  Name, looks, aura – all pointed to it.

From the time he eulogized his late father during a nationally covered address, Liberals spoke about Trudeau Junior as their Great Hope.  He became an MP narrowly winning in his own riding.  Then he won the Liberal leadership with over 80% of Liberal party members’ vote.  Even when he ran as Liberal leader in the 2015 general election, Harper and the Tories offered up little resistance to the inevitable ascendancy of Trudeau and the Liberal party.  After winning the majority in October 2015, the expected Trudeaumania in full force, even Tories talked about him being at least a two-term Prime Minister.

During the 2015 election many women, politicos on the left and mainstream media, fell for the former drama teachers’ performance.  The selfies, the hand on the heart (his version of Clinton’s biting his bottom lip), the political correctness gone mad at a time that political correctness was hitting its high point – and the stronger and stronger performances in debates and in public against a supposed superior debater in Harper – who just seemed tired and ready to give in – led to Trudeau’s landslide victory.

So it’s shocking for many Canadians to see how quickly his popularity, and that of the Liberal party, has faltered.  While it was apparent long ago to his political opponents that he was an actor playing a role – a Peter Pan living up to the Canadian fantasy of seeing the son fill his late Father’s shoes – it wasn’t readily apparent to mainstream media and of course his supporters.

But the demise appears to clearly be underway.  A March of 2018 Angus Reid poll put the federal party standings at 40% Conservative; 31% Liberal; 19% NDP and 8% Green Party.  Quite a change from the same polling firms number of June 2017 findings of 38% Liberal, 34% CPC.

The same March 2018 poll saw 51% agree that ‘it’s time for a change in government’ while only 28 % disagreed with that.  In September of 2016 the numbers were almost exactly the reverse.  And Angus isn’t alone in their findings. Pollsters like Forum and Ipsos are tracking similar declines.

What is the cause of these low Liberal numbers?  Without doubt it’s that people have tired of the Boy Wonder himself.  In March of 2017 54% approved of Trudeau and only 41% disapproved – a net favourable of plus 13%.  In March of 2018 these numbers had reversed so that 56% of Canadians disapprove of Trudeau and only 40% now say they approve – a net unfavourable of -16%.  For comparison, American pollsters had Donald Trump at 47% approve, 52% disapprove – a net unfavourable of -5% around the same time. 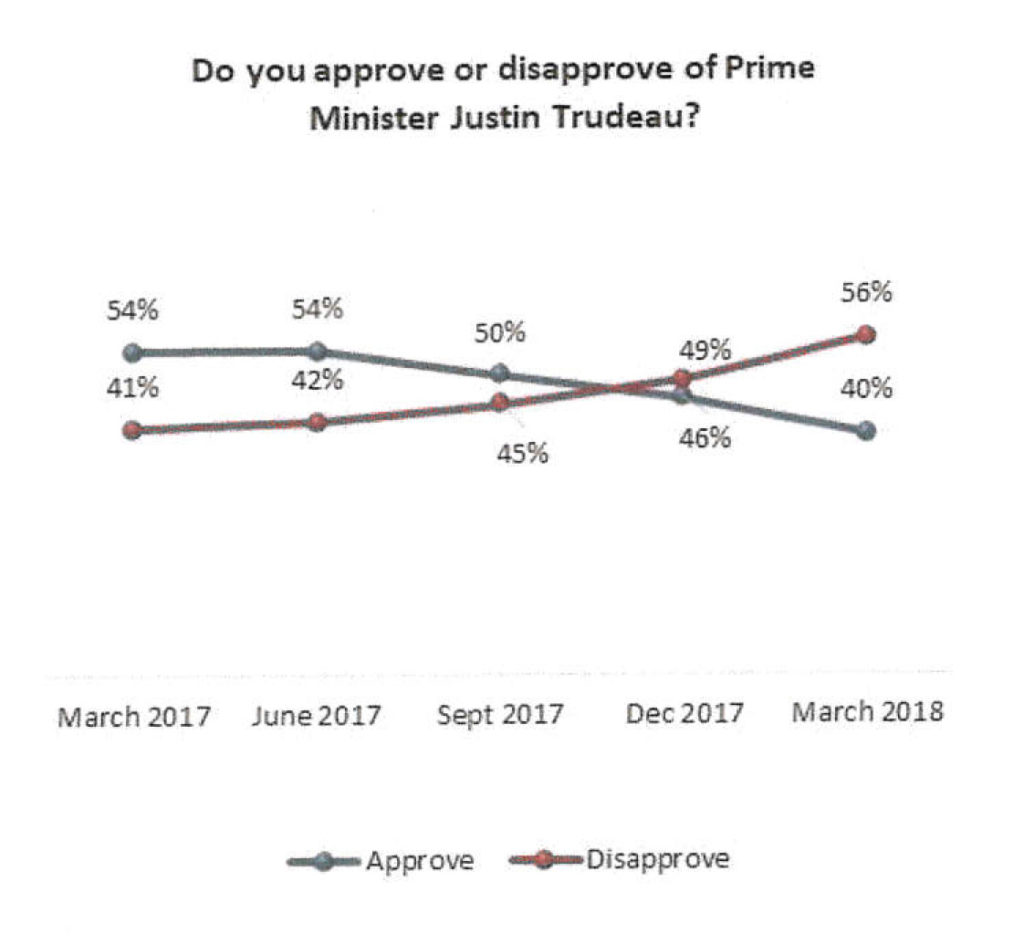 If one charts Trudeau’s decline in favourability and his party’s fortunes it is no surprise they coincide.  His own foibles of the last year and a half also mark declines in his standing.  He peaks in popularity a year after election – a long post-election honeymoon as he spreads money around the country along with copious selfies.  Many in the media continue to swoon.

But the act grew tired in 2017.  In early July, Trudeau paid out confessed terrorist Omar Khadr $10.5 million to settle his lawsuit alleging Canada failed to protect his rights.  Later that month his finance Minister introduced a tax reform package to close ‘loopholes’ that small businesses were ‘taking advantage of’.  Trudeau said he would ‘not make apologies’ for this attack.  To an international audience in Davos he said, “Too many corporations have put the pursuit of profit before the wellbeing of their workers. All the while, companies avoid taxes and boast record profits…”.

Consultations on the plan were to be held for 75 days over the summer – when the general public isn’t paying attention.  But the usually exalted, risk taking, job creating small business sector, including many farmers and doctors, fought back with over 21,000 submissions.  Even Trudeau’s caucus asked him to rethink the plan.  At the same time, Finance Minister Morneau came under fire for continuing to own shares of his company and other assets without putting them in the required blind trust.  An automatic for Canadian Provincial and Federal Ministers – particularly shocking when the rule was ignored by the Federal Finance Minister.

Throughout 2017 Trudeau was up against the terrible optics of his family and his entourages’ trip to the Bahamas where he stayed with billionaire and registered lobbyist the Aga Khan.  When first confronted with accepting the free trip in December 2016, a year in which the Liberals gave the Aga Khan’s foundation almost $50 million, Trudeau deflected by saying he was visiting with a close family friend.  The issue culminated with the federal Integrity Commissioner ruling in December 2017 that Trudeau indeed violated four provisions of the conflict of interest act.  She also revealed that Trudeau and his wife actually visited three times since he became Liberal leader – yet hadn’t spoken to Aga Khan since Trudeau was a child, apparently rekindling the friendship only after he became party leader.

Now 2018 has seen Trudeau lose favour not just in Canada but on the international stage as well.  He was widely mocked for correcting a lady at a Town Hall for using the word ‘mankind’. Trudeau told her ‘person-kind’ is the preferred term.  The mockery was so loud that the Liberals had to say it was just his idea of a joke.  The obviously dishonest explanation made the matter worse.

This was followed by Trudeau, his family and another large entourage of Liberal backers (one of which was former would be assassin Jag Atwal), vacationing in India for a week – with only one two-hour official visit planned.  India turned their back on Trudeau from the start, ignoring him largely and then having their jaws drop to the floor when he and his family continually paraded about the country in what amounted to traditional wedding attire.

There are 18 months before the next federal election so one wonders if the former two-term shoe-in doesn’t have time to recover.  But it now seems like many of his supporters have caught on to the act.  If Peter Pan doesn’t leave Neverland soon, it may be too late.