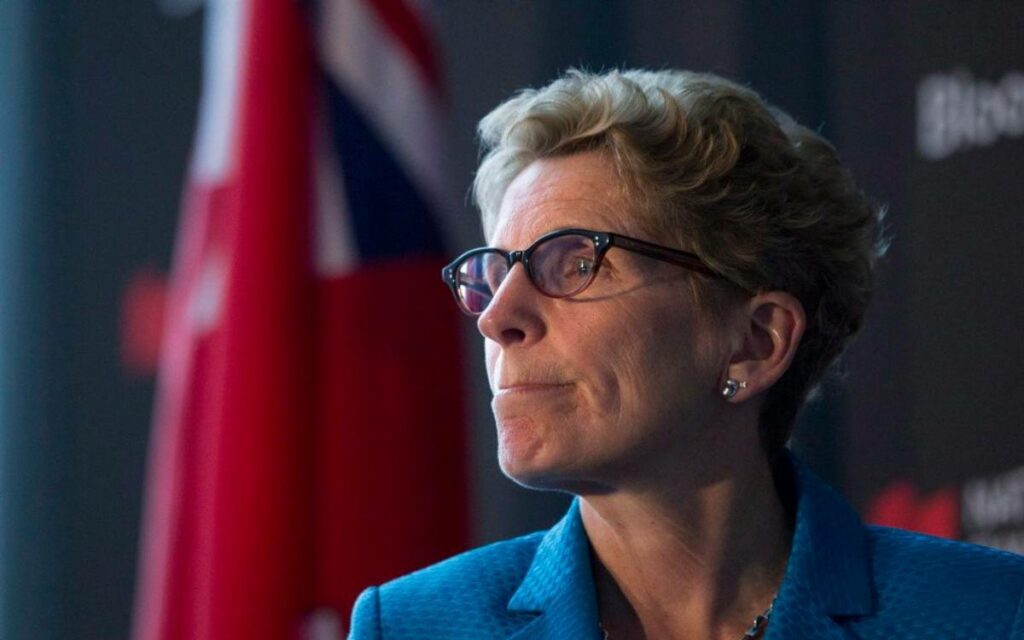 Former head of the provincial Liberal Party and Premier of Ontario from 2013 to 2018 Kathleen Wynne. Photo credit: The Canadian Press/Chris Young

Perhaps the COVID vaccines have a little bit of truth serum in them, as some painful truths are finally emerging from various quarters.

One of the more recent instances involved former Ontario Premier Kathleen Wynne who, in an interview with Maclean’s magazine, conceded that she did not listen well enough when people warned her that the Green Energy Act (GEA) policies were going to increase hydro rates significantly. At that time, even experts that had been hired on the taxpayers’ dime by the Liberal government had warned their policies of paying enormously high rates for the generation of wind and solar power would dramatically increase hydro costs, so Wynne must have been especially tone-deaf to have missed that.

Analyses of the GEA have repeatedly shown that any benefits achieved for the environment could have been accomplished at a fraction of the billions of dollars in excess costs imposed on taxpayers and hydro ratepayers. Ontario Auditor-General Bonnie Lysyk reported in 2015 that Ontarians had paid an extra $37 billion more for electricity from 2006-2014 because of this policy, and estimated that an additional $133 billion would be paid by 2032. The GEA also had a powerful negative impact on Ontario’s economy as it drove away many manufacturers and reduced the province’s competitiveness relative to other jurisdictions.

Wynne’s admission also speaks to the importance of having people with diverse backgrounds and experiences in government. Wynne’s pre-politics career was largely spent in various parts of the public education system, both as a teacher and a trustee at the Toronto District School Board, where budgets are routinely ignored and a left-wing philosophy permeates the highly unionized institutions involved. Mind you, Wynne’s apology was for not listening to advice and if that is your practice it likely doesn’t matter how varied the experience of your colleagues and advisors may be.

Many observers would comment that Wynne had lots more to apologize for than just hydro prices, and they wouldn’t be wrong. The ridiculous increases in spending on the public education system that burdened taxpayers yet did nothing to improve student outcomes, the union-driven punitive labour legislation that seriously damaged the small- and medium-sized business community and the sleight of hand played with the province’s finances to pretend they were achieving budgetary balance when the truth was quite the reverse are but a few examples.

Governments of all political stripes love to talk about their adherence to “evident-based policy”, yet in practice they are much more likely to sway with the prevailing trends of the day and their own ideological biases regardless of the facts. This is especially true in current times when our communication capabilities are instantaneous and tools like social media can whip up a firestorm – rightly or wrongly – at a moment’s notice.

It may be a good thing that Wynne finally admitted she messed up in a big way because her ideological blinkers prevented her from hearing some unwelcome facts, but the reality is all Ontario citizens have been punished significantly for her shortcomings by unnecessarily high hydro costs that continue to this day and show little sign of letting up in future. Considering that so many other jurisdictions are following the same ruinous path on energy policy, including the Canadian federal government, it is a cautionary tale that should be a wake-up call for voters.

I suppose we should commend Kathleen Wynne for ultimately admitting her mistake, something that most politicians never do. It might also be nice if politicians could be so forthcoming while in office when it actually matters.