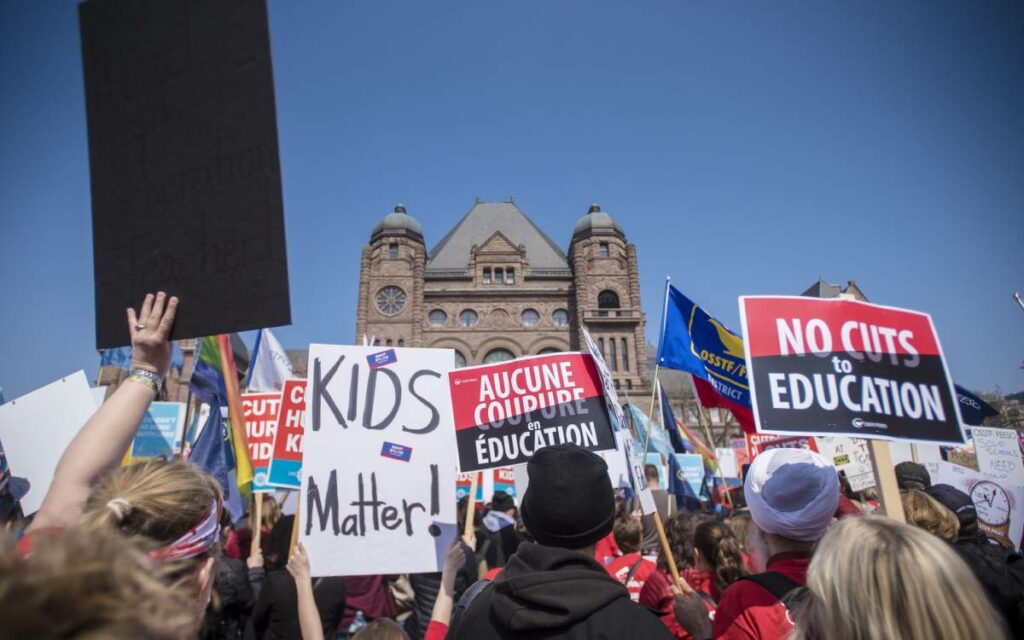 For many years and throughout the pandemic to date, some of the most vocal and constant complainers could be found in the teachers’ unions. These unions have claimed incessantly that horrible cuts to education spending were underway and must be stopped. This union behaviour was especially prevalent in Ontario, which likely has the most militant teachers’ unions in the country, but was taking place in other provinces as well.

In Ontario, in recent years it has not been unusual to see homes with signs on their lawns saying such things as “Stop the Cuts to Education” and other similar messages. These activities have been stepped up since the PC Ford government was elected, although the teachers’ unions have a reputation of always claiming they are being shortchanged no matter which political party is in power. It is easy to understand why many people believe that there actually have been cuts to the education budget that have been going on for some time.

The facts, however, show that the exact opposite is taking place. A study by the Fraser Institute entitled Education Spending in Canada, Fall 2021 looked at changes in spending on education in each province from 2014-15 to 2018-19. The data overwhelmingly show that education spending increased in Canada significantly during this period, and increased more than was necessary to account for increases in enrolment and inflation.

Public school enrolment grew by 3.2 per cent nationally during these years, with the largest increases in Alberta and Saskatchewan. Newfoundland and Labrador and New Brunswick were the only two provinces that saw reduced enrolment. After taking inflation and enrolment considerations out of the mix, spending per student increased by 2.6 per cent nationwide during the period studied. Several provinces greatly exceeded this average, with the largest increases in Nova Scotia (9.2 per cent), Quebec (7.3 per cent) and PEI (5.1 per cent). In Ontario, where the unions were especially vocal about the supposed spending “cuts”, the increase was 2.8 per cent.

Increases in education spending can be allocated in a number of different ways – to capital improvements or new facilities, more classroom resources or compensation and benefit increases for teachers and other education workers. Most observers will not be surprised to learn that most of the increased spending on education went to compensation and benefits hikes for teachers and other education workers, above and beyond inflation. Compensation increased by 13 per cent on average across Canada during the period studied, with salaries and wages accounting for just under 80 per cent of the overall compensation increase. Fringe benefits increased by just under 19 per cent during the period, and pension costs also registered substantial growth.

The fact that most Canadians do not enjoy the generous salaries, benefits and pensions of teachers, yet pay for them, makes these increases particularly galling, especially as the unions constantly claim that spending is declining. The compensation increases would also be easier to swallow if educational outcomes were improving in tandem. Unfortunately, the ongoing increases in compensation and benefits to teachers have largely not been accompanied by better student achievement. In fact, and notably in Ontario, student test scores in such key areas as math and literacy have been falling while teacher compensation continues to increase. The Fraser Institute analysis shows once again that students, families and taxpayers in general are not receiving value for money in our expensive public school system.

The protests of unions, and especially public sector unions, should be taken with many grains of salt at the best of times, considering that their overarching goal is always to get their hands deeper into taxpayer pockets and use whatever misleading or downright dishonest information possible to further their goals. Considering the dire financial constraints of all governments at present, it is especially important that the facts get out there to contradict the dishonest narrative put forward by the unions, who will surely not stop asking taxpayers for ever more money despite the fiscal cupboard being bare.

It must get awfully warm in those union halls with their pants perpetually on fire.