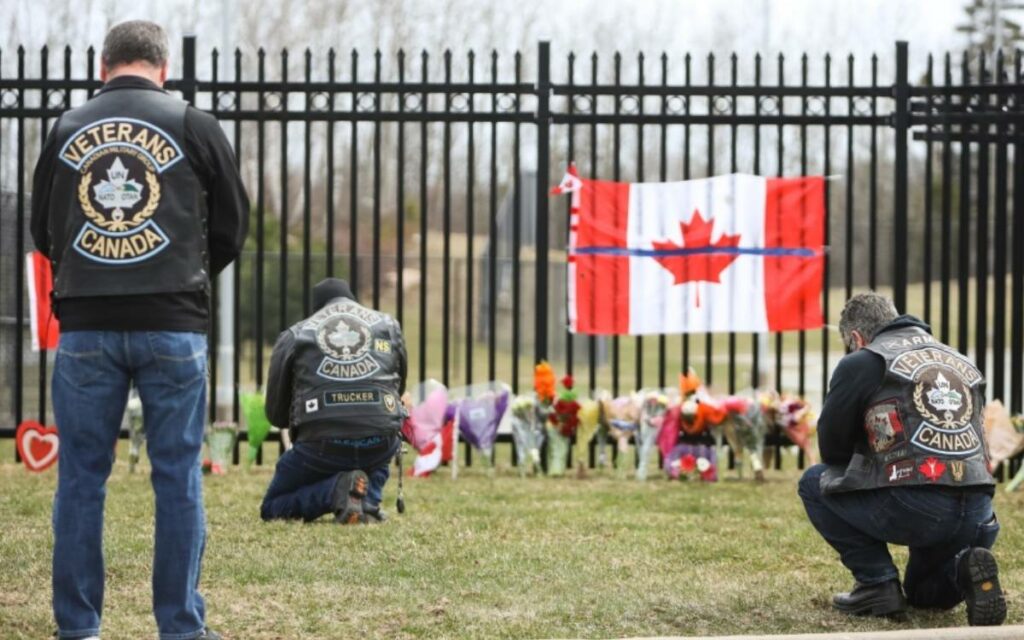 Locals kneel before a make-shift memorial in honour of Constable Heidi Stevenson in Dartmouth, Nova Scotia, April 20, 2020. This weekend marked the one-year anniversary of the massacre that saw Constable Stevenson and 22 others in Nova Scotia murdered in cold blood. Photo credit: The Canadian Press / Riley Smith

The one-year anniversary of the horrific mass murder in Nova Scotia took place this past weekend and reminds us all of how poorly victims of crime are treated in Canada. Few Canadians are aware that Canada is seriously out of step with other developed countries with respect to our treatment of victims of crime. Virtually all other Western nations have well-established regimes of legal rights for victims, fair and equitable rules around compensation and support for things such as mental health treatment. In Canada, victims are treated inconsistently, if at all, with compensation awarded randomly at the whim of the government of the day. Victims are frequently completely left out of the equation when it comes to consideration of their rights. It is Canada’s shame that the perpetrators of crime routinely receive better treatment, more supportive resources, and superior monetary compensation than do innocent victims.

Canadians are victimized in over two million incidents of violent crime every year. Victims are often re-traumatized by a criminal justice system that does not inform them of their rights, criminal justice processes, important timelines to participate in the process and resources available to them.

Being a victim of a crime can manifest itself in many different ways. It could involve a crime against an individual such as an assault, a robbery or a murder; it could involve fraud, or it could be an international crime, such as 9/11 or the downing of the Ukrainian airplane in Iran in January 2020 that killed many Canadians. It could also be an event such as the Nova Scotia mass murder last year. Victims can occur in a variety of ways, but they have one thing in common – they are all innocent of what happened to them and they deserve proper treatment, support, and compensation. In the absence of a sensible federal policy regarding victims’ rights, the provinces have been left to their own devices, which leads to victims not being treated fairly or consistently across Canada.

Another serious problem concerns the fact that Canadians who are victims of a crime that happens within Canada are treated very differently from those involved when a crime takes place outside of Canada. The Victims’ Bill of Rights defines a victim as someone who “has experienced emotional or physical harm as the result of a crime committed in Canada”. Yet many Canadian victims suffer from crimes committed in other countries, such as 9/11 or the Iranian airline disaster. There are no provisions under Canadian law for reparations for these people as there are in other nations, and there should be.

Previous governments have been sufficiently shamed by Canada’s shoddy treatment of victims in the past that they established a federal Ombudsman for victims of crime, but the Ombudsman is not empowered to make changes, it can merely make suggestion to the government of the day. This means the Ombudsman position is effectively a figurehead. Canada also has the aforementioned Victims’ Bill of Rights, but it is essentially toothless because it cannot impose remedies when victims’ rights are violated. Conservative federal governments have generally been more responsive than Liberal governments to the need to enshrine laws to establish the treatment of victims, but they have not gone anywhere near far enough.

There is currently a review underway of the existing legislation, but there is no indication to date that the issue is being taken seriously by the Trudeau government and that improvement is on the horizon.  For instance, in the horrific Nova Scotia mass murder, the federal Liberal government resisted launching a full public inquiry into what happened until the pressure from victims and Canadians in general became overwhelming and a political embarrassment. And to this day, it does not appear that much has progressed on this inquiry into the deadliest mass shooting in Canadian history. On the recent anniversary of this tragedy, families of the victims and other Canadians noted the poor progress of the public inquiry launched last October.

The issue of victims’ rights is rarely a top policy priority for governments since most Canadians are fortunately not in the position of being a victim. Most Canadians continue to believe that bad things only happen to “someone else”, and therefore do not demand action from government. But everyone has the potential to become a victim at some future time and should demand that this neglect of an important issue be addressed.

If you are concerned about this unfairness – and every Canadian should be – you can sign the House of Commons petition for better treatment of victims’ issues at: https://petitions.ourcommons.ca/en/Petition/Details?Petition=e-3307