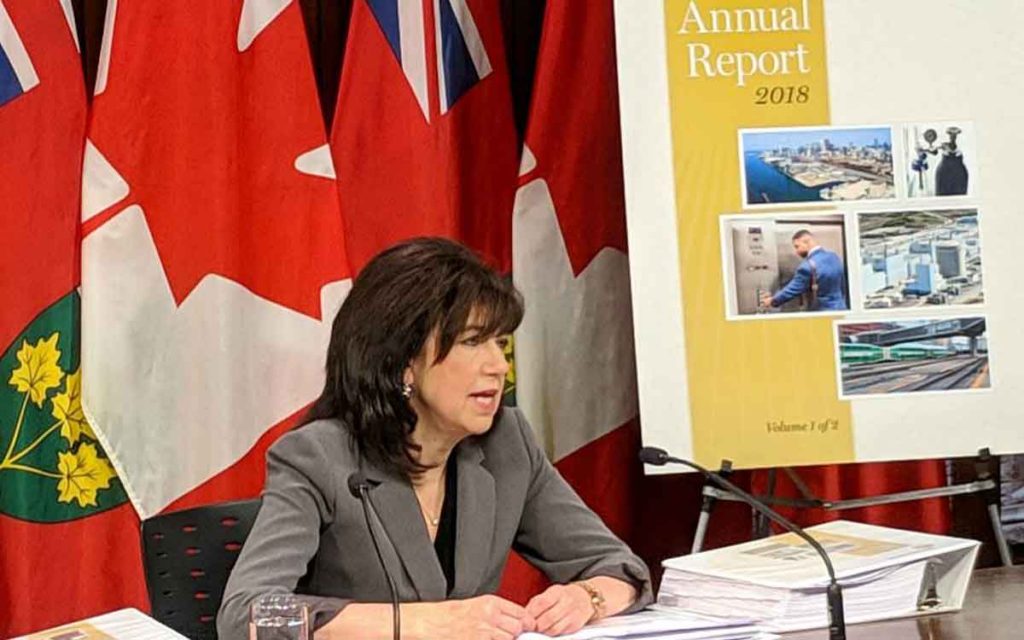 This week’s report of the Auditor General (AG) is likely the last one that will be welcomed by the Ford government for some time to come.  Ontario is blessed with a very competent and thorough AG in Bonnie Lysyk, and she once again identified a number of areas of wasteful or ineffective spending that at this juncture can be laid at the feet of the previous Liberal government.  Going forward, annual Ontario AG reports will be identifying government waste on the Ford government’s watch, so they should enjoy the moment while they still can.

This year, the AG identified widespread problems in many different areas of government activity.  This quote from Ms. Lysyk is telling: “A central finding in almost all of the audits this year was that spending of public monies did not consistently result in the cost-effective achievement of anticipated program benefits, or the proactive addressing of program risks”. This is auditor-speak for “the government wasted a ton of your money this year, with no accountability or even concern about the funds being spent usefully, and without putting systems in place to ensure the waste does not continue in future”.

There were a number of different areas specifically targeted by the AG for special mention. One was spending on Ontario Works, the key welfare program in the province.  Lysyk found that spending had sky rocketed by about 25 per cent since 2009, with $730 million in overpayments to recipients that had not been collected and for which no measurement is in place to prevent such overpayments in future.  Despite this growth in spending, the program results were abysmal in helping get people off welfare and into gainful employment.  In addition, the length of time for which people received welfare payments almost doubled since 2009.  And this was taking place during a period when the economy was growing and employment opportunities were expanding.

The perennially dysfunctional transit authority Metrolinx was singled out for its wasteful spending of about half a billion dollars in unnecessary cost overruns.  Metrolinx was also found to have been subject to political meddling in the location of GO transit stations.  Kathleen Wynne’s “free” post-secondary tuition scheme was identified as having cost about 50 per cent more than initially estimated, and accomplishing very little of its so-called objective of assisting low-income students to undertake college or university programs. Another agency noted for not doing its job was the Technical Standards and Safety Authority (TSSA).  The TSSA is supposed to protect public safety in a number of areas, but the AG found for instance the frightening reality that the vast majority of elevators in the province do not meet safety standards. It seems that the TSSA is yet another government agency that never fails to collect its excessive fees, in this case from businesses, yet provides minimal if any value for the fees collected.

The common denominators of the many programs and agencies highlighted in the AG report include a lack of measurement and reporting mechanisms on program results and a lack of accountability for failure.  It is virtually unheard of that the executives or bureaucrats responsible for wasting taxpayer dollars or failing to achieve the desired results of programs are held accountable for failure.  Indeed, they often end up promoted to even more senior positions despite their past performance.  As long as that environment prevails in government, we will continue to see depressing AG reports as we saw this week.

Whenever any politician or lobby group states that government needs more of your money, they must be referred to any report of any Auditor General in Canada.  As governments continue to waste so much of our hard-earned money year after year, they merely prove that they don’t deserve one more cent.  In fact, with reports like this, Premier Ford’s much-criticized claims of being able to find billions of dollars in waste become more and more credible.  If he is successful in rooting out the waste that so clearly exists, he may actually welcome future AG reports as they document such success.