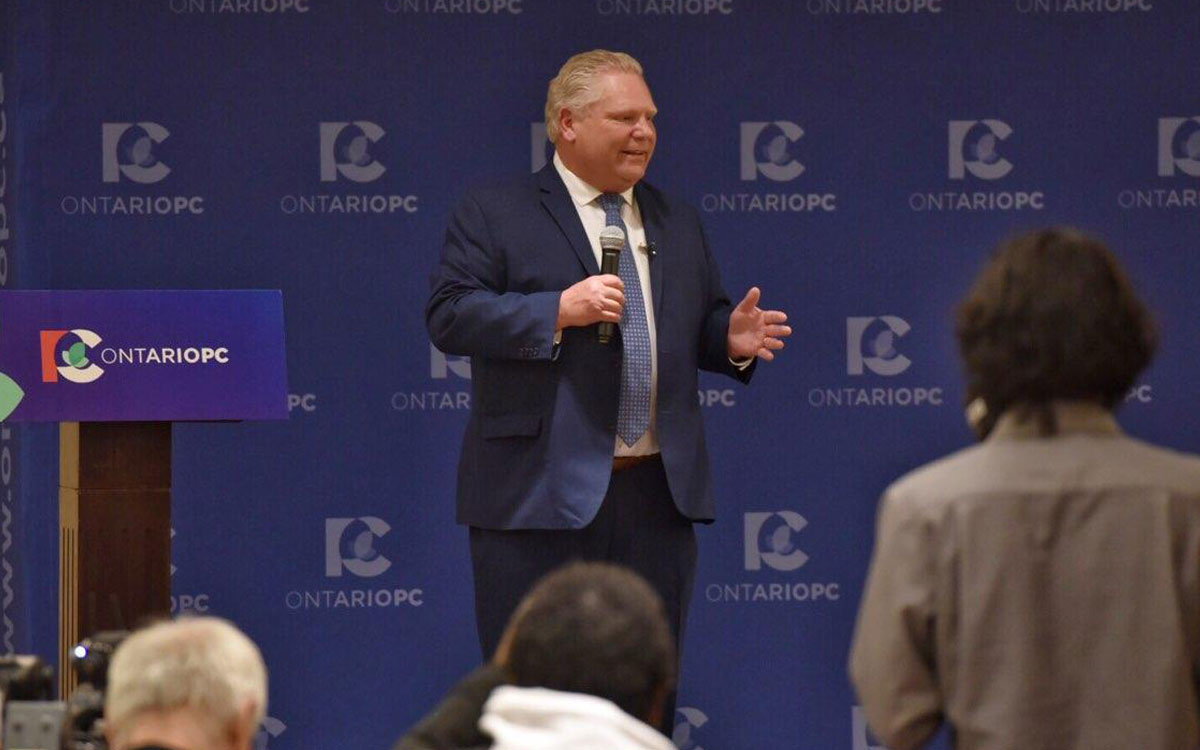 With Rocky theme song Eye of the Tiger pumping out of the ballroom speakers, Ontario PC Party leader Doug Ford took to the stage to a thunderous applause Wednesday night from more than 400 supporters. The entrance fit Ford’s boisterous and man-of-the-people personality. A rousing standing ovation greeted the former Toronto City councillor turned Ontario premier hopeful. He wasted no time firing up the party faithful.

Ford was at M.T. Bellies in Welland earlier in the afternoon and met with local business leaders at the Greater Niagara Chamber of Commerce prior to his arrival at the Holiday Inn on Ontario Street in St. Catharines. He was introduced to the enthusiastic crowd by Niagara West-Glanbrook MPP, Sam Oosterhoff.

Ford wasted little time going after Kathleen Wynne and the Liberal party, giving one example after another of corruption and wasteful spending. He dismissed the Liberal’s recently unveiled budget saying it was pathetic attempt to buy votes. Ford said when he watched the spending announcements from the Liberal government he felt like he was watching the old Oprah show when she would say, “you get a car, you get a car, you get a car!” He also accused the Liberals of handing soul-sourced contracts to Liberal “insiders” and blamed the excessively high hydro rates as one of the major causes of Ontario losing hundreds of thousands of manufacturing jobs.

Not surprisingly he spent a good chunk of his speech discussing healthcare which always becomes a top election issue. He said if elected, his PC government would increase healthcare services and decrease wait times using the same budget that exists today. “It’s not about cuts,” he explained. Ford told the audience that he would assemble a large group of Ontario physicians and let them submit a plan on how to improve healthcare.

Predictably, excessive hydro rates was a hot topic and elicited chants of “shame, shame” from those in attendance. He pointed out that while the people of Ontario struggle to pay their monthly hydro bills, the CEO of Hydro One makes more than $6 million a year while the CEO of Hydro-Quebec makes $400,000.

Probably the biggest reaction from the crowed, a combination of cheers and laughter, came when Ford explained his version of cap and trade. “I will cap taxes and trade Wynne,” he quipped.

Niagara Falls riding PC candidate Chuck McShane was in attendance along with Niagara Centre Riding candidate April Jeffs. McShane liked the way his leader spoke in a very matter-of-fact style that people can relate to. “It was a great evening and great energy in the room,” said McShane. “I think our leader has a very honest message about hope and prosperity that the people of Ontario and especially in Niagara are longing for.”

Jeffs was with Ford in Welland where he went table to table discussing the issues with patrons. “I was very impressed with how he can relate to the hard working people of Niagara who just want honest answers from their political leaders,” Jeffs said. “People were really captivated and engaged with Doug.”

Ford continues his tour of the province in advance of the writ dropping for the scheduled June 7 election.

By Kevin Vallier Time To Read: 2 min
Provincial Old White Folks Need Not Apply – Or Vote
Sports Ice Dogs off to Round 2 in OHL playoff action in b…