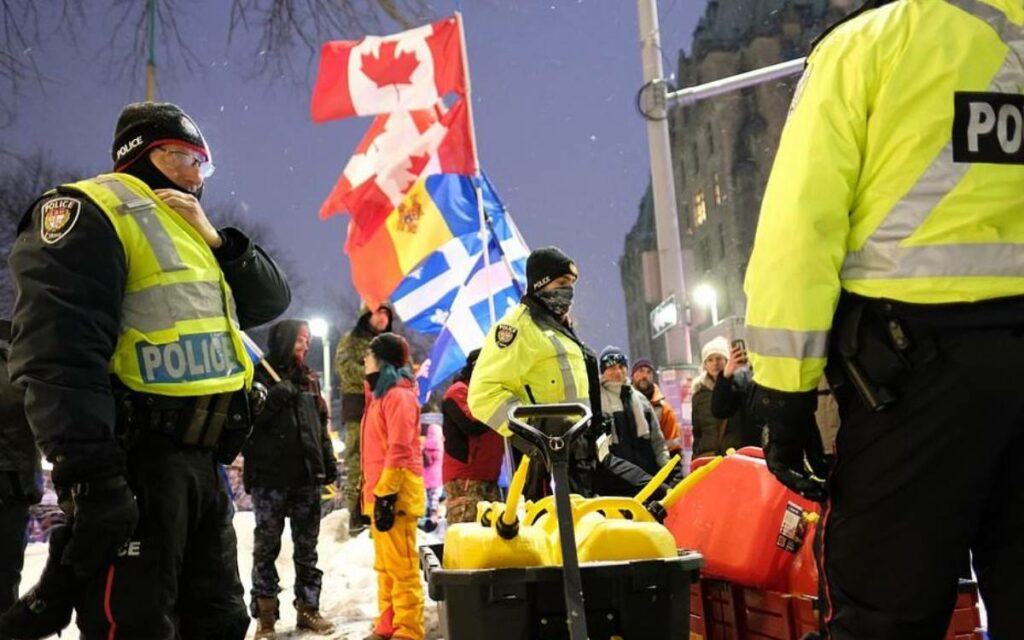 It’s been nearly two weeks since the ‘Freedom Convoy’ rolled into the nation’s capital and took up position around Parliament Hill. And despite an accumulation of bad press from the legacy media, an increasingly discontented local population, threats of arrest, and frigid temperatures, Niagara organizer Harold Jonker said people are only getting “more enthusiastic as the days go by.”

“It’s been phenomenal, it’s been beautiful,” Jonker told The Niagara Independent in an interview from Ottawa Monday morning. “The more people come up and give hugs to the truckers, give high-fives, tell you you’re doing a great job, it just hardens your resolve. We’re not going anywhere.”

Jonker, owner of Jonker Trucking Inc. in West Lincoln – where he also serves as town councillor – said the entire demonstration has been almost wholly “peaceful” and “well-received”, despite the legacy media and countless left-of-centre politicians trying to drive a narrative of chaos and hostility.

“It’s unbelievable – the lies,” said Jonker in reference to coverage from outlets like the CBC. “Canadians: come here and see the truth.”

What started as a protest of the federal government’s vaccination requirements for cross-border truck drivers has turned into a general anti-mandate, anti-lockdown demonstration of everyday Canadians – regardless of vaccination status – fed up with government overreach.

The movement has spread across the country, motivating splinter demonstrations in places like Winnipeg and Toronto.

Locally, this past weekend supporters rolled through Niagara, attracting hundreds of vehicles and roadside admirers as they made their way through several communities, including Grimsby, Niagara Falls, Niagara-on-the-Lake, and Welland.

“The support of the Canadian people has been second-to-none,” said Jonker. “And from the Niagara Region, it’s been amazing. They’ve sent up hundreds of cards (of support) from Niagara – at one point they sent up 300 cards; from kids, community members.”

But while Jonker said the number of local residents and federal government workers who support the movement is more than the legacy media is leading on, it’s clear than many in the City of Ottawa – especially those who live and work in and around the Parliament Hill area – are none too pleased with the protestors’ continued presence.

In recent days, authorities have ramped up efforts to dissuade demonstrators.

City mayor Jim Watson, a vocal opponent of the “occupation” from the start, declared a state of emergency on Sunday, citing an alleged “serious danger and threat to the safety and security of residents posed by the ongoing demonstrations.”

Following the state of emergency declaration, city police said that anyone supplying “material supports” (fuel, food, etc.) to the convoy “could be subject to arrest and charges”, before seizing stores of fuel from protest participants.

At a special council meeting Monday afternoon, police chief Peter Sloly told city officials that he wants an additional 1,800 staff members to “turn up the heat” on protestors.

When asked if recent actions from law enforcement, like seizing fuel, could have any effect on the sustainability of the downtown demonstration, Jonker said he’s not at all worried.

“We’re going to be able to get fuel to the truck drivers. We already have people coming up with ideas…one way or another, we’re getting supplies in,” said Jonker. “But it’s sad that the police feel they need to steal our supplies and try to intimidate us.”

“As truckers, we’re used to a little aggravation. Every day on the road we have people shooting us the finger, throwing eggs at us.”

A GoFundMe campaign set up to support the truckers reached over $10 million (CAD) in donations before being shut down by the company at the behest of Mayor Jim Watson and city police last week. An alternative crowdfunding campaign via the site GiveSendGo has since been set up and has raised over $5.5 million USD ($7 million CAD) in just a few days.