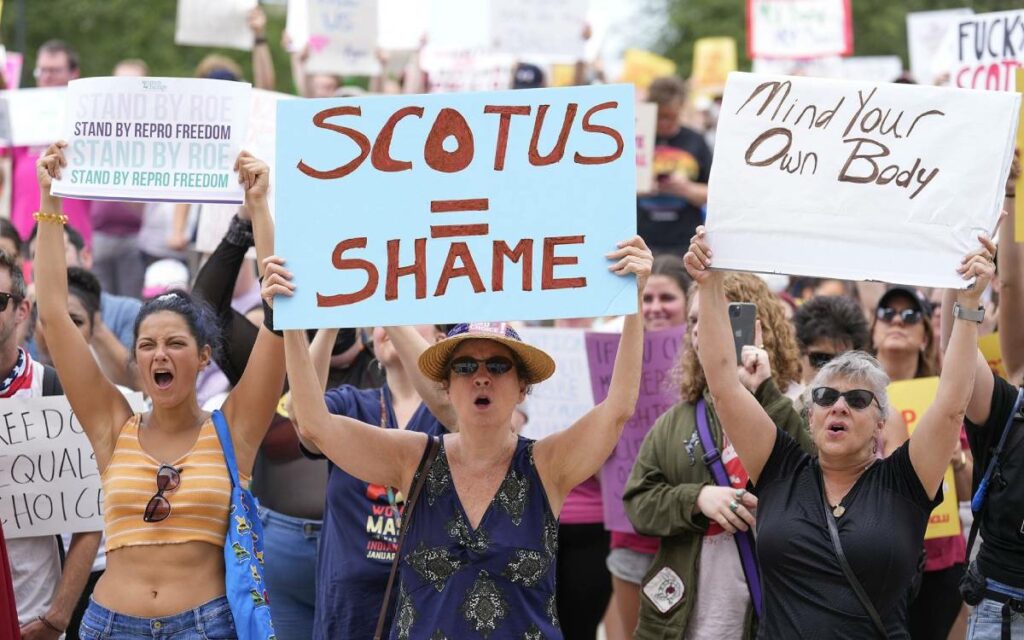 Lost in the politics and hysterics that naturally followed the US Supreme Court’s decision to overturn Roe v. Wade two weeks ago was what actually happened: abortion was not outlawed across the country; the matter was simply remanded back to the states. Photo credit: AP/AJ Mast

The Supreme Court of the United States (SCOTUS) recently overturned the 1973 ruling in Roe v. Wade which created a constitutional right for women to end a pregnancy. The fulminations since have provided more heat than light.

The arguments pick up steam at this point, the facts get fuzzy, the science becomes unsettled, and the politics take over. I propose to stick to the facts and let the other matters sort themselves out.

This decision does not end legal abortion in the United States. The Supreme Court has remanded the matter back to the states, as it was for 185 years of American Constitutional Law. SCOTUS interfered with democratic procedure and ended legislative action that was busily settling the issue throughout various jurisdictions. Each state legislature determined the legality of abortion and its restrictions. In some states it would be illegal at different points and in many states full access would be provided (even funded).

Those in favour of abortion rights muse about how all women living anywhere should have access to a safe abortion. This may be an electorally winnable argument. Last week, however, the Court ruled that abortion is not a constitutional right. The Berger Court of 1973 decided in a 7-2 vote that, “in the early stages of pregnancy, a fetus cannot survive outside the womb. During this time the mother’s liberty interest (choice to have an abortion, if desired) outweighs the state’s interest in prenatal life.”

Norma McCorvey (known in court documents as Jane Roe) based her argument on the word “liberty” contained in the due process clauses of the Constitution’s 5th and 14th Amendments. The due process clause says that no person can be deprived of “life, liberty, or property, without due process of law.” The Court stretched credulity to interpret liberty as the right to an abortion and many legal scholars since, including Justice Ruth Bader Ginsburg, believed the ruling to be flawed, irrespective of their support for abortion rights.

American (and Canadian) jurisprudence is based on British Common Law. Common Law, originating in the Magna Carter, does not address the issue of abortion. It is, therefore, fallacious to argue that abortion is a “constitutional right”. The issue was simply not given specific consideration, one way or another, in the development of the Common Law system. Those who favour reproductive rights for women must persuade state legislatures to pass laws to create such provisions.

Second, many states already have laws protecting the right to have an abortion and this ruling does not impede nor interfere with that legislation. A certain mythology arose two weeks age when the justices ruled. The propaganda that abortion has now been relegated to back-alley procedures, completed with dirty/crude instruments, may serve to motivate women to vote for pro-choice candidates, but does not reflect reality.

States like California, New York and Illinois will continue to offer very liberal abortion services. Corporations as diverse as Netflix, Disney, Goldman Sachs or Apple have all offered to pay costs for employees travelling for this procedure.

The SCOTUS ruling upheld a state law making it illegal to obtain an abortion after 15 weeks. Considering that most abortions occur in the first trimester, this can hardly be seen as some draconian measure.

Abortion rights advocates do themselves no service when they demagogue the issue, exaggerate the record, or overstate the implications. There were three women justices ruling on this case (interestingly, only Justice Barrett, who ruled to overturn Roe, has children) and none on the original Roe ruling. Still, Roe protagonists insist on referring to Justice Barrett as a handmaiden.

No less a figure than the President of the United States, Joe Biden, has joined in this misinformation campaign. When making a statement after the decision was released, the President said, “With this decision, the conservative majority of the Supreme Court shows how extreme it is, how far removed they are from the majority of this country. They have made the United States an outlier among developed nations in the world.” Someone should bring the Chief Executive up to speed because he is off-base.

Abortion laws are relatively strict in Europe. In Poland, it is only permitted in cases of rape, incest or when the mother’s life is in danger. Ireland and Germany ban abortion procedures in the majority of cases after 12 weeks. Italy doesn’t allow abortions after 90 days (just under 13 weeks). France, Austria and Spain ban the procedure after 14 weeks.

The SCOTUS ruling hardly falls outside these norms. Rather, the idea of celebrating abortion as part of the “female experience”, allowing abortions through the full term, or justifying its use as birth control appear far more extreme. What happened to the 2006 Joe Biden? The former Senator is quoted as saying, “I do not view abortion as a choice and a right. I think it’s always a tragedy, and I think that it should be rare and safe, and I think we should be focusing on how to limit the number of abortions.” Biden added that abortion is “always a tragic decision made” and the focus should be on “how to deal with women not wanting abortions.”

The last point explores where things head from here. Now that the justices have ruled the issue will revert back to the people. Rather than appointed officials overruling legislators, those duly elected will be asked to law-make. Since women make up more than 50 per cent of the US population and over 50 per cent of voters, if there are convincing arguments to legalize abortion in some, few, or all forms, then it should be easy to elect governments that favour abortion rights. Threatening or intimidating justices, carrying out violent protests which damage property, endanger people, or break laws diminishes the democratic process.

Most reasonable people know that science can help identify a time at which life becomes viable. Is it at five weeks when a heartbeat is heard? Is it 10 weeks when major internal organs such as the lungs, kidneys, and liver are in place and the fetus begins to move and respond to stimuli? How about at 12 weeks when the fingers begin to open and close, and the mouth starts to suck? Maybe 14 weeks when the brain impulses are firing?

Restrictions can be enacted to restrain gender selection abortion, monitor racial demographics, and for overseeing surgical or chemical abortion procedures. The funding and active support through private and public monies for pregnancy centres should accompany that which undergirds women’s health centres. Regardless, medical science is an inalienable component of this discussion. Legislatures will better be able to determine this as opposed to nine appointed officials.

Surely, a civilized and rational society can come to a basic consensus. Most European allies have done so. The USA, however, cannot agree to legislation that recognizes the reproductive rights of women while also acknowledging the independent life which needs protection. Canada, for its part, has accumulated its own feckless reputation on the matter.

Canadian courts asked our parliament to address the issue in the 1980s. Brian Mulroney’s government introduced legislation in the early 90s that died in the Senate. The next four Prime Ministers systematically avoided the issue like the plague. Our current leader, despite being “personally very opposed to abortion” until some-point in the late 2010s, is now given full perquisite to parade his “pro-choice” mantras nationwide without clarifying his interpretation of the ambiguous term.

Our political leaders of all stripes, from all backgrounds need to step up, show some character, and courageously work together to remove this issue from the public square. It must, once again, become a private family matter within the constraints of reasonable legal parameters, which respect the rights of the mother and the life of the child.