What will be the ballot question for the upcoming federal election? 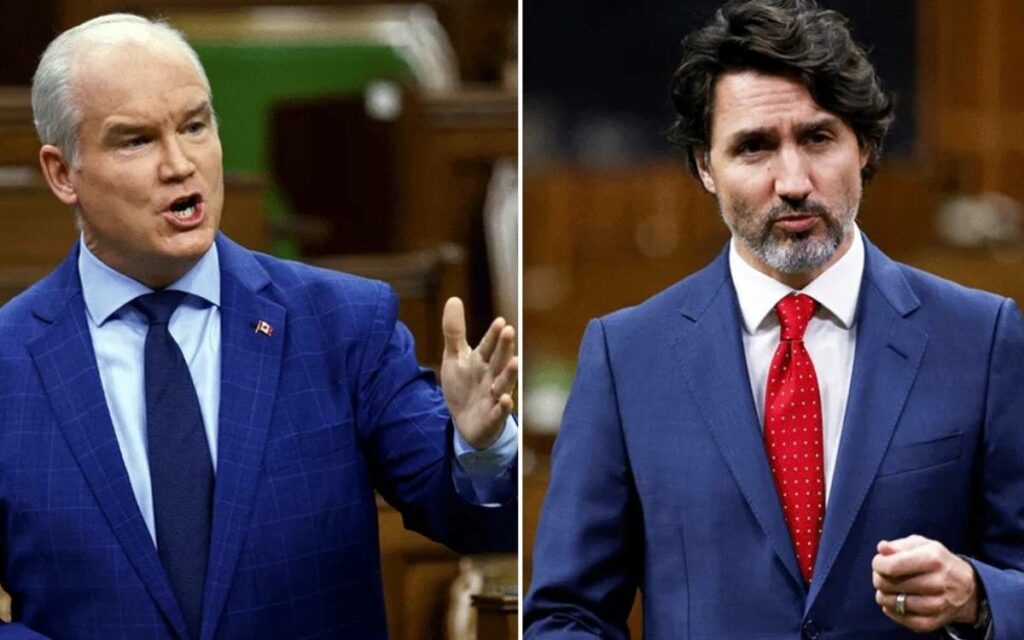 Leader of the Official Opposition Erin O’Toole (left) and Prime Minister Justin Trudeau. All signs point to a showdown between the Conservative Party leader and his Liberal Party counterpart in the very near future. Photo credit: Reuters/Blair Gable via the National Post

It is no secret that Prime Minister Justin Trudeau is planning to dissolve parliament and announce a federal election. The political ecosystem is buzzing with talks of an upcoming election, with every party – and every politico – seeking to guess what the date of the writ drop is.

This election is going to look like no other. As much as I hate to repeat the overused rhetoric fed to us by Trudeau and his team, this election will be unprecedented. A minority snap election in the middle of a pandemic is something Canadians are not ready for. This brings me to my first concern – not many Canadians know that an election is on the way.

Based on data gathered from campaigns, door knockers, and simple conversations, it is safe to say there is a large portion of the population completely unaware that the writ is set to drop any minute now. Canadians deserve to know in advance that there will be an election, to help them do their research and vote for the party they think best represents them. So why is the election speculation so hush-hush?

The question is, what is Trudeau waiting for? Well, there is that sweet spot, when the majority of Canadians are fully vaccinated, restrictions have decreased, COVID-19 cases are stable, and life resembles a somewhat normal state. However, that sweet spot is dangerous and potentially temporary. With schools reopening in the fall and the Delta variant becoming a growing concern, Trudeau knows his clock is ticking for an election call.

All of this work is in hopes of securing a majority government, but does Trudeau really have it in the bag? Well, that’s surely going to depend on the ballot question this year, which might be a little trickier than in previous elections. Ballot questions have ranged over the years from the economy to health care to defence spending and social services. However, this time around it’s going to look a little different.

Securing a majority or even a minority will lay on the premise of the ballot question. Depending on what Canadians care about most, we will see voters voting one way over the other. Except this election is different. We’re seeing Canada at an all-time high level of division which could result in a different ballot question dependent on the province one is in. COVID-19 cases are on the rise in B.C, Alberta, and Quebec. While some parts of Canada are dealing with wildfires, such as B.C. and northern Ontario. It is safe to say Canadians have a lot on their plates, but perhaps different servings.

This implication makes the ballot question a little trickier and more importantly makes it difficult to predict the outcome of the election. Let’s say if we focus our concerns around our economy – specifically the unemployment rates and the growing debt, it is safe to say Conservatives will have a lead. Erin O’Toole has been advocating for the safe return of businesses and the restart of our economy to get our unemployment rates back down. However, if we see the younger electoral population getting more involved and advocating for more social programs, the NDP might come creeping in.

If Trudeau manages to call an election prior to the fourth wave, he might focus on Canada’s progress in terms of pandemic recovery and vaccination rates. This will allow him to gain a few points in the polls, while Canadians are still in summer mode with low restrictions and double dosed.

Nonetheless, if the impeding fourth wave hits sooner than later, Canadians might have a difficult time forgiving Trudeau for calling an election in the middle of a pandemic.

Do Canadians even want an election now? A recent Nanos poll indicated that more respondents were either neutral or upset about the prospect of a federal election than were happy about it. Specifically, three in five Canadians felt an election in the fall might not be necessary.

But leaders have no choice, they sense an election is imminent and they’re forced to embark on the campaign trail – whether we want it or not. They’ll also have to deal with the obstacle of campaigning in the middle of a pandemic and the various public health restrictions in place. Zoom won’t cut it if they want to win big.

With everything pointing to a potential writ drop this Sunday, everyone is wondering: what will be the ballot question in the upcoming 44th election?