Who is Emily Oster and why it matters 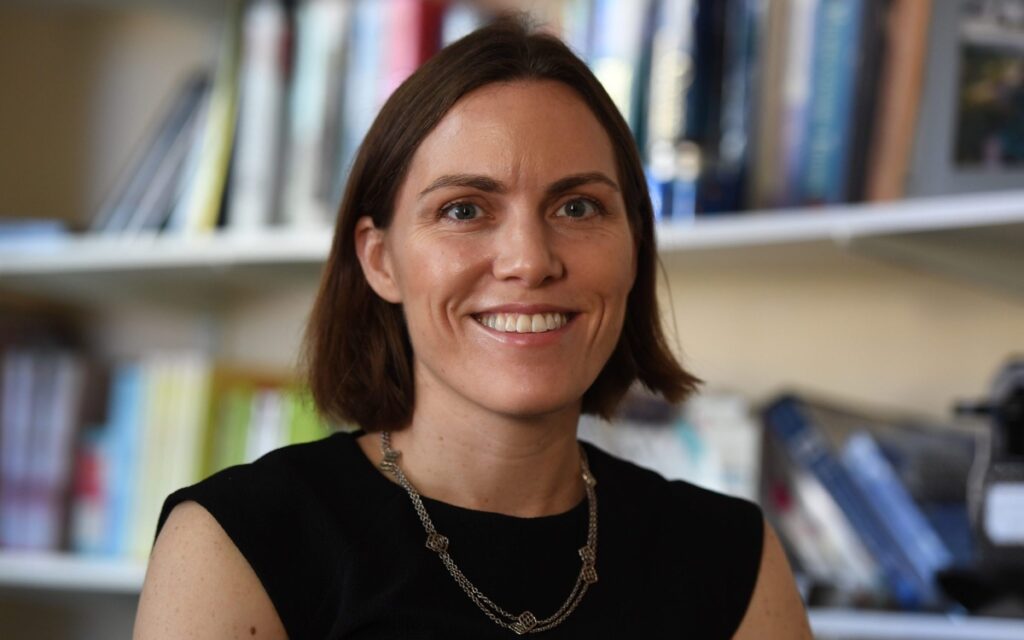 Data assembled and assessed by the Ivy League professor (pictured) conclusively demonstrates that, contrary to union and media-fuelled popular belief, schools are not, in fact, hot spots for COVID. As Oster’s work helped show, school closures were not only unnecessary, keeping children out of the classroom, away from friends, and out of all social and athletic extracurriculars had and continues to have devasting consequences. Photo credit: AFP/Don Emmert

EMILY OSTER is an economics professor at Brown University, and a writer of books on pregnancy and parenting. Her goal: creating a world of more relaxed pregnant women and parents.

This small introduction can be found on the website emilyoster.net. Oster, however, has been a surprising lightening rod in the raging COVID debate about school closures. Her findings about the spread of COVID in academic settings deserve a second look and serve as a reminder to politicians and health officials as a new school year gets underway.

Dr. Oster earned a Ph.D. in economics from Harvard University in 2006. Her curriculum vitae documents a long record of research and writing about education and data-driven results. Oster is a conventional left-of-centre professor who lets the data determine her recommendations. Her latest research proves what a debacle the closing of schools during the pandemic turned out to be.

The demand for schools to close and remain closed throughout most of 2020 and into 2021 hinged on the argument that children were at risk and that they would further put the adults in their life at risk if they attended school. Incredibly, this proposition relied on virtually no data. Oster soon became the authoritative source of COVID-19 spread in American schools. Anna North’s “How Emily Oster became one of the most respected — and reviled — voices of the pandemic” from July 26, 2021 in Vox included the following quote:

By early fall 2020, she (Dr. Emily Oster) had built a dashboard with data on schools from 47 states, serving around 200,000 students. She found very low rates of infection — 0.071 percent in students and 0.19 percent in staff as of mid-September. Those numbers convinced her that schools could reopen without triggering major outbreaks. But it seemed like all she saw in media conversations were pictures of crowded school hallways, paired with the assumption that sending children and teachers back to schools would be extremely dangerous. “The things that people were saying were not reflecting what we were seeing in the evidence,” she tells Vox.

The politicization had long been going on, but now Oster became a target, suffering the attacks from teachers’ unions, a familiar practice to Canadian politicians, health officials, and educators. When Oster wrote an article for The Atlantic in October 2020, entitled “Schools Aren’t Super Spreaders” COVID hawks relentlessly criticized her, some even calling her efforts a “propaganda campaign under the guise of ‘science.’” Randi Weingarten, the President of the American Federation of Teachers opposed most efforts to get kids back in schools. She, along with other union leaders, insisted that children remain at home, learn online, and hope for the best.

The story follows a familiar refrain in Ontario and many Canadian jurisdictions, but recently Oster’s vindication came full circle. A report from the National Assessment of Educational Progress (American) released some devastating data, clearly showing what a disaster the decision to close schools turned out to be. Commenting on the report, Forbes writer Brian Bushard reported, “Online learning and missed classroom time during the Covid-19 pandemic contributed to the first ever drop in mathematics scores and the biggest recorded drop in reading scores among 9-year-old students since 1990”.

As students return to schools this should be a guardrail during coming surges of COVID, the flu, or other viruses. Rehashing the arguments pro and con about COVID measures serves little purpose now, but recognizing the long term consequences of the decisions we make without accurate data, or because a special interest group like a union threatens to withhold support or work against the election of a candidate serves as a poor substitute for ethical leadership.

In the United States, governors like Ron DeSantis in Florida and Brian Kemp in Georgia were pilloried for reopening schools. Teachers’ unions accused Kemp of sacrificing the lives of children while DeSantis faced withering criticism for even allowing beaches to stay open, never mind schools. Those who supported school closures should perform a public mea culpa. Mayors of big cities like Lori Lightfoot of Chicago, Muriel Bowser of Washington, and Bill de Blasio of New York City come to mind as do many Democratic jurisdictions because teachers’ unions, like in Canada, support the progressive left agenda.

When the American Academy of Pediatrics called for schools to reopen in September 2020, teachers’ unions furiously pushed back, accused the Academy of doing former President Trump’s bidding, forcing the institute to abandon its grounded recommendations to appease the political desires of the educators. Later, during the Biden administration, the CDC developed updated guidance for schools, but emails revealed the officials had to check with aforementioned Randi Wiengarten (AFT), reinforcing the idea that these supposedly independent institutions were not issuing health information as much as they were submitting to union demands.

Liberal journalists like Alec MacGillis, covering these issues in Baltimore, wrote truth to power pieces which should have been a warning to progressives that their insistence on following teachers’ union leaders might bear consequences down the road. In a March 2021 article MacGillis wrote for Pro Publica, a non-profit independent publication, he compared the high school experience of students in Hobbs, New Mexico versus those in Denver City, Texas beginning in the fall of 2020, just six months after the pandemic began.

As MacGillis noted, the personal and emotional cost for the students may have exceeded the academic interests. His moving piece documents how one high school junior, Kooper Davis, living in Hobbs, suffered the loss of school and football, perhaps jeopardizing an academic scholarship and potentially a pro career while undermining promising academic prospects. Meanwhile, in Texas, Governor Greg Abbott allowed school districts to decide on their own how to handle the pandemic. Most counties kept their schools open. What MacGillis concluded should sound the alarm for all those who think keeping schools closed somehow kept kids safe and saved lives. That claim is dubious and without merit. The impact on students’ mental health, their well-being, their ability to succeed academically, socially, and emotionally all hinged on obstructing their opportunities to interact because of a disease whose victim had an average age of 80.

The accumulated impact of these policies demand retrospect and reversal. Young people suffering from anxiety, thoughts of suicide, and social disconnect are worrisome trends. Watching gun violence increase, families disintegrate, and students grow addicted to food and video games should serve as a warning to those still comfortable with the idea of school closures. American children experienced some of the most stringent COVID policies enforced. Masks were worn longer and on students younger than in most places across the world. As things stand today, let us hope that the policies implemented in 2020 into 2022 have now been abandoned for good. The health risks for kids remains low. Emily Oster has the data to prove it.

Hopefully this American report will remind Canadian decision-makers that they owe it to the kids and the general public to follow the data, not the dollars when they set public policy.