Why Diefenbaker’s legacy is overshadowed by Pierre Trudeau 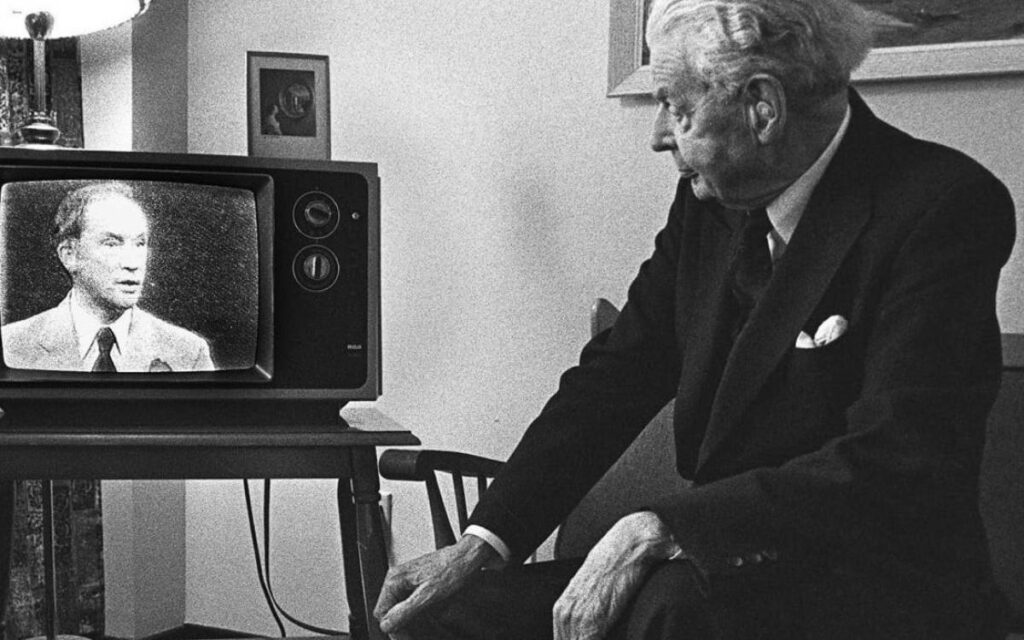 The Athens and Jerusalem-born, enlightenment-dreamed and free-market-based principles that built our country have been gradually replaced by increasingly globalist, relativist and socialist policy initiatives. Since the nation is now understood more commonly through this new lens, it is no surprise that Trudeau, not Diefenbaker, is considered by the masses as the “Father of modern Canada”. Pictured: former first minister John Diefenbaker watches then-Prime Minister Pierre Trudeau participate in a May 1979 election debate. Photo credit: The Canadian Press/Bill Brennan

This coming week is the 43rd anniversary of the death of former Canadian Prime Minister John G. Diefenbaker (1957-1963). Diefenbaker was a pivotal leader in Canadian history. He promoted the first female and ethnic-Chinese cabinet ministers, named the inaugural Indigenous Senator, supported the Anti-Apartheid movement in South Africa and oversaw the enactment of the Canadian Bill of Rights (1960).

These landmark accomplishments served as practical examples of Canadian society living up to its high ideals. Unfortunately, the success of The Chief is typically overshadowed by his second successor, Pierre Trudeau. Understanding exactly why it is that Trudeau has obscured Diefenbaker’s fame requires robust analysis.

Diefenbaker was elected by a populace that had survived two world wars, a depression and a deadly pandemic. These people had a direct connection to Canada’s predominantly agricultural history. Their understanding of freedom was based on tireless work, sacrifice and personal responsibility. Their worldview was also shaped by the traditional values of family and community. They believed the role of government was to preserve civil morality, not regulate the day-to-day lives, commerce and activities of citizens. This is, primarily, the philosophy of government to which Diefenbaker was an adherent.

By the late 1960s, the baby boomers, the largest generation in Canadian history, were coming of age. The boomers, unlike their parents and grandparents, had lived through a post-war period defined by unprecedented luxury, peace and prosperity. Their new definition of freedom was mainly focused on individuality and bodily autonomy. At the same time, however, young people generally advocated for greatly increased regulation of the economy, property, the environment, and more, to enhance their sense of security. It is no surprise, therefore, that this new generation endorsed the zeal of Trudeau to broaden the scope of individual freedom in the realm of sexuality, while also establishing greater state control over the above respective spheres.

Today, many Conservatives argue for less government regulation while also respecting basic family values. Progressives, however, double down on the boomer-defined relationship between freedom and security. Therefore, while they see Trudeau as a “modern freedom pioneer”, so to speak, they don’t really know what to do with Diefenbaker, who to them represents a bygone (and primordial) era.

Our institutions are dominated by those of the progressive persuasions discussed above. To be fair, Canadian establishments are likely not as steeped in partisanship as their American counterparts. This does not mean, however, that ideological predilections have not permeated our educational, entertainment and media outlets.

Trudeau was a champion of the mainstream Canadian progressive movement. His various initiatives, culminating in the repatriation of the Canadian Constitution and subsequent ratification of the Charter of Rights and Freedoms, have elevated his status as the Canadian archetype of a Greek hero cult. It has become widely perceived that pre-1970s Canada was a primitive lumber village. Then, the gallant Pierre Trudeau rolled in and built a society rivalling Camelot. History textbooks, documentaries and talk shows, well-meaning as their authors/hosts may be, have regurgitated this overly simplistic and self-congratulatory narrative for decades.

There is also the issue of cancel culture. We have all seen the disturbing rise in property desecration and the growing desire to snub historical figures because they are deemed as insufficiently woke. Even still, it may seem strange to some, considering that Diefenbaker was so inclusive toward women, Indigenous Canadians and other minority groups, that he would become a victim of cancel culture. Unfortunately, this has happened.

A man born in 1895, regardless of any attempt to right historical wrongs and welcome the contributions/gifts of underrepresented groups, is destined to fail in passing 2020s moralist standards. Jokes, figures of speech, as well as matters of personal belief from the last century will inevitably be out of touch with some of the sensibilities of the current age. It is necessary to recognize this fact if one wishes to fairly evaluate the contributions of those from previous eras. Otherwise, we will understand our ancestors as no more than unsophisticated antediluvians.

Diefenbaker was a storyteller and comic in his own right. He also upheld what some would consider prudish standards of propriety. Couple these qualities with the fact that he was a Conservative politician, and it becomes easier to recognize, despite his incredible legacy of tolerance and inclusion, how he could be blacklisted by excessively woke con artists.

It is worth noting that Pierre Trudeau is not entirely immune to cancel culture. After all, one of his statue’s was vandalized a mere two years ago. However, broader public appeal, a more favourable press corps as well as embroidered attempts by Canadian Liberals to accommodate wokesters generally provides Trudeau Sr. with some enhanced insulation not afforded to many of his predecessors, contemporaries and rivals. Therefore, his legacy remains mostly intact, even during this unconventional moment in which Canadian society finds itself.

All of this is not to say that Diefenbaker himself bore no responsibility. While he was a great statesman, orator and leader, he was also significantly flawed. He drew hard lines on his policies toward Quebec as well as his willingness to negotiate with his American counterparts. Many of his advisors, including an up-and-coming young Conservative named Brian Mulroney, tried to warn Dief that his uncompromising rhetoric would hurt him at the polls. He didn’t listen.

The 1960s were a period of immense change. It was not a question of whether Canada would develop but how it would develop. Diefenbaker began putting his plan into action during his majority mandate. He needed at least one more full term to bring his vision to fruition. After delivering the largest electoral landslide in Canadian history (1958), however, Diefenbaker barely held onto power following the next campaign. The Liberals were back in government less than a year later.

Subsequent elections saw the recalibrated Liberals, led by Pierre Trudeau, completely remake Canada. The Athens and Jerusalem-born, enlightenment-dreamed and free-market-based principles that built our country have been gradually replaced by increasingly globalist, relativist and socialist policy initiatives. Since the nation is now understood more commonly through this new lens, it is no surprise that Trudeau, not Diefenbaker, is considered by the masses as the “Father of modern Canada”.

These are a few of the reasons that Diefenbaker does not receive the credit he is due. Is there any hope that the distinguished former prime minister’s legacy can be reclaimed? Absolutely.

While the Trudeau brand has carried a mystique for decades, there are signs that public opinion is changing. Many of the shortcomings of Trudeau’s policies, specifically the inadequacy of the Charter of Rights, are gradually manifesting themselves. The younger Trudeau has presided over some of the most scandal-prone and financially disastrous years in Canadian history. Finally, the globalist empire, that Pierre-citizen-of-the-world-Trudeau wanted to create, is crumbling. There is a coming metamorphosis that has the potential to turn Canada, and western society, completely on its head.

When it is once again time for Canada to trailblaze the future, the dream of John G. Diefenbaker just might experience a resurrection.

NEXT WEEK: The Real ‘Great Reset’ that terrifies the Trudeau Liberals.