Why the gun debate is so complicated 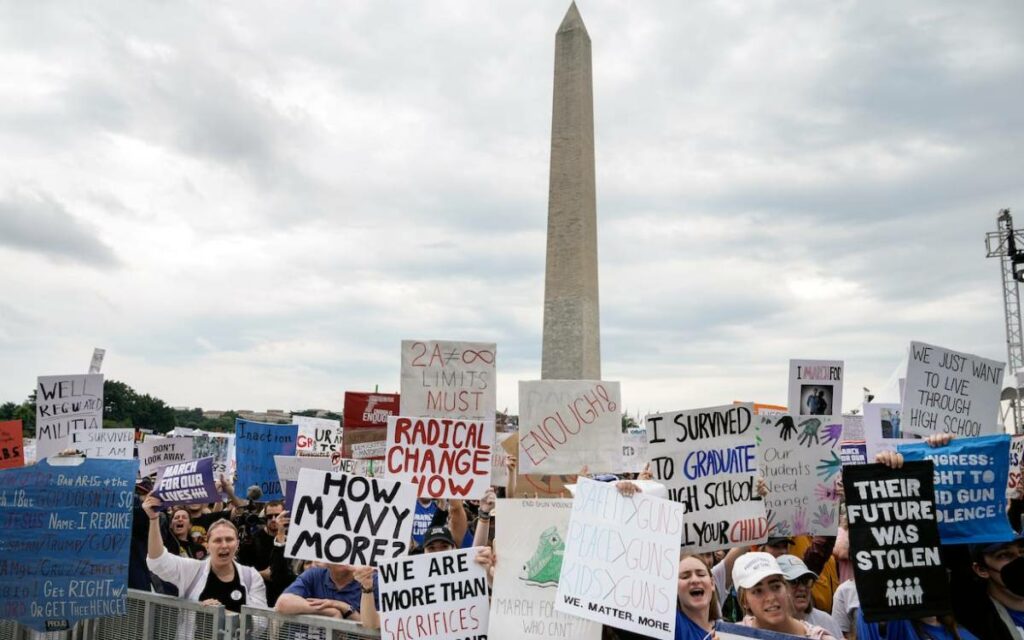 Recent mass shootings in Uvalde, Texas and just across the border in Buffalo, New York have once again brought one of the United States’ most divisive debates to the fore. The dual issue of gun violence and how best to reduce its presence has even made its way into a Canadian context, with public officials at the municipal, provincial, and federal levels all calling for greater gun control in recent weeks. But the issue is not as black and white as some tend to lead on. Photo credit: Getty Images/Drew Angerer

It is appalling and heartbreaking to consider the despicable mass shootings that have recently taken place. Support for enhanced gun control has swelled in the wake of these horrific events. This trend is of little surprise. After all, guns have been used to commit murder, overthrow legitimate governments, and carry out acts of lawlessness. That said, guns have also been utilized to protect innocent life, preserve peace, and defend domestic animals and other important resources.

When embarking on a discussion regarding firearms, many people, including some of our most educated citizens, are surprisingly unfamiliar with the issue at hand. The firearms debate is a ten-foot-deep swamp. Removing the scum at the top of the pond can provide an illusion of progress. Unfortunately, doing so does not adequately address the problem. There are also specific complications that are unique to respective Canadian and American landscapes.

Firearms have served a significant role in protection, provision, and sport in Canada. Explorers, fur traders, farmers and soldiers have utilized guns to complete survival tasks. Canadian history is replete with the essential use of guns during various confrontations. These include the War of 1812, Rebellions in Upper and Lower Canada, the Fenian Raids, the Western Uprisings, and eventually, the World Wars.

Historically, most Canadian young men learned to operate a rifle. Later, rifles were more or less cast aside with urbanization. Pistols have typically been the weapon of choice for city dwellers. Handguns are lighter and easier to conceal. While initially an effective personal protective tool, they quickly became instruments of crime. Lawbreakers began to import their own weapons from overflowing American markets.

The Canadian government has ordered a freeze on the purchase of handguns and has received great support. Canada’s proximity to the United States has facilitated an understandable narrative that gun violence will inevitably increase across Canada without more restrictions. This argument is debatable.

Any new restrictions may comfort those struggling to process the onslaught of depravity that has recently inflicted numerous communities. Perhaps they believe these laws will ensure the safety of their children – something we all desire. Leaders may experience enhanced satisfaction merely by hearing that people are more at ease. A sense of security, however, does not mean a law is necessarily effective.

Support for gun control initiatives is fast and furious in American progressive aisles. President Joe Biden has vocalized his desire to reinstate an assault weapon ban similar to a previous prohibition in effect from 1994-2004. He insists it helped then and will now. While there may be some truth to this argument, the complexities of gun control in the United States are as old as the nation itself.

It is true that the Second Amendment, which provides for the bearing of arms, is not absolute. States can enact laws and institute some restrictions. However, the laws must be drafted with constitutional precedent in mind to survive potential challenges. There are other complications, such as the fact that the United States is home to 300-400 million guns. Across the country, 36 per cent of households possess at least one firearm.

Another issue is the reference to AR-15s as battlefield style assault weapons. This is not true. As Peter Suciu wrote in 1945, a non-ideological publication, “an assault weapon typically is selective fire, meaning it can fire in a semi-automatic mode where the trigger needs to be pulled to fire each round; or in automatic mode where the weapon operates like a machine gun. An AR-15 has no selective fire mode, as fully-automatic weapons are banned by U.S. law.”

Machine gun ownership has been illegal since the 1934 passage of the National Firearms Act. While AR-15s are certainly more powerful than a shotgun they would not be utilized by the United States or NATO during a war.

A leading problem in gun control is law enforcement. There are many examples of people arrested for gun crimes who are then let go. The lack of vigilance by prosecutors to apply the law leads to the perpetrators release and, in many cases, subsequent involvement in a shooting. As one commentator noted, “The Republicans are soft on the front end (allowing easy purchases) and the Democrats are soft on the back end (facilitation, even advocating lax enforcement for social justice reasons).”

It is inaccurate to argue that more legislation guarantees an end to tragedy. If laws are not enforced, adding more to the books only helps ink companies/printers while exposing the vulnerable. It is now time to consider recommendations for practical solutions.

Certain gun control policy advancements are necessary in the United States. It will, however, only take place incrementally. President Biden calling for a ban on AR-15s is unhelpful. There is simply not the support within Congress to pass such legislation. Instead, vocalized support for such bans increases the sale of these exact arms. Raising ages for the purchase of these weapons, extending the red flagging period, or insisting on better background checks are logical, reasonable, and achievable first steps.

Secondly, those in prominent positions must recognize the privilege of said position. These individuals are shielded from American gun culture by armed security. Everyday people find it hypocritical when they believe those already insulated are seeking to restrict their right to self-protection.

Thirdly, prospective police officers must be rigorously and continuously trained for the potential dangers of the job. This means instilling a recognition that the worst-case scenario is a tangible possibility. It also requires enhancing maximum preparedness exercises. In Uvalde and the 2018 Parkland high school shooting, police reticence/mismanagement reveal either poor preparation or absence of commitment to the ideal that a peace officer is ready to pay the ultimate sacrifice. These problems need to be addressed.

Finally, civil leaders must acknowledge that good public policy cannot fix broken souls. Our society is wary to admit that evil exists. We are fascinated with relativism as a means through which we can become more inclusive or tolerant. This disastrous error, coupled with the fact that we are actively redefining bedrock institutions as merely human constructs, has created civilizational calamity.

Until we reacquaint ourselves with moral absolutes there can be no impetus to instill virtue in our children. As John Adams stated, “Our Constitution was made only for a moral and religious People. It is wholly inadequate to the government of any other.” Western society is in trouble because it has embraced a subjective worldview that rejects truth, objectivity, as well as the presence of good and evil. The solution is not merely stricter laws. There must be a return to the high moral ideals that founded the greatest nations in history.

These are a few modest ways to move toward solutions. We can only hope that our political leaders will act with discernment, prudence, and temperance. These virtues were first taught by the Greeks and were refined by Judaism and Christianity into hope, faith, and love. As Christ Himself taught us, “A New Commandment I give to you, that you love one another: just as I have loved you, you are also to love one another.”