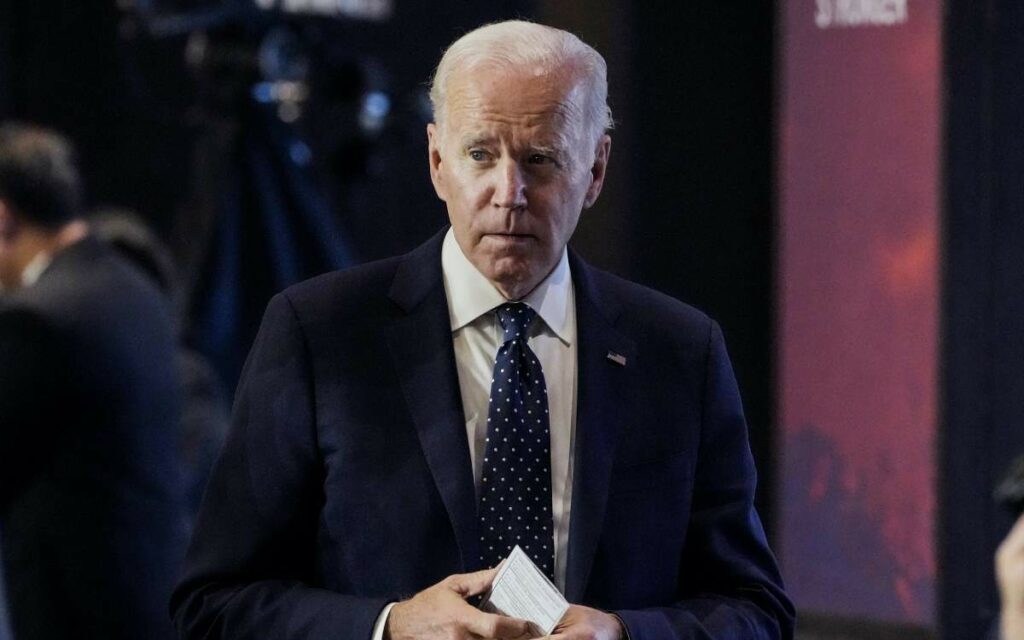 The media clamoured to suggest Trump’s cabinet should invoke the 25th, so why the radio silence now from those same media ‘experts’ in regard to President Biden? It’s abundantly clear the latter’s capacity to lead is severely limited. Photo credit: AP via NBC

Section Four of the 25th Amendment to the United States Constitution states: “Whenever the Vice President and a majority of either the principal officers of the executive departments or of such other body as Congress may by law provide, transmit to the President pro tempore of the Senate and the Speaker of the House of Representatives their written declaration that the President is unable to discharge the powers and duties of his office, the Vice President shall immediately assume the powers and duties of the office as Acting President.”

In the early 2000s television show The West Wing, the kidnapping of fictional President Jed Bartlett’s daughter leads him to ask for the invocation of the 25th Amendment because his judgment on behalf of the nation would otherwise be impaired.

In real life, the 25th Amendment has been used sparingly for very brief intervals since its passage in 1967, but never through anything other than voluntary presidential action. After the severe heart condition of Dwight Eishenhower and the assassination of President Kennedy, it only seemed prudent to have in place some level of clear authority should the president be unable to perform the duties of the presidency and to have a vice-president selected and on hand.

In previous generations, the inability of the president to serve had occurred when James Garfield lay in a coma for eighty days after having been shot early in his presidential term. Meanwhile, after World War I, President Wilson suffered a debilitating stroke which left him pretty much unable to complete his term if not for his wife’s sure-handed management of the White House in his stead. In 1985 President Reagan underwent cancer surgery and while under the sedation, George H. W. Bush, the sitting vice-president, filled the role of acting president during those few short hours.

On a limited number of other occasions, for brief periods of time, the Amendment has been invoked, but as President Biden closes in on his 80th birthday this Sunday, there are increasing concerns that his declining health may force his cabinet to confront the difficult decision of invoking the 25th Amendment, removing him temporarily for some type of assessment, and then perhaps permanently, if he refuses to resign.

One of the troubling aspects of this whole scenario hearkens back to the Trump presidency when media members held little compulsion about suggesting Trump’s cabinet should invoke the 25th because the 45th President’s actions seemed erratic or incongruent with presidential behaviour. These entities had little problem diagnosing Mr. Trump with a variety of psychological, if not cognitive, problems.

Avoiding the obvious questions about their accreditation to draw such conclusions, it seems curious that after watching President Biden for two years, struggling through public appearances, stumbling over basic facts, appearing lost on stage, and looking extremely listless, these media experts voice little to no interest in wondering aloud if Mr. Biden’s cabinet should not discuss the 25th Amendment, if only to protect the nation from any type of foreign attack or calamitous event due to presidential incapacity.

No one knows the exact status of Mr. Biden’s health because no fulsome release of his medical records has occurred. As he hits the mid-point of his term we do have video of him saying odd things (54 states, Armageddon coming, forgetting about a Member of Congress who had recently died, even though he knew her personally); behaving strangely (shaking hands with the air, almost falling off a stage as the Vice-President tried to intervene, falling asleep mid-interview); and looking frail and unsteady (falling off a bicycle, tripping badly several times up airplane steps, shuffling rather than walking).

Whether or not his closest advisors and family are propping him up is speculation, but his need to spend 3-4 days every week in Delaware, his inability to campaign at large rallies, at night; his unwillingness to face scrutiny before objective reporters, and his light daily schedule all present a very limited president with declining energy at best, cognitive impairment at worst.

Whether this requires the 25th Amendment or not, what all this clearly demands is the need to share openly the present condition of Mr. Biden’s mental abilities, especially in comparison to five years ago, or even a year ago. Americans deserve to know the health of their Chief Executive and no political party should be okay with using someone to help them access, acquire, and execute power based on misleading information about policy, finances, training, or health. The Democrats avoiding an electoral catastrophe in the midterms may increase Biden’s prospects for a second term, but the nation needs strong executive leadership at home and abroad. Can Biden deliver that well into his ninth decade?

Hopefully, as the campaign for 2024 ramps up, the President’s friends and family will step up to put America’s interests first and protect Joe Biden from the indignation of aging in front of a nation for which he has confessed undying devotion. These matters, along with the President’s obvious decline in health should help Democrats overcome any temptation to use Biden’s perception as a moderate to shield the Party from its members’ growing interest in nominating a much more left leaning candidate.

Their recent loss of Congress and Biden’s consistent low poll approval numbers may serve as incentives for the Democratic Party, Joe Biden’s cabinet, and his family to step up and advocate for the nation Biden loves instead of seeking the power they lust.