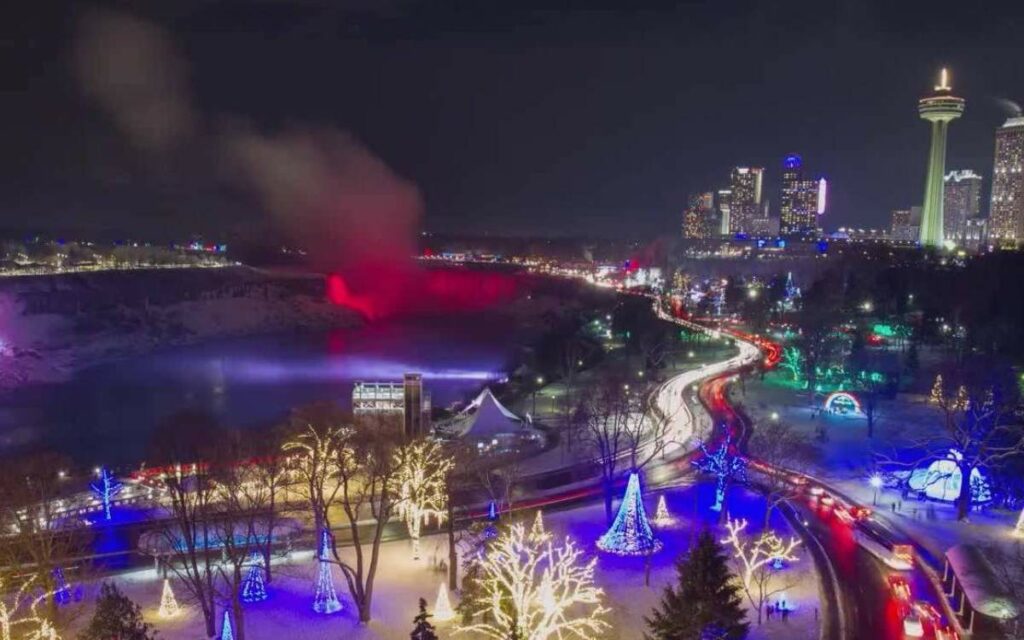 The Niagara Falls Winter Festival of Lights officially kicked off the 2022 season on Saturday.

The elaborate lights show, which runs a full 101 nights until February 20, is celebrating 40 seasons of dazzling displays this year.

To mark the anniversary, there will be several new displays and theme illumination areas, including the Royal Promenade, Frosted Falls, Enchanted Forest, and Great Canadian North, and 40 nights of indoor family entertainment on weekends and throughout the December holiday period at the Crowne Plaza Hotel and Americana Waterpark Resort and Spa.

Also new this year will be the Hot Chocolate Trail, a self-guided tour that features 17 stops and 23 unique drink options, both alcoholic and non-alcoholic.

Celebrated annually since 1982, the Winter Festival of Lights is Canada’s largest outdoor light celebration. It features 3 million lights across 75 large displays along an 8-kilometre route that stretches the Niagara Parkway from Queen Victoria Park through Dufferin Islands and across Niagara Falls.

Patrons can take in the spectacular sights on foot or driving, with paid parking available at various junctures along the route.

The Falls will be specially illuminated each night of the festival. There will also once again be free photos with Santa throughout the month of December and the Misty Kids colouring contest.

Travel along the route is completely free for all.

The festival is presented by Niagara Falls Tourism and supported by funding from the Tourism Partnership of Niagara and principal sponsor Ontario Power Generation.

Find all the display details, festival map, indoor entertainment schedule, and more at the Winter Festival of Lights website here.