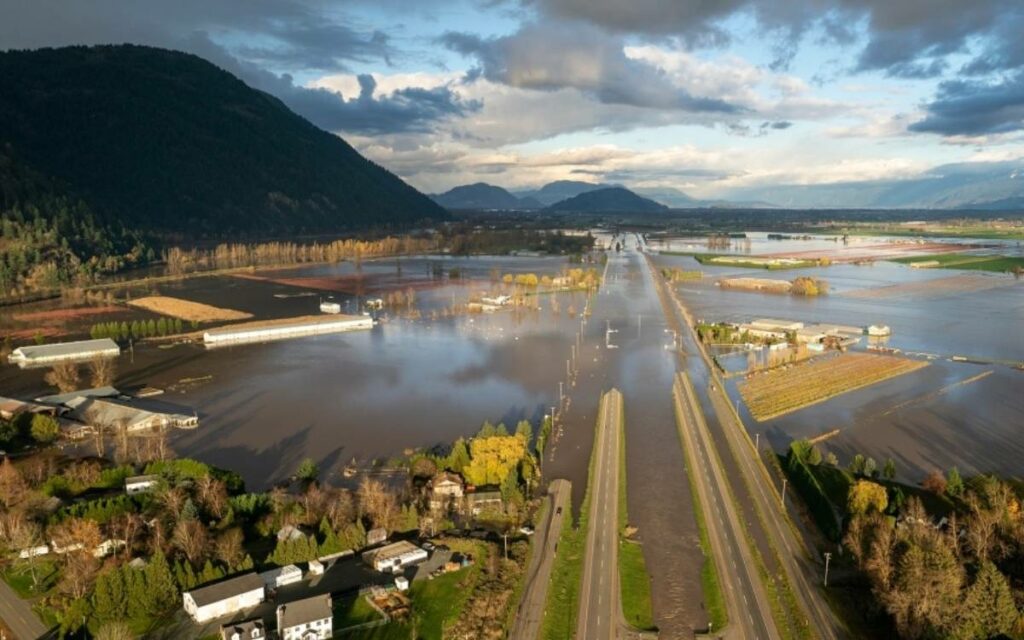 As the economic impact of weather disasters grows, the need to discuss all factors is increasingly important. Pictured is last month’s mass flooding in southern BC. Photo credit: The Canadian Press/Jonathan Hayward

One of the most frequently quoted and but seldom investigated aspects of climate change is the rising costs of weather-related insurance claims.

As losses from severe weather events mount, big reinsurance outfits like Switzerland’s Swiss Re are regular sources of massive, eyeball-grabbing numbers for media stories about the economic devastation of climate change.

Without researching how these big numbers originate.

The business of insuring against losses from bad weather began with the venerable Lloyd’s of London—today Lloyd’s—330 years ago. Its website reads, “In the 17th century, London’s importance as a trade centre led to an increasing demand for ship and cargo insurance.”

Insurance is simple. Collect more in premiums than you pay out in claims. Analyzing what to charge and what can be profitably insured is called “risk.”

For purely commercial reasons, insurers would love to be able to accurately forecast the weather, control it, or both.

When fossil fuel producers question climate change, they are immediately accused of financial conflict of interest. That insurers might be in the same category but for different reasons is never mentioned.

Profits for the insurance industry have always been weather dependent. When multiple IPCC models predicted that man-made climate change increased the risk of future payouts, insurers became plenty nervous. A CIGL podcast in 2017 was titled, “There Are No Climate Change Deniers in the Insurance Industry.”

The report concluded, “The scientific debate is over, with the IPCC…now using the considered term ‘unequivocal’ in describing the certainty of climate change…IPCC has also pinpointed human activity as the main driver of observed and projected warming…Given the stakes for insurers covering catastrophic losses, waiting for proof instead of taking action now would amount to just plain foolish behaviour.”

But emissions aren’t the only human activity affecting insurance. What about procreation? The most frequently overlooked cause of rising insurance claims is more people living in more expensive homes in proven high-risk locations.

And none of the governments declaring “climate emergencies” are telling them they can’t.

The terrible floods in B.C.’s lower mainland in mid-November were immediately blamed on climate change. The new term was “atmospheric river” — clouds so saturated with moisture that taken literally, you could drown above ground.

Shortly thereafter Postmedia columnist Daphne Bramham wrote a piece titled, “Batten Down the Hatches, The Worst is Yet To Come.” It was about more bad weather and more massive insurance claims.

Bramham included a revealing quote from Swiss Re. “Taken together with rapid urban development and accumulation of wealth in disaster-prone areas, secondary perils – such as winter storms, hail, floods or wildfires – lead to ever-higher catastrophic losses.”

Weather is now a “secondary peril”? Apparently, the primary peril has become the very customers the insurance industry exists to serve. The world’s growing population is increasing emissions which cause climate change. And they insist on building more expensive dwellings in known risky locations.

Human demographics and growing wealth are a key driver of rising insurance losses. But it isn’t always reported that way.

One of the most devastated parts of B.C.’s lower mainland was Sumas Prairie. It was Sumas Lake until it was pumped dry in 1924 to create farmland.

Today’s Abbotsford is home to 165,000 people. Since the 1948 floods, 164,000 people have settled in the community. No government agency told them they couldn’t or shouldn’t.

There have been repeated warnings about the condition of the dikes built to protect Sumas Prairie and area. Another huge flood has long been predicted as inevitable. The dikes failed in the big rains of November 2021.

Insurance claims from weather damages are indeed rising. But it’s not entirely the fault of climate change induced storm severity.

Massive economic damages when the next terrible weather event hits Vancouver will not be caused entirely by fossil fuel emissions.

Nor will they be prevented by Canada’s $170 a tonne carbon tax.

The climate file is too important to not include all the facts.

David Yager is an oil service executive, oil and gas writer, energy policy analyst and author of From Miracle to Menace – Alberta, a Carbon Story. More at www.miracletomenace.ca. This article first appeared on the Canadian Energy Centre website on Dec. 10, 2021. Reprinted here with permission.