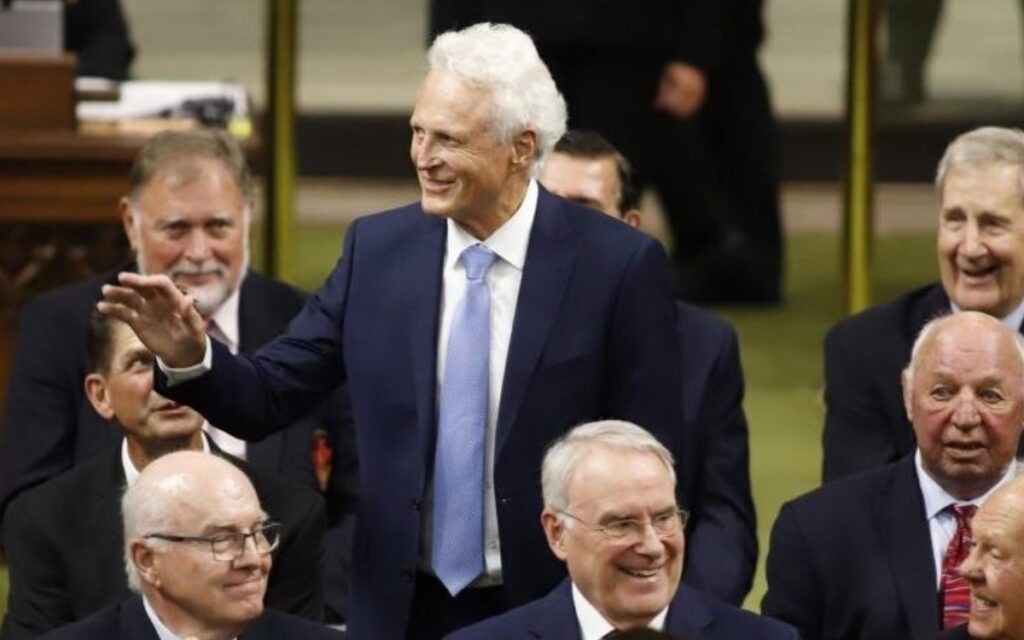 The famed eight-game hockey competition between Canada and the Soviet Union took place exactly half a century ago this month. Below discusses the legacy of the tournament and how it impacted the game in Canada and abroad. This is the third and final installment in a three-part series. Click to read Part I and Part II. Pictured are surviving members of the 1972 squad, including Paul Henderson (centre), at a recent commemoration ceremony at the House of Commons, Sept. 22, 2022. Photo credit: The Canadian Press/Patrick Doyle

Destiny came calling for Paul Henderson in 1972, but 50 years after that glorious September afternoon, he awaits a call from the Hockey Hall of Fame welcoming him as a member. Yet, in an irony that Don Cherry would often point to, the man on whom he scored the goal, Vladisav Tretiak, earned membership into the hallowed Hall in 1989, over 30 years ago. As one of the greatest goalies ever, Tretiak deserves his spot, but what blocks Henderson’s candidacy? His career statistics admittedly fall short of Hall of Fame numbers, but the impact of the 1972 series and Henderson’s pivotal role, scoring the game winner in the last three games, should overwhelm any doubts as to his credentials.

With his health failing and his 80th birthday just around the corner, many wonder why the Hockey Hall of Fame remains immovable as to Henderson’s entry. Perhaps some of the younger voters and writers who make up the committee should review the 1972 Series again and inform themselves of what a key role Henderson played in delivering that struggle to Canada. His career took him to the WHA where he continued to produce steadily, if not spectacularly. As Bob Hepburn, writing for the Toronto Star, recently pointed out, “He’s been inducted into the Canadian Sports Hall of Fame, the International Ice Hockey Federation Hall of Fame and the Ontario Sports Hall of Fame. He’s been made a member of the Order of Canada and the Order of Ontario.” Henderson deserves this honour, let us hope it soon comes to pass.

Coach Harry Sinden, who just turned 90, points out two important changes the series brought to hockey in a recent podcast interview on The Bob McCown Podcast. Primarily, the physical condition of the Soviets far surpassed our pro athletes. The difference clearly showed in the games in Canada and only when the NHL players had some further time in Europe between games 4 and 5 did the level of conditioning begin to even out. This led to training regimes in Canada at all levels designed to improve the physical fitness of hockey players.

As a youth playing hockey, I recall my coaches using some of these programs on and off the ice to increase our strength, wind, and skating. If one considers the amount of money, the strategy, expertise Hockey Canada commits to the sport, much of this can be traced back to the wakeup call the Soviets gave us in 1972.

In addition to improving Canadians’ conditioning, the Summit Series also brought the arrival of Russian and European players to play in North American pro leagues. Some of the early players included Borje Salming, Vaclav Nedomansky, Anders Hedberg and Ulf Nillson. What started as a drip soon became a flow of players leaving Scandinavia. By the 1990s Russian players began to join this group. Today, a conglomerate of players from all over Europe, Russia, and North America make up a league formerly about 90-95 per cent Canadian.

The roots of this go back to the Summit Series and as William McMurtry wrote in his 1973 piece Investigation and Inquiry into Violence in Amateur Hockey, “In talking to numerous players in the NHL and WHA, they feel that most advertising and selling of the game is over-emphasizing the fighting and brawling at the expense of educating the crowds about the skill and finesse… If they continue to encourage the present trends in hockey where skill is secondary to physical intimidation, then it is likely that every other hockey nation will surpass North America in actual hockey skills.” Again, the Soviets, despite the success of brawling teams like the 1970s Philadelphia Flyers, changed the emphasis in amateur hockey amongst the younger players and that has reaped benefits in international competitions and reduced violence in an already physical game.

The Series also initiated a thirst for international hockey. Evidence of this exists even now. As soon as the series concluded plans were being made to extend the competition in a variety of ways. Clarence Campbell, president of the NHL at the time, held reservations and a planned exhibition series to take place in early 1973 against the Boston Bruins, New York Rangers and Chicago Blackhawks never materialized. However, Alan Eagleson, the now defrocked hockey agent, organized the first Canada Cup tournament in 1976 with the support of the International Ice Hockey Federation, Hockey Canada, and the National Hockey League. Eagleson’s most famous client, Bobby Orr, unable to play in 1972, had his last great hurrah, winning the tournament’s MVP trophy and helping Canada to victory, even while his aching knees severely hampered his brilliance.

Tournaments and challenges followed into the 1990s, but in 1995 an agreement made it possible for NHL players to play for their home countries at the 1998 Winter Olympics. This marketing ploy turned genius as audiences around the world watched the games with growing interest through the 2014 Games in Sochi. The nations now competing for hockey supremacy has grown to six primary countries (Canada, Russia, United States, Sweden, Finland, Czech Republic) with a number of countries making great progress, including Switzerland, Germany, and Slovakia. Unlike soccer’s World Cup, many nations will never compete because of weather alone, but hockey, after 1972 in particular, possesses world-wide popularity.

The broadcast rights to the game remains a little told story. Many people assume Hockey Night in Canada owned the rights and distributed them to CBC and CTV, but a much more interesting story exists. McLaren Advertising produced HNIC and bid $500,000 for the series. The owner of the Maple Leafs, Harold Ballard, freshly convicted of 47 fraud charges for which he would serve time in jail in 1973, along with Bobby Orr Enterprises, bid $750,000 and won the rights. As a result, games 1,3,5, and 7 were seen on CTV and games 2, 4, 6, and 8 on CBC.

Foster Hewitt, the legendary play-by-play man came out of retirement to call the games. His TV partner, Brian Conacher, member of the famous Conacher family (including Lionel Conacher, voted Canada’s athlete of the half-century in 1950), an active player, had won the Cup with the Leafs in 1967, and would go on to play in the WHA. He would later call the 1976 Olympic Hockey tournament and then manage Maple Leaf Gardens until 1998. He still lives in the Toronto area. The French rights belonged to Radio-Television Canada. Rene Lacavlier, the Foster Hewitt of French Canada, called the games, with still active NHL star goalie Jacques Plante providing commentary in Canada and Richard Garneau, already in Europe to cover the Munich Olympics, helping with the games in the Soviet Union. Surprisingly, there were US rights to the game as well. No USA national rights were sold, but local stations covered the games in regional areas, making it possible for NHL fans in some cities to follow their hometown heroes. The growth in popularity of the game explains the huge TV contracts the sport now has, helping to generate billions in league revenue every year.

As for some of the team members, further glories awaited them. Bobby Clarke would captain the Flyers to two Cups in 1974 and 1975. Serge Savard, Yvon Cournoyer, Guy Lapointe, and Ken Dryden would lead the Canadiens into another dynasty in the late 1970s, first dethroning Clarke’s Flyers. Still others would enjoy great personal success as Gilbert Perrault, Stan Makita, and Tony Esposito were all inducted into the Hockey Hall of Fame. Most have lived long and reasonably healthy lives, though Bill Goldsworthy died at age 51 in 1996 of AIDS, one of the first professional athletes to have succumbed to the disease. Gary Bergman died in 2000 at age 62 of cancer, but after that, most died at advanced ages, while the majority survive, some into their eighties now, and the rest in their seventies.

This past week many of the players attended a ceremony at the House of Commons, receiving an extended standing ovation from the parliamentarians and then being honoured with speeches from parties of all political stripes, recalling the lessons learned and the fact that, as Bloc leader Yves-Francois Blanchet put it, despite differences between Quebecers and other Canadians, they share the “unshakable conviction that hockey is the greatest sport in the world.” As Canada faces its challenges in the years to come, let us hope hockey will remain a constant, always bringing us together, as it did in 1972 and many more times since.