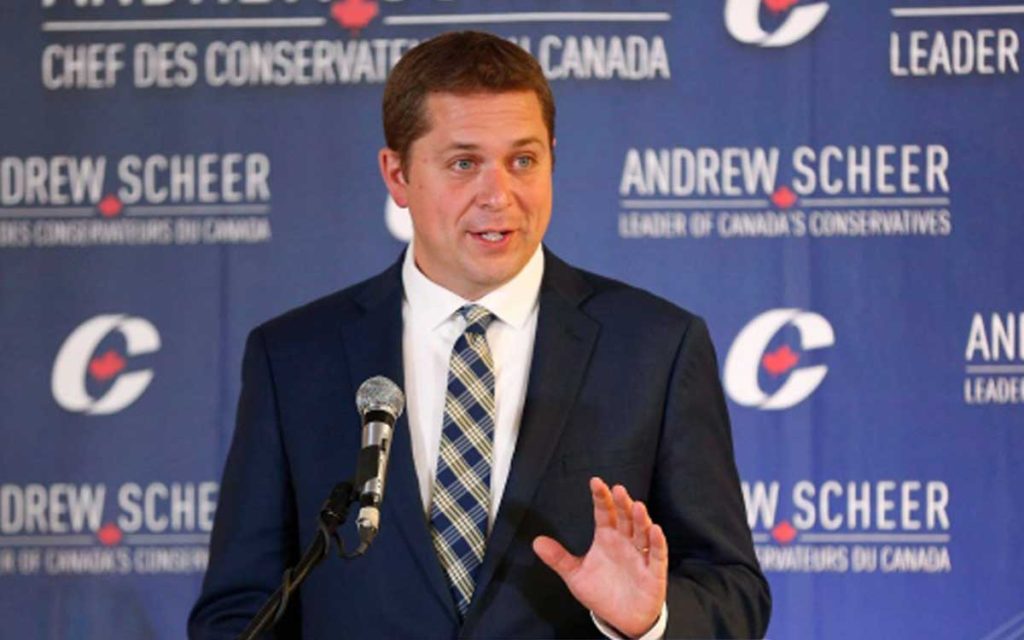 Andrew Scheer will be in Halifax for his first convention as Leader of the Conservative Party of Canada.

A few thousand Conservative party members, MPs and Senators are heading for Halifax later this week, for the party’s first national convention since Andrew Scheer was elected leader last year. The news leading up to the convention and the convention’s agenda, combined with a couple hundred MPs and reporters in one place, promise lots of opportunity for conflict.

With the election campaign just over a year away (or sooner, if the Liberals see an advantage), the conflict that Conservative brass will want to highlight is that between Andrew Scheer and Justin Trudeau. No doubt Scheer’s speech on Friday night will contrast him and his potential government most favourably against Prime Minister Personal Day and his crew of bunglers and lightweights.

Trudeau himself took a few early shots at Scheer over the weekend, in a speech in his riding of Papineau. Trudeau told local Liberals that “even as my conviction in positive politics hasn’t changed, our opponents’ belief in the politics of fear and division hasn’t changed either… Perhaps we can get the smiles of Andrew Scheer, but it remains the Conservative Party of Stephen Harper.”

Trudeau put this theme in action at a rally in Quebec on Sunday. When a woman heckled him, asking when he would pay Quebec the $146 million it has spent on his illegal border-crossers, Trudeau swiftly shot her down. “This intolerance towards immigrants has no room in Canada,” and “racism has no place here,” he told her in French. You must admit that accusing someone of racism is a clever way to get out of paying your bills. I may try that with my credit card company.

He refused to back down from his smear at an event in Ottawa on Monday morning, but unfortunately for him Ontario’s new immigration minister Lisa MacLeod was also at the event. “I think when the Prime Minister, when confronted with some of the problems his government has created, turns around and fearmongers and calls people un-Canadian or racist, (he) really debases the debate that we’re having,” MacLeod said.

Trudeau’s continual self-flattery about his positivity and sunny ways have been a lie for quite a while now. It reminds me of American liberals always saying “when they go low, we go high,” though I can never think of a single time they ever did (unless “go high” can also mean “get high”). Most journalists have yet to call out Trudeau on this hypocrisy. Conservatives hope Scheer will on Friday night.

But no matter how good Scheer’s speech is, another conflict that will no doubt be highlighted at the convention is that between himself and Quebec MP Maxime Bernier. Bernier has been in the news (again), this time because of his tweets questioning the Liberals’ “cult of diversity.” From his tweetstorm: “Having people live among us who reject basic Western values such as freedom, equality, tolerance and openness doesn’t make us strong. People who refuse to integrate into our society and want to live apart in their ghetto don’t make our society strong.”

Max’s tweets put Scheer into an uncomfortable position (again), with Scheer having to address Bernier’s clickbait without (1) agreeing with it or (2) appearing to squelch an MP’s right to express himself, especially when many Conservative voters agree with the MP.

The whole Bernier vs. Scheer dynamic will not be helped by the fact that one of the proposed policy resolutions suggests phasing out supply management. Bernier remains dedicated to the elimination of supply management, even though he suspects it cost him the leadership to Scheer. Like Donald Trump, Andrew Scheer does not appreciate the suggestion that he may not have been fairly elected to his current position.

As is usual at a Conservative policy convention, there are more than a few policy resolutions on the agenda that will be controversial, at least to the media. One of these is to eliminate birthright citizenship unless one of the parents is a Canadian citizen or permanent resident. Another is to have all Supreme Court nominees ratified by a free vote in Parliament, after approval by the justice committee.

In addition to policy, the delegates will also be considering amendments to the Conservative Party’s constitution. Now this is usually deadly boring stuff. But the proposed constitutional amendments include several that take aim at the power and autonomy of the Conservative Fund of Canada, the fundraising juggernaut that continues to rake in millions and funds the party’s election and between-election activities. The Fund’s directors are all nominated by the party leader, and ratified by the National Council.

It was recently reported that Conservative ridings will be required to return half their 2019 election reimbursements to the Fund. This reimbursement is the 60% of eligible election expenses that Elections Canada returns to ridings where the candidate earned more than 10% of the vote. (The NDP and Liberals are apparently going to claw back part of their candidates’ reimbursements also.)

One of the proposed amendments would require the National Council to approve any return of candidates’ Elections Canada reimbursements to the Fund. As the rationale from the Quebec riding of Lac-Saint-Louis argues:

The decision by the Conservative Fund of Canada to require the reimbursement of 50% of election expenses of each EDA in 2019 is unprecedented in the history of our Party and could significantly undermine the capacity of many associations to maintain their operations and prepare for the following campaign. No matter the justification behind this measure it is incumbent on the Fund, to demonstrate more transparency, responsibility, and democracy toward the members of the Party. Any decision of this nature should from now on be approved by a formal vote by the National Council instead of being imposed unilaterally by the Fund.

In the same rebellious vein, another of the proposed amendments would require the Fund to kick back 10% of all its donations to riding associations. The proposal doesn’t say how this money would be divided among the ridings. There is also a proposal that the Fund not contact members for donations more than 24 times a year, whether by phone, mail or email. All of these amendments would take some control from the Fund and give it to the National Council, which is elected by party members.

Rules about fundraising may be boring, but fights about money rarely are. The debate over these pushbacks to the Fund (and indirectly the leader) should prove interesting.