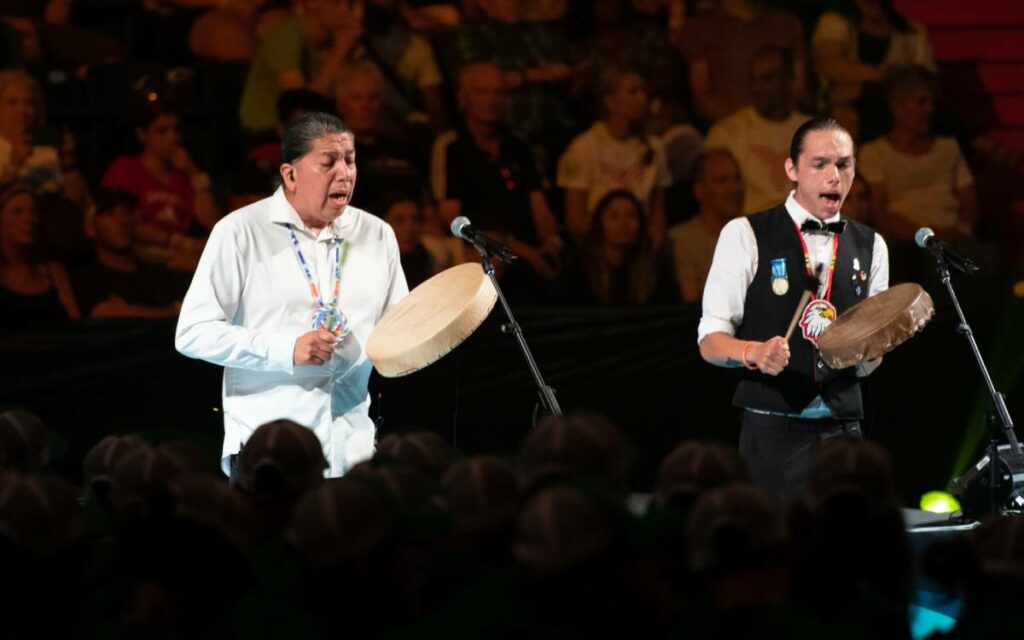 The high praise came from federal Minister of Sport Pascale St-Onge in discussions with host society chair Doug Hamilton. St. Catharines regional councillor Laura Ip, however, believes organizers have made “errors” along the way related to Indigenous involvement, recently renewing a call for more details about a reported dispute with the Mississaugas of the Credit First Nation. Pictured: Indigenous musicians participate in the opening ceremonies at the Meridian Centre, Aug. 6, 2022. Photo credit: Facebook/Niagara 2022 Canada Summer Games

One month ago, the Mississaugas of the Credit First Nation (MCFN) withdrew all affiliation with and support for the Niagara 2022 Canada Summer Games, which is currently taking place at various venues across the region.

In a relatively vague open letter posted online July 11, Chief R. Stacey Laforme said the MCFN did not agree with organizers signing a memorandum of understanding with a consultant to coordinate the Indigenous programming and cited “disrespect” and experiences of “lateral violence”.

According to Amy Bombay, “Lateral violence can occur within oppressed societies and include bullying, gossiping, feuding, shaming, and blaming other members of one’s own social group as well as having a lack of trust toward other group members.”

In response to the situation, St. Catharines regional councillor Laura Ip, who herself has voiced opposition to the Region’s involvement in the games and refused to attend any of the competition’s events, asked staff at the municipality’s July 13 Corporate Services Committee to produce a report on what happened with the MCFN and what will be done to repair the relationship.

Though staff did not deliver the report at the committee’s latest meeting on August 10, Niagara 2022 Host Society board chairman Doug Hamilton stepped away from his duties with the ongoing competition to address members Wednesday morning.

In a brief presentation about organizers’ general relationship with various Indigenous partners, Hamilton relayed views previously expressed to him by Canada’s Minister of Sport Pascale St-Onge and her staff.

“The feedback that we’ve received from them on this issue is that…we are the most inclusive Canada Games ever.”

In fact, as Hamilton explained, the federal government said the Niagara games’ inclusion of Indigenous communities has established a “best practice” to carry forward.

“We have set the bar (for future events).”

Since the early planning stages of the Canada Summer Games, the Niagara 2022 Host Society has gone to great lengths to ensure full and appropriate inclusion of Indigenous voices in all aspects of the two-week competition.

Back in August 2020, event organizers announced the creation of the Indigenous Partnership Council (IPC), the first time in Canada Games history any host society entered such an agreement.

Ultimately unsatisfied by Hamilton’s presentation, at the end of Wednesday’s meeting Councillor Ip once again asked regional staff for a report at the committee’s next assembly on September 14.

Chief Laforme nor any other members of the MCFN have publicly elaborated on the decision to withdraw support since initially publishing the open letter last month.

The Canada Summer Games commenced with opening ceremonies at the Meridian Centre in St. Catharines on August 6. Competition wraps up August 21.