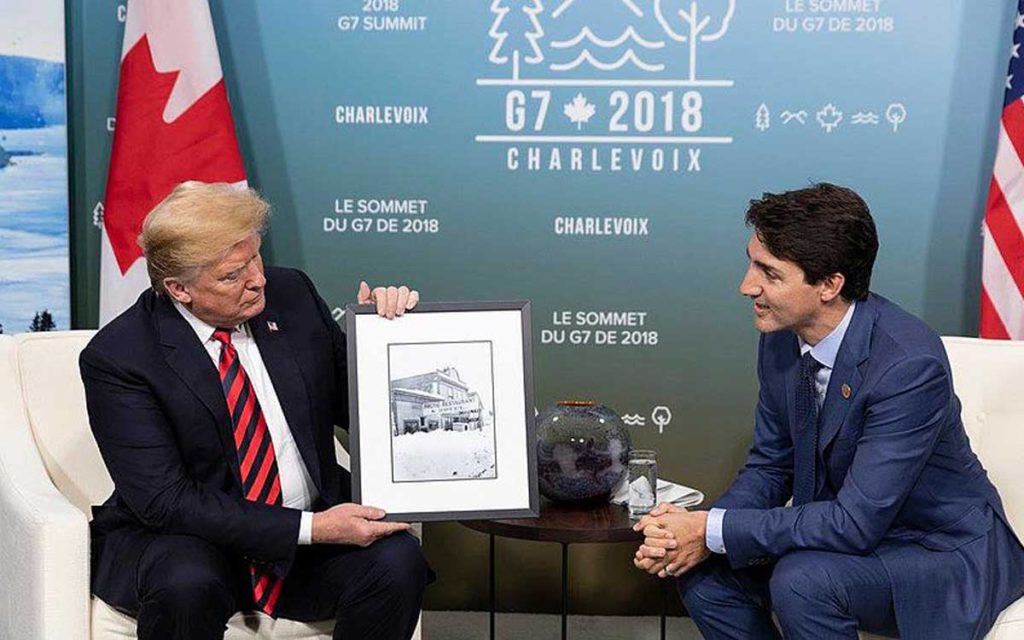 Over the weekend, the CBC website carried a story originally reported in La Presse, about gifts that Justin and Sophie Trudeau received at last month’s G7 meeting in Charlevoix, Québec.

Unfortunately, the CBC buried the lede: Donald Trump gifted Justin Trudeau with a photo from the 1983 G7 meeting attended by Pierre Trudeau, Ronald Reagan, Margaret Thatcher and other world leaders of the day.

Trump giving Trudeau a photo featuring Reagan and Thatcher struck me as akin to Angela Merkel giving Trump a framed handbill from Stormy Daniels’ latest gentlemen’s club appearance. Or Trudeau giving Trump a photo of Trump’s grandfather’s hotel in British Columbia, that was also a brothel. Oh wait, that last one actually did happen.

But on reflection, I doubt that Trump’s intent was to rub Trudeau’s nose in the outsized legacies of Reagan and Thatcher. Last year when visiting the White House, Trudeau gifted Trump with a photo featuring Trump honouring Pierre Trudeau at a 1981 dinner in New York. Trump apparently appreciated the photo, saying to the media in front of Trudeau: “what a great picture. I will keep that in a respectful place.”

Given how the G7 ended between Trump and Trudeau, it seems unlikely that either photo is in a very respectful place today. Nevertheless, Justin and Sophie received some impressive loot from G7 leaders, including a Hermès scarf and necktie, a Japanese makeup brush set, and a Sèvres porcelain plate.

Under the Conflict of Interest Act, Trudeau and other public officials must declare all gifts worth more than $200. If the value of the gift is more than $1,000, the gift must be forfeited to the Crown unless it is cleared by the ethics commissioner. As the CBC story explained:

Items with short shelf-lives, or personal items such as scarves, purses, watches or pens, can be put up for government auction. In some cases, items are donated or destroyed.

The previous ethics commissioner apparently allowed public officials to keep gifts in excess of $1,000 if they reimbursed the value above $1,000. Trudeau has accepted two gifts worth more than $1,000 and reimbursed the (undisclosed) difference, one of them an LETV smart bicycle from China. When the bike gets stolen, I’m sure the Chinese military will be happy to locate it for Justin.

Apparently, the Hermès tie and scarf, Japanese makeup brush kit and Sèvres porcelain plate all fell within the $200-$1,000 range, and the Trudeaus have kept and declared them. While Trudeau is infamous for his socks, luxurious Hermès accessories and pricey Japanese makeup brush kits are not in keeping with a modest, middle-class image that the Trudeaus want to present going into an election year. (That’s also why they put their nanny on the payroll now, to avoid the issue coming up again.)

In the interest of maintaining both diplomatic courtesy and a down-to-earth image for the Liberal government, I offer the following suggestions for gifts under $200 that may safely be given to Justin and Sophie:

Ford Nation; Crazy Town; Mayor Rob Ford: Uncontrollable ($65 for all three). These are three books written by Rob and Doug Ford, Robyn Doolittle and Niagara Independent columnist Mark Towhey. Like the arrival of Donald Trump, the arrival of Doug Ford as Ontario premier is going to make life more difficult for Justin. These three books will give him an idea of what he is in for, if Doug’s pledge to stop the carbon tax hasn’t already given him a hint.

Hanes or Fruit of the Loom T-shirts ($15 for a package of three). Poor Justin is often seen jogging shirtless. This leads to chafing, sunburn and being stopped for selfies with adoring fans.

Bong ($50 and up). Marijuana is set to become legal on October 17th (despite the police and retail channels being far from ready to, uhm, roll), Justin and Sophie should have at least one accomplishment to celebrate, and something to look forward to.

Oh Henry! 4:25 bar ($1.39). Earlier this year, Hershey Canada launched this item to capitalize on legal marijuana, then anticipated for July 1st. Legal pot is not here yet, but addictive sugar is a good substitute.